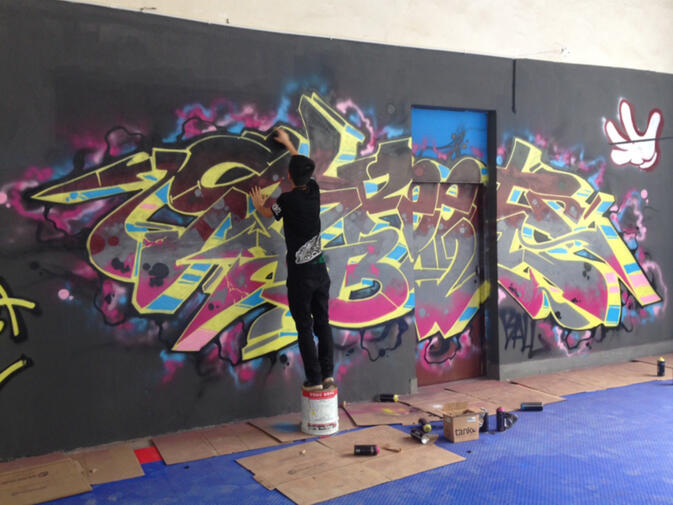 While modern graffiti art's birthplace is recognized as New York City, taggers of a sort have been marking walls and almost anything else in China for thousands of years. Since at least the Han Dynasty, poets have carved their calligraphy onto Chinese landmarks in the name of art, political protest, and the pleasure of seeing their own names immortalized.

Graffiti art has yet to catch on with most Chinese youth, but the graffiti community is growing, slowly. Here in Kunming, one of the most prominent of these artists is an 18-year old bomber and professional wall painter who goes by the pseudonym Ran Pu (燃瀑). GoKunming recently sat down with Ran to talk about street art, sell-outs and Chinese parents.

GoKunming: Why were you first interested in this kind of art?

Ran Pu: Well, to understand this kind of art, you have to realize that it comes in very different kinds. There's graffiti art in the West, which usually means going out and marking all over the place, tagging your name. In China, maybe because of cultural factors, doing graffiti isn't really about that, it's just something that's cool to do at first. At first, you get the idea that it looks pretty good, so you go out and experiment on walls and such, and you get better.

GK: At first, where did you paint your graffiti?

Ran: Back then, I just went out on the street and found some secluded walls, or alleys, or corners — that kind of thing. I was fourteen when I started. I was really nervous, of course, but so excited. It was such a rush. Kind of like listening to rock music.

GK: How did you learn?

Ran: Um, I just went out and practiced it. A lot. And I used the internet. In the United States, and other places, beginning taggers can see graffiti art from all over the place and copy it, but for us in China we just have to imitate what we see on the internet, then go out and practice on the streets. 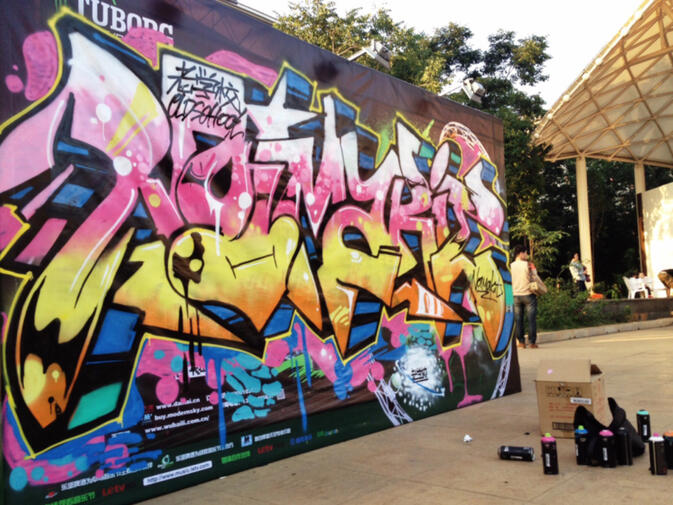 GK: While you were practicing, did you ever get caught?

Ran: Of course. Starting out, you'll always get caught sometimes. But I think we have it easy in China because the law doesn't really have any anti-graffiti measures. At first, I didn't have any clue about graffiti law, so I just went around and painted. And I did get caught. The punishment is light — just things like going to classes or paying money for damages. Sometimes I didn't even have to pay money, the owners just had me paint over what I had done, and let me off because I was a kid.

GK: So were you interested in other kinds of art as well?

Ran: I think generally, graffiti artists in China are interested in fine arts. Outside of China, like in the States, taggers are often non-artists, gangsters — that kind of thing. They just like bombing and illegal graffiti. Because it's exciting.

Ran: Well, the origin of graffiti art is in illegal bombing, or tagging. I think the most essential, pure kind of graffiti, will always be old-school bombing. But the scene has started to change, with things like art graffiti and high-end street art. Nowadays, there are less and less bombers out there. It's because bombing is anti-mainstream in its essence. You know, it's not accepted by people. I do think that bombers deserve a lot of respect. But those who do graffiti art have more potential to develop, in some ways.

GK: Who are your favorite graffiti artists?

Ran: I like a lot of artists, it depends on the type of graffiti. Like in America, there's MSK and there's BTM Crew — they do a lot of illegal, anti-government graffiti. Those guys have my respect.

GK: What about famous graffiti artists, like Banksy for example, who get a lot of attention and money for their work? What's your take?

Ran: My take is — they're stupid. The original, pure form of graffiti is illegal graffiti, bombing. Guys who make a lot of money selling "graffiti art" — they're not even graffiti artists. They're just wall painters. There's a big difference. 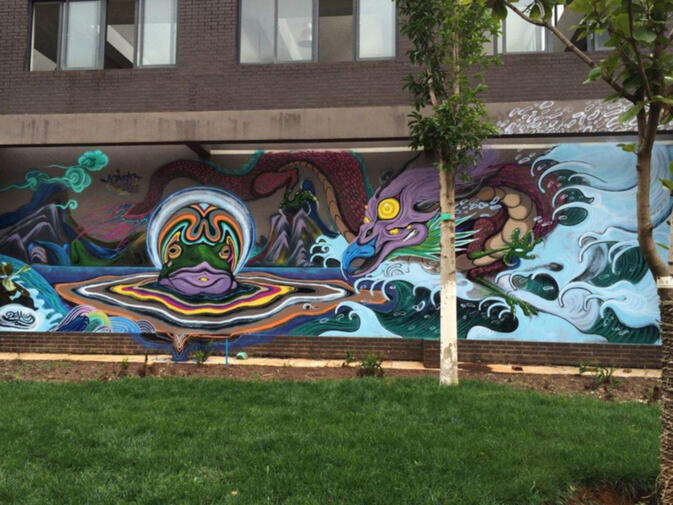 GK: Do you know people who do graffiti solely for money?

Ran: Definitely. There's some who do it here in China. I think when someone calls himself a graffiti artist and sells out for money, not doing it for the right reason, not getting fun out of it — I think that's stupid.

GK: So why do you do graffiti?

GK: When did you start doing professional graffiti art for businesses?

Ran: Um, about the time I felt like I'd really mastered spray cans. A couple of friends knew I did graffiti, and they asked me to come and do some art. It's much more relaxed than illegal bombing.

GK: Do you have a favorite art piece you've done?

Ran: That's hard to say. For my illegal graffiti, there's been some work that I've done in really hard-to-reach places, like train bombings. And second-floor bombings, where you have to be in some very dangerous places. Some of those I've been quite proud of. As for professional stuff, to be honest, it's all the same to me. It's just wall painting, I do my best, but it doesn't really count as graffiti.

GK: What kind of professional businesses have asked you to do wall painting?

Ran: There's been lots of them. My crew and I have a studio, where we do all our graffiti work, and we do a lot of business art just to make money. We've painted for hip-hop dance studios, restaurants, bars, music festivals, lots of those types of things. But we also like to go bombing, and make our own illegal graffiti.

GK: So you and your crew, do you guys have day jobs or are you in school?

Ran: I'm in school. A lot of us are. Because once you get a job, it's hard to find the time to stick with graffiti. There are lots of graffiti artists who work in tattoo parlors as a side job, because a lot of what you learn by tagging — letter design, and so on — it helps you directly in doing tattoo art. 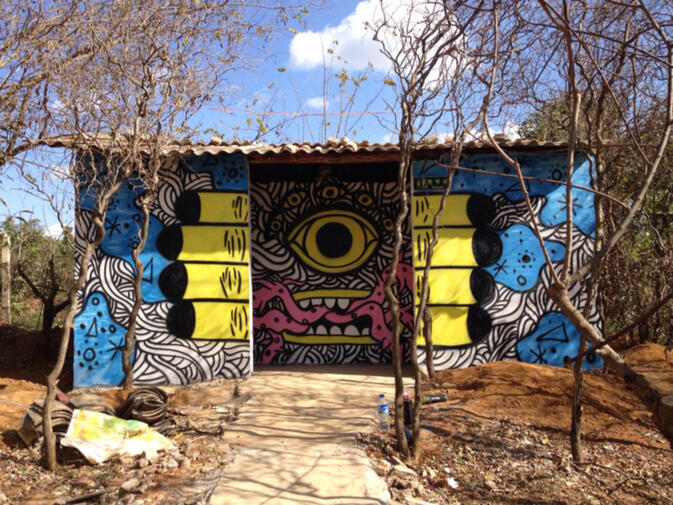 GK: What are your own plans for after graduation? Get a job doing graffiti art?

Ran: No. That's impossible here in Kunming. In China, graffiti is a very small subculture, and there's not much money in it. I might end up going into tattoo art. But I don't know.

GK: What do your parents think about what you do?

Ran: Um, they have no idea. They don't really grasp the notion of graffiti art at all. Sometimes they'll say, "Oh, stop doing so much illegal stuff", or whatever. But they think basically, if you can earn money doing it, it's not a big problem. That's their only opinion. They're not really for or against my graffiti.

GK: Would you say there are a lot of graffiti artists in Kunming?

Ran: Not many. Graffiti is not really part of China's culture and even people who paint graffiti art rarely do illegal bombing. I'd say there are about a dozen or so artists in Kunming right now.

GK: Do you work with any of these guys?

Ran: Yeah, occasionally. We'll go out and do some bombing together or pick a wall and do a piece on it. I met the guys in my crew through the graffiti community here. It's a very small group made up of people from a lot of different little artist's circles. You know, we hang out, and other than doing graffiti, we're just like regular people. We like to meet up, get some beers, talk a little and listen to hip-hop. It's all very chill. 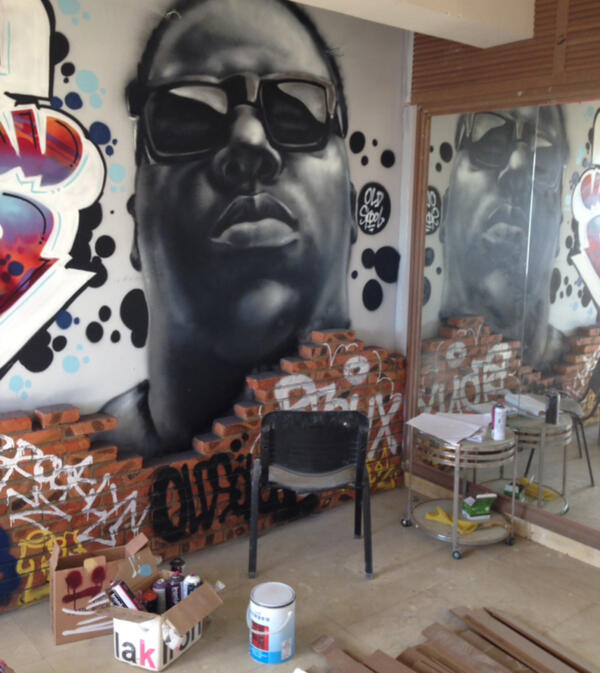 JianSheLu looks a real mess in the mornings when the shop shutters are down - naff spray-painted names everywhere. The photos in this article are very much the exception to the more common idiotic scribbles.

yeah....those idiotic scribbles as you call it are throwies by some really old school taggers in kunming and dali. those are throwies, basically i was here message. if you see their art work that. takes more than 2 seconds youd be amazed. you usually dont see those in public areas. cans are fuckin heavy and loud. as you can see in the picture he has a case, try lugging that around while running from the poh poh.

Fingers crossed for articles on pick-pockets and illegal street vendors next.

I demand a firing squad.

Impact of Oil-market Shock on the Global Economy