Not everyone has time to explore random subway stops on the far outskirts of the city. But three unpaid GoKunming interns sure do. In this series, we traveled west along Kunming's Metro Line 3, visiting the areas surrounding four stops along the way to inform your possible future escapades.

Our goal was to better understand the who, what, and where of the new artery connecting Kunming's core to the far-flung regions that surround it. Check out our previous articles in this series, "Mystery at Mianshan", "A landscape in flux at Chejiabi" and "The Fading Charm of Shizui's Hilltop Park".

Draped in ill-fitting orange robes and dangling a cigarette from his lower lip, the monk calmly sauntered away from the red bits of paper shrapnel rocketing towards him, all as if he had not just lit off a round of deafening fireworks. Somewhere on the hillside below, a curious middle schooler decked out in a bright orange windbreaker zoomed down the road on his hoverboard. These were our first impressions from Dayu Lu Station for the fourth and final installation of our Around Town series on Kunming's Metro Line 3.

Surfacing from the neurotically clean world of Dayu Lu's underground station, we peered out the dust-encrusted window of the aboveground metal and glass hood to an eerily familiar view. Everything was wide expanses of freshly set cement and asphalt, the sun and wind alternately baking and blowing around a special cocktail of tiny concrete particles. 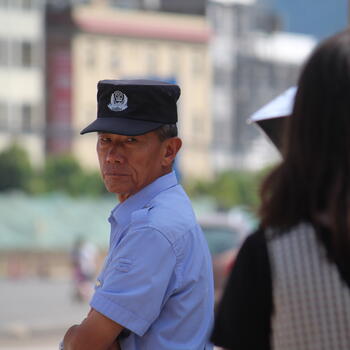 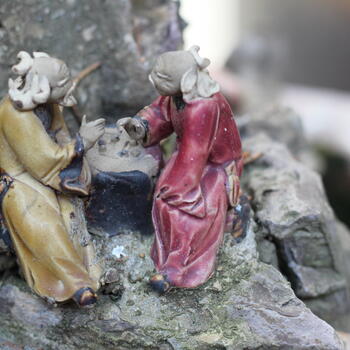 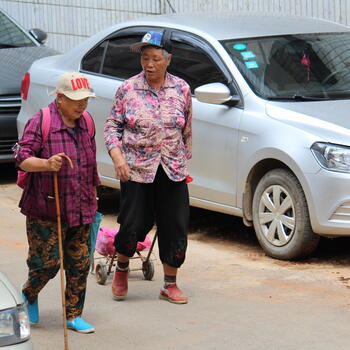 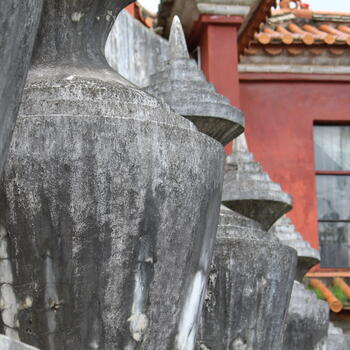 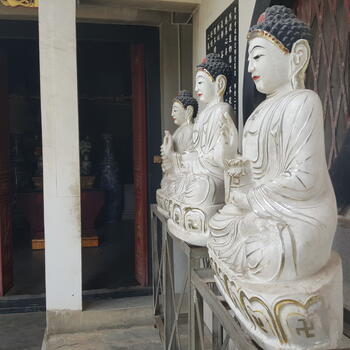 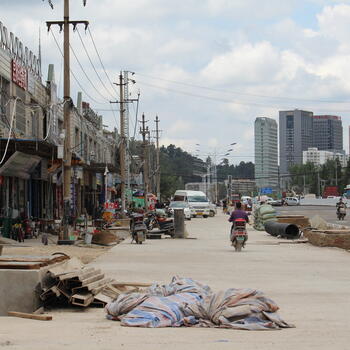 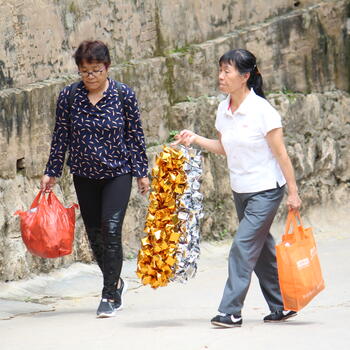 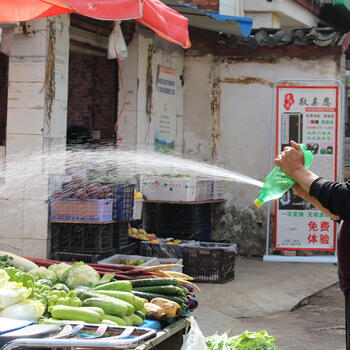 To escape the station, we snaked around propaganda posters in all states of disrepair. They were ostensibly set up to contain the construction surrounding the metro stop, but some had been unceremoniously defaced. As we neared the end of a maze of cartoon officials instructing us in the finer points of civility, the path opened up onto a moat of soupy brown water forded by regularly laid but un-mortared stone slabs. To our left, the station's looming black sign-pole was caked with splotches of dried mud.

Having crossed the moat, we took stock. We had come to Dayu Lu on the recommendation of our impromptu guide at Shizui the week before. He had told us about a bustling market supposedly located at Dayu Lu. The first shopkeeper we approached, however, said she knew about nothing of the sort. An elderly woman with long, clipped gray hair, she suggested we try going to Kunming, the words just barely making it past her long grin.

Go to Kunming? Were we not already in the city's Xishan District? The enterprising grandma wasn't sure, and a colleague that had been busy washing potatoes turned around, somehow maintaining her squat, and clarified that this was in fact Xishan District. Her shock of curly auburn hair, business slacks, and short black heels conveyed a palpable confidence while she explained that we were currently in the jiaoqu, or suburbs.

Any hope for reaching our intended destination dashed especially early, we continued onwards nonetheless, past storefronts selling incredibly specialized and mostly unrecognizable mechanical parts. Maybe these were replacement valves for industrial vacuums, maybe those were counterweights for power lines.

Further down the road, an enormous mound cloaked in green netting forced us around its massive base. Straining against the harsh sun, we were just able to make out the shape of a yellow ofo bike sitting atop its peak. As our eyes adjusted further to the brightness, we realized in horror that beneath the netting was neither dirt nor construction debris, but instead the metal corpses of dozens of discarded ride share bikes, a mass grave dedicated to planned obsolescence.

The road then split, ahead looking like more of the same, but to the left a smaller lane looked promising. Both sides were filled with surprisingly large, bright, and populated shops, those closest to the intersection strategically occupied by restaurants. Ahead, high-heel and leather goods stores seemed an unexpected luxury for what was "not Kunming", but copious amounts of barbers, dentists, and milk stores confirmed this area was more like the city center than we perhaps anticipated.

We rounded a tight corner and the lane ahead abruptly became an un-delineated and narrower cement path that snaked up a hill. At the path's base we witnessed a clump of old ladies divide in two as if choreaographed, with waving hands filling the space between the cleaving entities.

Turning up the road, a steady stream of the elderly accompanied us, many dressed shockingly similarly to the current crop of American mumble-rappers. A few of them lugged sacks of unidentified red and gold polyhedrons up the hill, including one ambitious geriatric cyclist with a good-sized cushion strapped to her back. The air suddenly popped, and the millisecond embolism that accompanies every lighting of firecrackers stopped us momentarily. At first assuming we were headed towards a wedding, the near-silence following the pops and hisses carried the faint beating of drums.

Instead, signs for Baozhu Temple told us where we had stumbled, and Buddhist esoterica inscribed into a four-meter tall marble plaque to our left symbolized the end of any paved thoroughfare. Passing the cleric pyrotechnician, we entered through the colorful front gate to meet a glass-encased statue of the Laughing Buddha sitting in a dark concrete chamber. To both sides there were short passageways around the chubby golden deity.

Behind the statue, the paths met and opened up to a scene that can only be satisfactorily described like many reviewers explain their trips to Cirque du Soleil — "A Feast for the senses". The temple's interior came to us through nearly every sensory channel — green vegetation covering gray structures, fragrant incense assailing our noses, birdsong and beating drums filling the air.

Directly ahead, out of a lily pad-covered pool of blooming lotuses rose a white tiered tower, small arhats gazing out from each level. Passing a group of amused card players and an incense stand manned by an aged Bai minority woman, we zeroed in on the source of the percussion. It was a dim hall jutting out from the hilltop and overlooking the valley below. The hazy, incense-filled air, rhythmic reverberations, and trance-like chanting all combined to create that special, other-worldly brand of sacredness unique to the East.

Milling in and out of the room were monks and grannies carrying the same red and gold paper shapes we had seen being hauled up the hill earlier. The busy attendants shuttled the shapes to be burned in a covered pit, the smoke joining with the incense haze and floating skyward, carrying requests for wealth and health into the wind.

Opposite the monks' chamber were stairs to yet another level, this one ringed by shrines of warrior gods, elephant riders, and the like. The central patio was a maze of bronze cauldrons and tiny penjing, miniature landscapes created in pots. A local man sat in between an amphibian-filled pond and some enthralled weiqi players, resting for a bit before fetching hot water for the monks.

We departed, and as we descended from the elevated platform of shrines, down past the chanting monks, burning offerings and incense vendors to emerge back into the sunlight, we were astounded by the realization we had forgotten about the world outside. Continuing further down the road, retracing the way we had come, a small cargo truck plowed directly into a hedge-covered wall in front of us, forcing us up a steep dirt offshoot while a bulldozer was roped up to free the vehicle and clear the way. 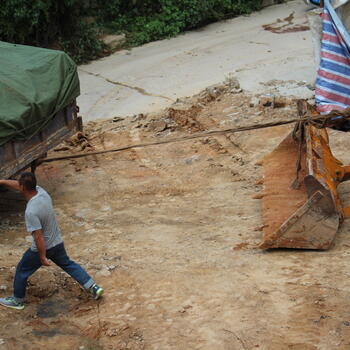 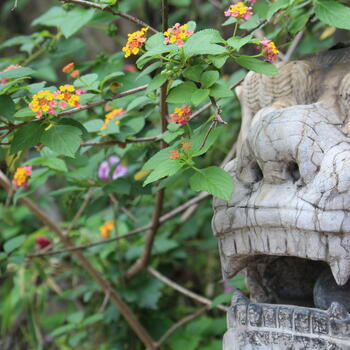 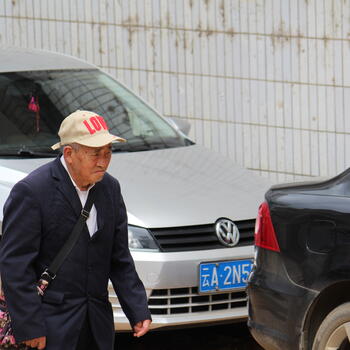 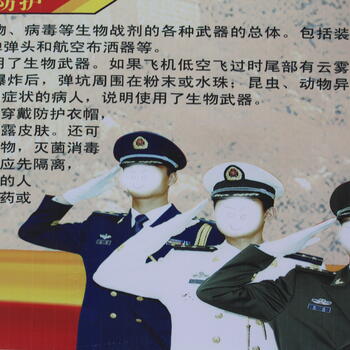 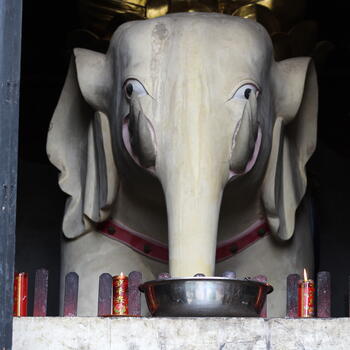 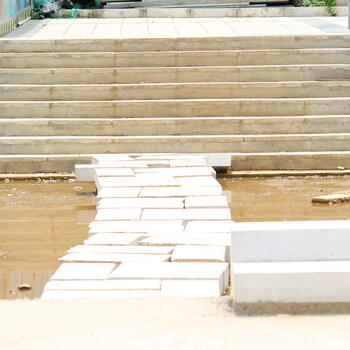 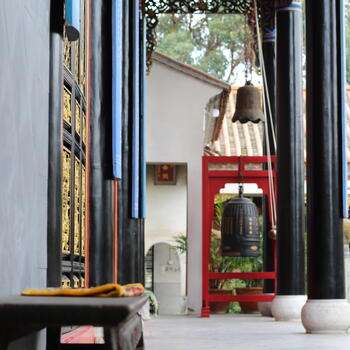 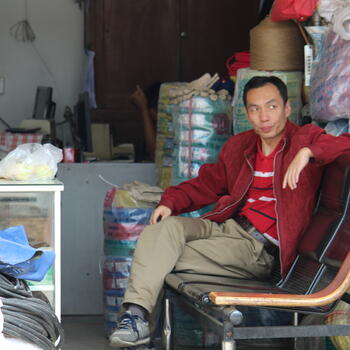 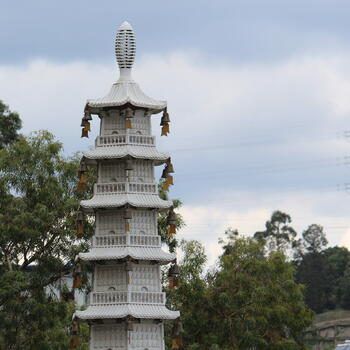 Less than three meters up our detour, slouching stubbornly among carelessly erected concrete and plaster apartments, was a dilapidated mud-brick structure. On its outer wall, a handwritten sign hinted at why no one had yet destroyed this anachronistic hut. It was the neglected sister of the grand Baozhu Temple, the characters on the wall spelling out "Majie Christian Church". We looked at each other and then back at the golden temple behind us. Partially obscured by the mud church, the history of a changing religious landscape lay plain for all to see.