Not everyone has time to explore random subway stops on the far outskirts of the city. But three unpaid GoKunming interns sure do. In this series, we traveled west along Kunming's Metro Line 3, visiting the areas surrounding four stops along the way to inform your possible future escapades.

Our goal was to better understand the who, what, and where of the new artery connecting Kunming's core to the far-flung regions that surround it. Check out our previous articles in this series, "Mystery at Mianshan" and "A landscape in flux at Chejiabi".

The third stop on our itinerary was Shizui (石咀), a lesser-known location nestled between Dayu Lu (大渔路) and Puping Cun (普坪村) on the western end of Line 3. The stop is just under ten kilometers from the city center, and used to be accessible via Kunming's last narrow gauge passenger train which closed due to rampant construction in late 2017.

The map at Shizui Station presented us with three promising attractions within close walking distance — a horse racing track, a forest, and something called Peacock Park, all represented on the map by vast expanses of green. Needless to say, we emerged from Exit H with relatively high expectations...straight onto a desolate, dust-covered construction site by the side of an unfinished highway.

Ahead in the distance, the Sleeping Beauty Hills (睡美人山) of Xishan (西山) helped us gain our bearings. A motley collection of houses lined the street to our right, and tucked behind those rose a sloping hillside shrouded in lush greenery which we hoped would lead us away from the gray cityscape and towards adventure.

Walking another 100 meters or so revealed an 'old' and most likely reconstructed traditional Chinese gate, which led to more residential buildings. An official-looking banner at the top of the entrance listed China's ubiquitous Twelve Core Socialist Values. However, what caught our attention was a much smaller, makeshift wooden sign balanced on one of the stone lions guarding the gate, its painted red letters directing us towards Miaoshan Temple (庙山寺).

None of us had heard of the place, but we figured it might provide our excursion with a good start. As we began our ascent up the wide, sloping path, the surroundings became progressively greener and the architecture more interesting. We were particularly drawn to some of the larger houses featuring cylindrical bay windows and clad in pastel-colored tiles — not the kind of designs we were used to seeing back in downtown Kunming. 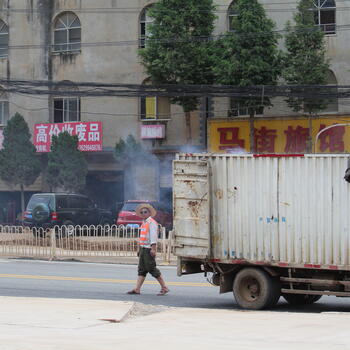 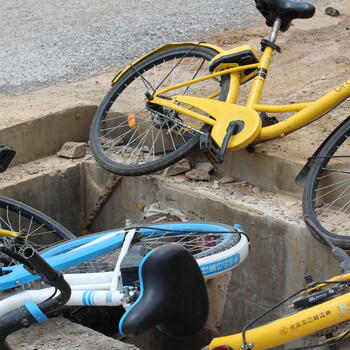 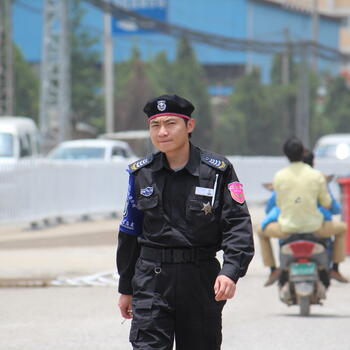 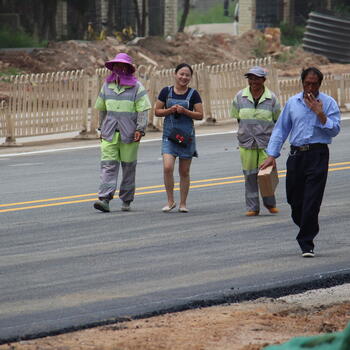 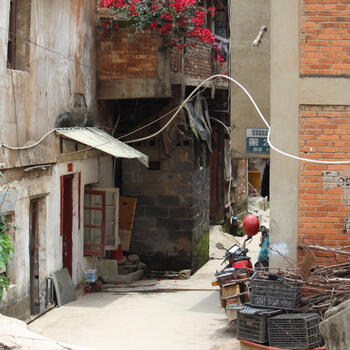 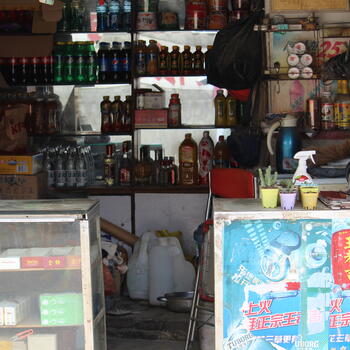 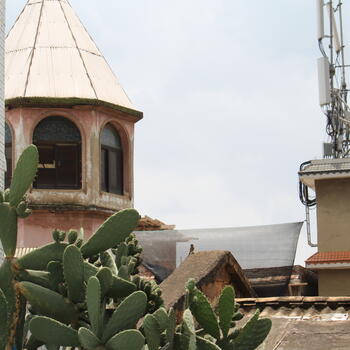 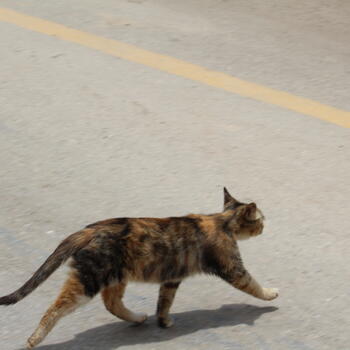 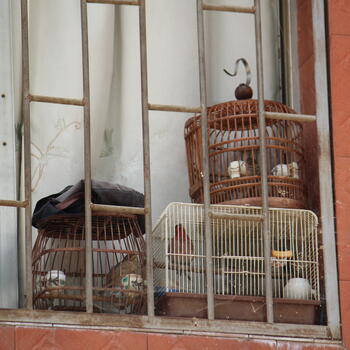 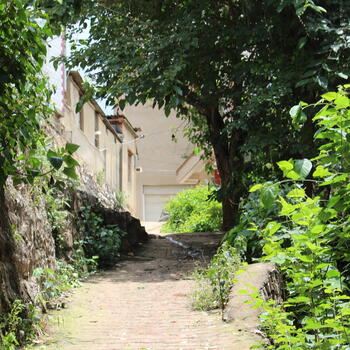 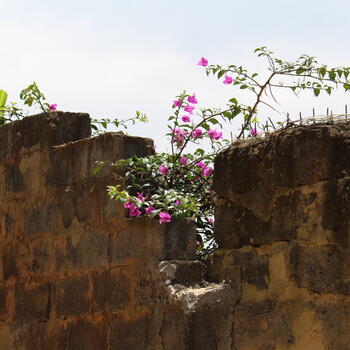 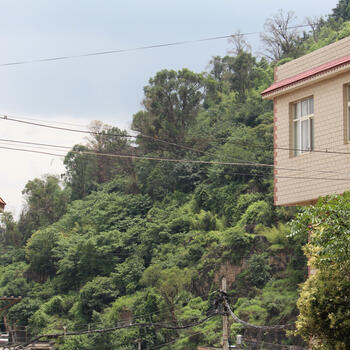 Eventually we came across a bend in the road with a clearer view of the hillside. At the top, part of the temple was visible — a small, rust-colored building on stilts, its name standing out in bright gold characters on an outward-facing wall. Dug into the hillside below and partly obscured by foliage was a curious stone structure reminiscent of an Aztec pyramid, although closer inspection hinted that it was most likely built to protect against erosion.

It appeared we still had a long way to go, so we continued along the path, attracting the odd glance from passers-by who were mildly surprised at the presence of three young foreigners in this out-of-the-way neighborhood. Soon enough we were stopped by a small group of men standing by the side of the road. They asked us if we'd gotten lost on the way to the significantly more popular tourist destination Xishan, an assumption which had already become a recurring theme of our Line 3 subway trip.

The building they'd emerged from, we learned, was the meeting place for the local neighborhood committee. At first the men insisted that there was nothing to see further up the hill, just a construction site. But when we specified that it was the temple we were interested in, one of them kindly offered to show us the way, although he did warn that we wouldn't be able to go inside since it was closed to the public that day.

Speaking mostly in Chinese with a few English words and phrases thrown in, our guide gave us an insight into life on the hillside. He explained that the crops we saw growing on either side of the path — mostly sweetcorn with a few other leafy vegetables — would be sold by residents to bring in some extra cash.

The factories that used to provide local jobs have all moved elsewhere, and many people living in the community now either run their own businesses or work in the city, with the new subway line making quite a difference to their commute. Our guide estimated that about half of the current residents are Han Chinese, with the other half belonging to the Yi ethnic group. 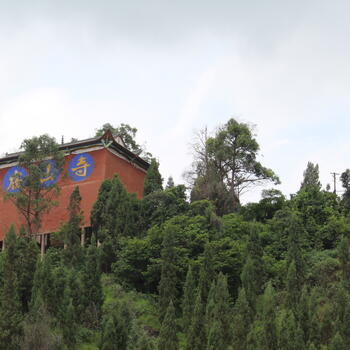 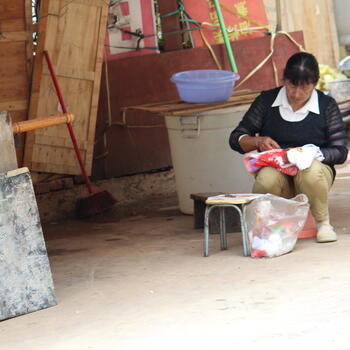 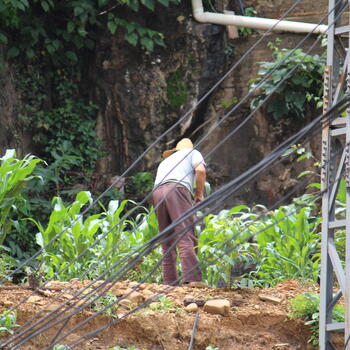 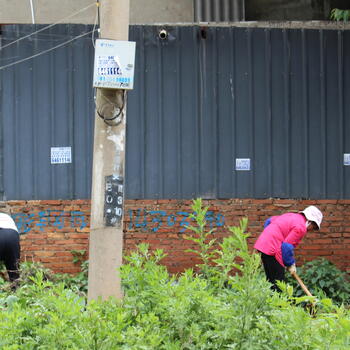 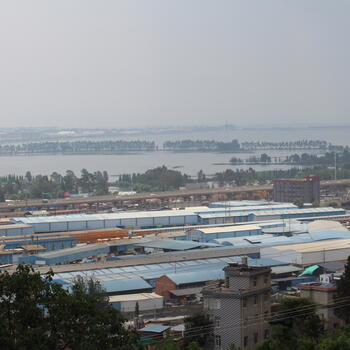 At a couple of points along the way, the trees parted to reveal pleasant views over Dianchi Lake and Xishan, and we stopped to take pictures before continuing. As we came closer to our destination, we turned onto the most interesting path we'd seen so far, with what looked like a half-finished red wall running along one side and an imposing gate at the end.

Beside the gate, and absurdly out of place among the nondescript foliage it presided over, stood an enormous, ancient-looking tree topped with a tangle of gnarled branches. Further up the hill, a striking statue of a concrete white horse stared down at us.

The tree, it turned out, was actually fake, as well as home to a tiny office, hollowed out to accommodate a young security guard who came out to greet us. At this point we were all thoroughly confused as to the nature of the place we'd stumbled upon — these were not the images 'Chinese temple' usually conjured to mind.

This however was not Miaoshan Temple, but instead an unrelated, now abandoned theme park which dominates the area around it. Complete with an impressive yet faded red-and-yellow statue of the Monkey King perched high on a wall, a deserted basketball court overgrown with weeds, and a stone bullfighting ring straight out of the movie Gladiator, the park was eerie to say the least. A comparison with Banksy's 'Bemusement Park', Dismaland, would have been a slight exaggeration, but it definitely occurred to us.

Once possibly a flourishing tourist destination, it attracted a variety of visitors, some looking for unusual photo opportunities, others betting large sums on the bullfighting matches which we were assured "were just two bulls fighting, and did not involve any humans". But now, the only entertainment was provided by a few stray chickens making their way across the ring. This is because last year the park was sold to a private construction company, whose offices now occupy a large area closed to the public. Soon enough most of this would probably be demolished, except perhaps for the Monkey King, who had become somewhat of an icon amongst locals and was deemed by our guide as "good for fengshui".

The grand congregation of traditional buildings behind the offices turned out to be an old restaurant, which had been lively and full of customers for twenty years before the park closed down. Perhaps the most poignant symbol of the park's demise was the deep Chinese-style pool drained of water, which once housed a picturesque fountain and is now surrounded by the hanging laundry of the company staff who have taken up residence nearby.

A little further on from the pool, we finally found our temple. Much older than the theme park, Miaoshan opens on the first and fifteenth days of every lunar month for local Buddhists to come and worship. Our view of the inside was restricted, but as temple interiors go, it was certainly attractive enough to warrant further exploration. Outside, what used to be a flower garden had now been claimed by crops, but clusters of colorful blossoms were still growing here and there, and overall the temple retained most of its traditional charm.

As can be expected from a summer afternoon in Kunming, it soon began to rain quite heavily, and we took this as our cue to head back downhill. Our guide kindly offered for us to wait out the rain in one of their meeting rooms, and we chatted with him and his colleague about the local area. One useful piece of information they provided was related to the Peacock Park we'd been looking for — apparently it had closed some time ago, and all the birds had found new homes. We never did find out about the racing track.

The rain cleared up, and we took a couple of photographs with the neighborhood committee members for their records before saying goodbye, careful not to step on any of the tiny baby frogs emerging in their hundreds from a large pond near the gate.

From there it was back to the main road, where in our absence construction workers had been busy painting fresh white lines to demarcate the lanes on either side. It seemed like a quick development, but then none of us were really sure how much time had passed in that ethereal park on the hill, which seemed so removed from both the hustle and bustle of city construction and the shiny, modern exterior of the Shizui Metro Station.