Not everyone has time to explore random subway stops on the far outskirts of the city. But three unpaid GoKunming interns sure do. In this series, we traveled west along Kunming's Metro Line 3, visiting the areas surrounding four stops along the way to inform your possible future escapades. Our goal was to better understand the who, what, and where of the new artery connecting Kunming's core to the far-flung regions that surround it.

The hot sun beat down on the winding pavement, sparing only those fortunate enough to have brought an umbrella. At our feet sat a vexing assortment of objects baking on the cracked asphalt — one deceased songbird, one dirty black sock, and one plain gray rock. The woebegone trio appear to tell a story, yet a simple cause-and-effect explanation of the events leading up to their abandonment evades the three of us as we stand over them.

The same question we ponder is exactly what the reader may now be wondering — how did we get here and, moreover, where is here? The answer to the latter of these inquiries is relatively straightforward, we are near the top of the hill at Mianshan Forest Park (眠山森林生态公园), located a couple hundred meters west of the Mianshan Station (眠山站) stop on Kunming's Metro Line 3.

The all-white, minimalist Mianshan stop is a carbon-copy of all the other stations on the line. As we sped westward, traveling underneath the city center towards the hinterland that is Mianshan, there was no visible indication that we were leaving the comforts of the city's Wuhua District (五华区). It came as a shock then, when we surfaced through Exit D into a world of stark contrasts — half green, half gray.

Once adjusted to the blinding sunlight, we were confronted by a black obelisk announcing where we had arrived, a final bastion of the polished design found in the station below. Across the street stood a busy bus depot whisking riders to points all across the city. In addition to the bus station, subway, and a road separating the two, a railroad cut a straight line through the scene. As might be expected in Yunnan, mostly pedestrians filled the tracks as they disappeared in both directions along the line.

View of bus depot and train tracks upon surfacing

Continuing past the tracks, we were greeted by a colorful advert inviting us to enjoy the "Jinbaoshan life", a reference to the lovely Jinbaoshan Park (金宝山公园) we had just stumbled upon. Upon entering, we first heard and then saw a smattering of small groups of elderly musicians — mostly playing erhu — scattered around the park. Some followed their sheet music on stands, while a nearby group worked with singers adding their voices in tandem with the braying of the erhu, their songs emanating from high in the throat in a style reminiscent of Chinese opera.

Wherever the park's seating allowed, older men and women not involved in the rehearsal process sat around small tables, each group at a different point in their card games. One woman wore her visor tilted downwards, ostensibly in an effort to bolster her bluffs. The remainder of the park featured idyllic views of couples and loners, old and young, all enjoying this island of greenery in a sea of dusty gray construction and dust.

Rejuvenated by our taste of the Jinbaoshan life, we braved the plumes of pulverized concrete filling the air and crossed the as yet un-delineated chunk of road packed with all species of vehicles crossing at all angles. Our goal was to reach a forested hill that Baidu Maps told us was Mianshan Forest Park. However, the neighboring construction had formed a deep chasm populated by slabs of concrete, tangles of iron wire, and formerly yellow ofo bikes fossilized in gray dust, thereby halting any attempts at ingress.

A monument of staggering proportions stood guard over the construction moat. Figures of laborers cut from stone, the geometric features of the giant men, women, and children stoic as they threshed grain, leveled roads, and struck iron. Below, etched into the massive plinth, a bas-relief commemorates another, earlier industrializing age, where leaders direct a cadre of mechanics supervising the operation of a Frankensteinian half-bulldozer, half-train. In front of them stand explorers surveying the land with sextants, as well as hunched men muscling forward a covered cart, all accompanied by bugle players providing fanfare for the backbreaking work.

We were finally able to tear our gazes from the mysterious nameless statue, and begin our walk along the crevasse, heading toward a bridge to the hill. Before entering the park, a bus charged over one of the metal plates placed to ensure a pothole-less ride. The deafening clang gave us pause as we ensured our pants remained dry. 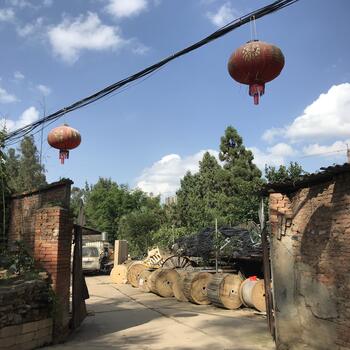 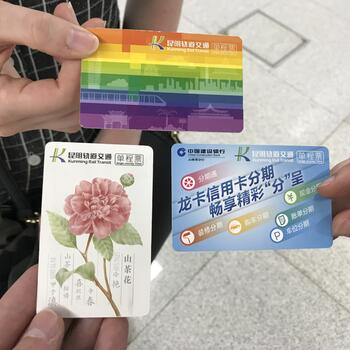 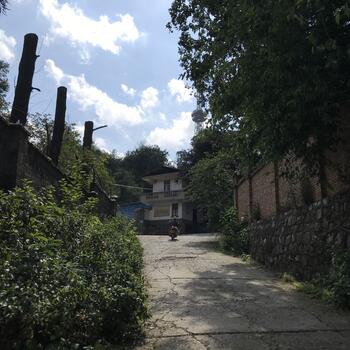 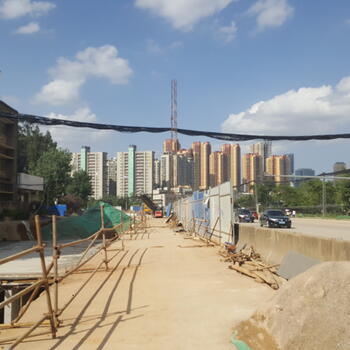 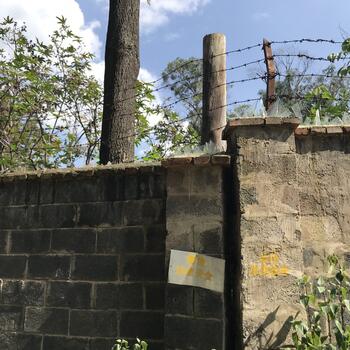 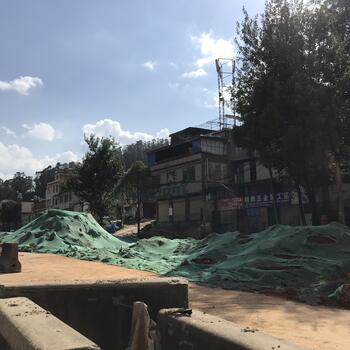 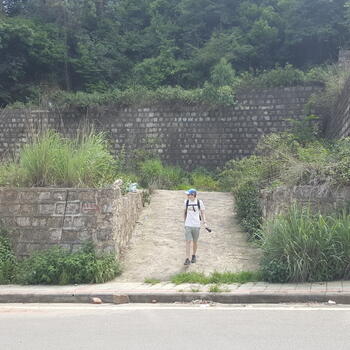 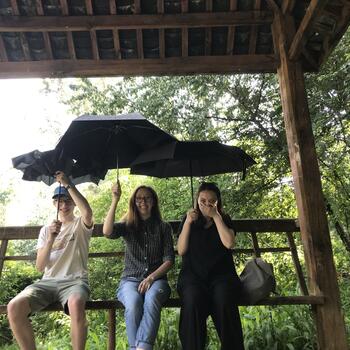 Traversing the moat, we once again left the gray and were re-enveloped by green. After climbing the main road for a few minutes, we peeled off onto a path into the woods. Once again, guards ensured the path's safety, yet here they were made not of stone but of wrinkles. Two old women pointed the best path up the mountain, emphasizing how ideal it was that there were so few hikers today. This, of course, only after describing the awards won by her dog of supposedly famous lineage, as well as how we could cook with dandelion leaves.

Elderly woman pointing out the usefulness of dandelion leaves for cooking

The forested hill itself was quite pleasant, and the sounds of construction were slowly replaced by the hum of cicadas. Yet Mianshan could only hide its mysteries for so long. We quickly found a discarded official fine for 2000 yuan, dated just one day previous, addressed to the construction site's owner for failing to provide adequate supervision. The fine warned of a 75 percent increase for the next infraction. And while the myriad official chops and stamps seemed to indicate the grave nature of the warning, the mud obscuring the crumpled page seemed to indicate the complaint had fallen on deaf ears.

One of us carefully bagged the specimen and we proceeded up the worn stone steps. Passing the obligatory gazebo to be found in any Chinese park, we encountered a dilapidated home nestled in the slope, presumably the residence of the forest's caretaker. Out of a fear of intruding, mixed with a fear of the house's guardian mutt, we moved on up the stairs, eventually meeting back up with the original road.

Trees! AND sun?! AND no crowds in sight?!

Up this avenue a bit stood an abandoned restaurant, a small chalk drawing of its floor plan decorating the outer wall. What was once an outdoor seating area had featured Harbin Beer branded tents and a central tree replete with hanging LEDs.

Once the patio for a world-class restaurant, we assume

Our ascent ended with a final suspiciously suspicious guard manning the gate of the Yunnan Provincial Broadcasting Academy (云南省广播电视学校). Barbed wire and glass shards topping the brick walls hinted that this guard would not let us pass. As we stood below the gate contemplating our next move, an unopened box of perfume caught our eyes. From there, our attention was quickly redirected to a flash of neon speeding up towards the gate. The Lady in Pink dismounted her scooter and was let into the complex.

But even before our encounter with the last of the wary watchman, we met the mountain's final mystery, which was also the scene set at this piece's opening — the bird, the sock and the rock. What it all meant and how it is all connected, we leave to the reader to decipher.

As we descended back toward the base of Mianshan and toward Metro Line 3, the sounds of honking gradually overpowering birdcalls, we turned back one last time to see a cat slink back into the brush, the dead bird hanging in its mouth, to which one of us cried, "Oh no, the evidence!"

Big thumbs up. This is a really useful article. The Metro has opened up new travel opportunities for us, and you are right, most of us don't have the time to randomly explore the city, but articles like this let us know about previously unknown (to the reader) places to visit.
Nice one!

Agreed. More articles like this please. I love "discovering" new areas of the city.