From June 22 to 30 in Seville, Spain, UNESCO's World Heritage Committee will review a list of hundreds of candidate sites proposed by countries around the world as part of the World Heritage Site selection process. In the end, only 20 or so sites will make the cut and be named World Heritage Sites, putting them firmly on global tourism's radar.

Each country submitting candidate sites must maintain a 'tentative' list of sites from which it can submit two candidates to the selection committee. This year, China's tentative list features 52 different sites, including three in Yunnan. China currently has 37 World Heritage Sites.

The Yunnan sites on China's tentative list include Dali Cangshan Mountain and Erhai Lake Scenic Spot, the Hani Terraces of Yuanyang and the lesser-known Chengjiang fossil lagerstätte at Maotian Mountain. While Dali, Yuanyang and Chengjiang are by no means unknown to travelers, being selected a World Heritage Site would bring new tourist revenue – and new developmental issues.

Yunnan is currently home to three World Heritage Sites: Old Town of Lijiang, Three Parallel Rivers of Yunnan Protected Areas and South China Karst. Here's a quick look at the sites that could be selected in June: 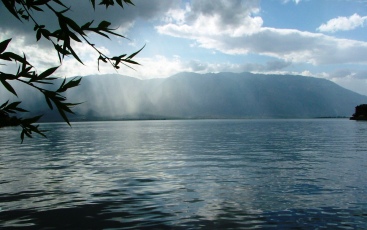 Dali
Set between the towering Cangshan Mountains and the expansive waters of Erhai Lake, Dali has been a mainstay on the China backpacker circuit for more than a decade.

The agricultural know-how of the ethnic Bai people native to the area made Dali an important rice production base in dynastic times. This wealth fuelled the rise of the Nanzhao Kingdom, which was centered in Dali and at its height stretched from northern Laos, Thailand and Myanmar up into Chengdu and the Sichuan Basin before incurring the wrath of the Tang Dynasty.

Today Dali's old town is the most popular destination for travelers, but small guesthouses have also been popping up around Erhai Lake at Xizhou and Shuanglang. At the end of this year a new train line will link Dali and Lijiang.

Should Dali become a World Heritage Site, it would likely face many of the same development-versus-preservation problems that Lijiang has dealt with. 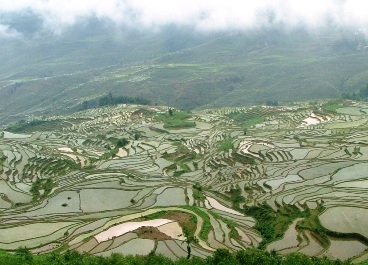 Yuanyang
Yuanyang and its rice terraces have long been an 'off the beaten track' option for travelers to Yunnan wishing for something different from the Dali-Lijiang-Tiger Leaping Gorge route. With just a fraction of Dali's tourism, Yuanyang offers a much more "local" experience for travelers – there is very little tourism infrastructure, roads around the terraces are often quite rough, and dining options are rather limited.

In terms of scenery, the more than 13,000 hectares of rice terraces around Yuanyang offer some of the most stunning natural images to be found in China, especially at the beginning of the year when the terraces are filled with water creating a striking mirror effect.

For relatively poor Yuanyang, World Heritage Site status would be tantamount to winning the lottery. The main question would be how much of the incoming tourist revenue would make its way into the pockets of locals.

Chengjiang fossil lagerstätte
The least-known of the three Yunnan sites on the tentative list, Chengjiang's Lagerstätte – a sedimentary deposit rich in fossils – is centered around Maotian Shan, located just north of the city of Chengjiang and picturesque Fuxian Lake, one of China's deepest and cleanest lakes.

While it is ignored by travel guidebooks, Chengjiang and its Lagerstätte is quite famous among paleontologists for the fossilized sea life it contains, collectively referred to as 'Chengjiang Fauna'. Chengjiang Fauna is considered one of the 'Three faunas of the evolution of early life forms' along with Burgess Shale Fauna in western Canada and the Ediacaran Fauna of South Australia.

The Chengjiang Lagerstätte recently made news around the world when Yunnan and UK scientists announced that they had found the earliest example of collective behavior there in the form of 525 million-year-old crustacean fossils linked together.

Already a popular weekend getaway for wealthy Kunmingers, Chengjiang would likely experience a rapid increase in international travelers as well as Chinese from other parts of the country were it to be named a heritage site.