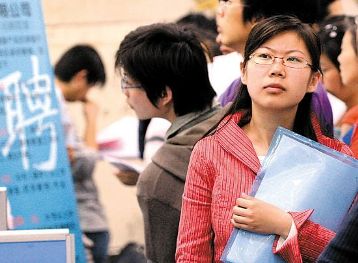 China's State Council announced yesterday that Chinese university graduates who relocate to western or central China will be eligible for a full refund of their tuition fees. The program was one of several measures aimed at improving employment prospects for university graduates.

With 6.1 million new graduates entering a bleak domestic job market and an official unemployment rate of 12 percent among recent graduates, the central government is hoping to move educated students into towns and villages in western and central China, where they would be entering smaller but less competitive labor pools.

According to labor experts at the China Academy of Social Sciences, many university graduates would rather work low-skilled jobs in China's wealthier coastal cities than take skilled positions in the country's interior cities.

A recent Guangzhou Daily report said that in the past half year more than 2,000 university graduates had applied to work as domestic helpers in the city of Guangzhou, some of them holding Master's degrees.

The 'Go West' refund for graduates was announced after a State Council meeting chaired by Premier Wen Jiabao, the second such meeting aimed at addressing domestic labor concerns. A meeting on December 10 focused on migrant workers.

Restrictions related to hukou were also removed for graduates who take jobs outside of their cities of official residence, not including the centrally administered municipalities of Shanghai, Beijing, Tianjin and Chongqing.

At first glance this doesn't sound such a bad idea. But, in my opinion, it's a 'BandAid' response.

Wen Jiabo isn't such a bad person, in fact, in a fully democratic country he would pass as an acceptable, hard-working, prime minister. Nevertheless, to relieve graduates of the responsibility of repaying their student loans — there are other ways to reduce that burden (assuming that it is a burden for all of them).

Anyone who is familiar with Southwest China (Yunnan?) knows that there aren't any positions available for Northeast China graduates to fill.

The communist ideology that permits government to make people relocate at will, goes against the statements of a 'harmonious' society, whether we are talking about students relocating to the countryside or, for other reasons, relocating to areas of unrest.

I only hope that those graduates apply for positions before making the journey in order, for one thing, that their diplomas, etc., are checked for credibility, because they will not arrive with smiles on their face, and workers with a grudging attitude could be a political nightmare.

The huge number of university graduates is related to the over abundance of universities which are being built, or extended, every day. There are too many examples of students with a 'fail' grade being awarded a degree. The money would be better spent building many more high schools in the rural areas where the students should remain until fully qualified for university entrance (should that be their intended destination).