Next week Kunming and the rest of China will take the week off for the National Day "Golden Week" holiday to celebrate the 59th anniversary of the founding of the People's Republic of China.

The week-long holiday is expected to provide a boost to the country's tourism industry, which is still recovering from the Olympics travel boom that never happened. Around 146 million people traveled during the National Day holiday last year, spending 64.2 billion yuan (US$9.3 billion).

Many of these people (and their money) will be travelling around northwest Yunnan during the next ten days, looking to experience stunning scenery, different cultures and some of the cleanest air in China. Tourism is one of the pillars of Yunnan's economy and is a major influence on the direction of the province's development.

GoKunming has been travelling around northwest Yunnan – albeit not as much as we'd like – since 1999. Last week, while on assignment updating a US-based China travel guidebook, we visited the popular destinations of Lijiang, Tiger Leaping Gorge and Dali. How have these places held up over the last few years? Here's what we found: 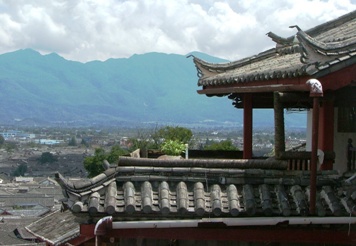 Lijiang (丽江)
Lijiang's old town of Dayan (大研), a UNESCO World Heritage site, is the most popular travel destination in Yunnan, with 5.31 million tourists passing through in 2007 and spending 5.8 billion yuan. Tourism has changed much of what was once a rustic town into a mix between a shopping mall and a theme park.

Lijiang's commercialization has emerged as a source of concern for UNESCO, but even if it were to be de-listed, it's difficult to imagine that tourism would drop off – especially domestic tourism.

Despite the seemingly innumerable guesthouses, restaurants, cafes and shops aimed exclusively at tourists, the old town's old buildings, stone bridges and fish-filled streams still make for a nice place to stroll around – especially the further one gets from the center of the old town.

That said, the old town feels like it is being maxed out in terms of how many visitors it can handle. In the last few years, the nearby old town of Shuhe (束河) has emerged as an alternative to Dayan. Much of Shuhe is occupied by new buildings intended to look old, but there is still an old town that feels like there are still local Naxi people living there.

Although considerably smaller than Dayan, Shuhe seems destined for a similar fate. Cafes, bars, guesthouses and shops aimed at the new Chinese middle class have sprung up throughout the old town. Only a small number of domestic tour groups come to Shuhe now, usually early in the morning. Expect that to change quickly. 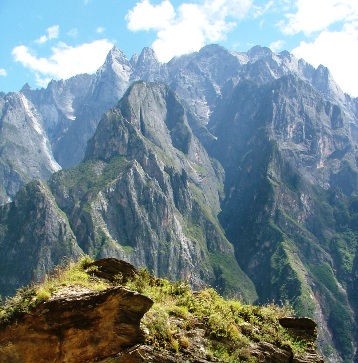 Tiger Leaping Gorge (虎跳峡)
Once slated for damming, Tiger Leaping Gorge was granted a reprieve at the end of last year when government officials scrapped plans to dam the gorge, through which the Jinsha River (金沙江) – which eventually becomes the Yangtze River – flows toward Shanghai and the Pacific Ocean.

A mountain trail – referred to as the 'high path' in contrast with the paved road once known as the 'low path' that passes through the gorge – enables visitors to hike the gorge between the towns of Qiaotou (桥头) and Daju (大具) over a total distance of roughly 40 kilometers. The hike is usually done in two days, with one night spent at one of the growing number of guesthouses on the trail.

We aimed to take the trail in one day, leaving Qiaotou at 9 am after arriving from Lijiang. Early morning clouds obscured the majestic peaks on either side of the gorge and the air was cool – ideal hiking weather.

Taking the trail from Qiaotou to Daju means getting most of the climbing out the way before settling into a generally easy but rather long hike. The trail is well-marked in general, but a map will generally help reduce wrong turns as well as being useful in gauging one's progress on the hike. Maps of the gorge are available at the Gorged Tiger Café in Qiaotou - located just past the booth where the local government collects a 50 yuan entrance fee.

There are a few small villages along the trail, with some homes converted into guesthouses with restaurants and travel provisions. When the sun is out it is intense, so sunblock and a couple of liters of water are recommended when packing. Foodwise, it is good to bring snacks – be they local walnuts or the candy bars available in Qiaotou and on the trail – but as guesthouses are frequent enough, there is little need to pack a full meal.

Around ninety minutes into the hike, one hits the trail's toughest stretch - a steep 600-meter switchback ascent known as the 24 bends. Even experienced hikers will likely need to take a break or two at some point on this ascent, which tops out at 2,400 meters. After this point the trail becomes essentially a contour path before merging with the road below at Walnut Garden some 20-plus kilometers into the hike.

Shortly after completing the 24 bends the sun came out in full force. Determined to make it to Daju before the sun went down, we ignored the sun and pushed on until hunger forced us to stop for lunch around 2 pm.

After refuelling, we completed the high path and joined up with the low road, taking it several kilometres before discovering that the old ferry which is the only way to cross the Jinsha into Daju finished at 5 pm, ending our hike just short of our goal. Maybe next time. Thanks to the gorge not being dammed and filled, there can be a next time. 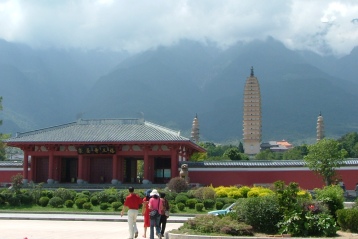 Dali (大理)
The old town of Dali has been one of the most laid-back towns on the Yunnan travel circuit and remains so, but there is little doubt that the city has changed drastically in recent years.

In 1999, Dali was an established travel destination for domestic tourists as well as foreign backpackers. Most of the guesthouses, cafes and restaurants targeting travelers were located on the upper section of Huguo Lu, which was already primarily known by its nickname of Yangren Jie or 'Foreigner Street'.

Today Huguo Lu seems to only attract domestic tour groups and foreigners with outdated travel guides. One street over, Renmin Lu is now brimming with cafes, restaurants and guesthouses – seemingly all the way down to Erhai Lake. In 2000, the street was almost entirely 'local'.

Since '99, some of Dali's top sightseeing attractions have been repackaged in ways to maximize ticket revenue. A massive Chan (Zen) Buddhist temple has been built behind the Three Pagodas, helping justify the hefty 121-yuan ticket to enter the Three Pagodas site.

The Cangshan Mountains (苍山) are still a short walk to Dali's west, but now it costs 30 yuan to even set foot on the mountains – there is an army of old men scattered throughout the mountain area to make sure that tickets have been paid.

Despite recent commercialization, Dali's chilled-out vibe remains, and as more people from around China and the world discover it, more people are looking to Dali as a place to live or have a second home. Not surprisingly, Dali property prices have been some of the fastest-growing in China.

All in all, it appears the money will keep rolling into Dali – the biggest investment at the moment being a 10 billion yuan project by megadeveloper Shui On Land.

Despite all the change that has taken place in Dali, there is something about its idyllic surroundings, slow pace of life and the feeling of being far from the rest of the world that suggests the town will remain a good place to take it slow for years to come.