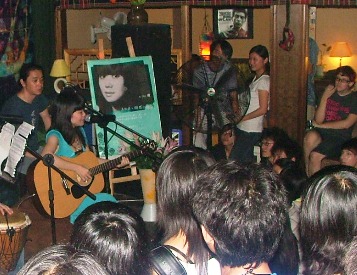 Tuesday night at Halfway House both floors were packed with people who had come to see Wu Hongfei (吴虹飞) play an unplugged set in support of her new album Rouge (胭脂). Accompanied by local musicians Sam Debell, Zhang Shuang and Ma Li, the diminutive Wu – also known by the nickname A Fei – gave the large crowd a personal and intimate performance that by all appearances was very well-received.

A few hours before the show, Wu sat down with GoKunming to talk about her new album, life in modern China, and her personal and professional dreams. Despite being one of the most famous female rock musicians in China – primarily due to being lead singer of the popular band Happy Avenue – Wu was very approachable and extremely modest. Here is what she had to say:

GoKunming: You're here in Kunming and then on to Lijiang to promote your new album, which is a very personal work... where did you find the inspiration for the album's songs?

Wu Hongfei: My inspiration for Rouge comes from my life experiences, my thoughts, love secrets – even being a nanfangren [native of southern China]. In China, especially Beijing, much of the focus is on the north of the country. I felt the need to say something about south China on the album.

GK: How do you find life in Beijing, being a southern girl from a small town in Guangxi?

Wu I've been in Beijing for more than ten years now... I feel it is kind of like a lonely island – interpersonal relationships tend to be much colder than what I grew up with. I'm a southerner. I like being around lots of friends and enjoying myself.

GK: You are a solo musician and also play with a band, you are also a magazine journalist and an author – what do you think suits you most out of all of this?

Wu I prefer to be with the band... they're all just adorable people and loads of fun to be around. When I'm around them I find that my emotions intensify.

GK: You graduated from Tsinghua University – arguably China's most prestigious science institution – with a degree in environmental engineering. How is it that you ended up reorienting yourself towards writing and the arts?

Wu: The Chinese education system is pretty rough. I got nothing from school. I had great grades, but after I graduated, I discovered that I couldn't do anything. That I hadn't learned anything. I decided I had to learn from life.

GK: What are your feelings about China today?

Wu: China's reality is constantly changing – sometimes it's ridiculous and it is often strange, plus the people can be very complex.

GK: With regards to your music, do you have any ambitions to play outside of China?

Wu: I'd love to perform in New York with Happy Avenue. When we performed our first gig in Hong Kong the band really enjoyed it. I've been to New York before just to have fun, I didn't know anybody there before I went and ended up having a blast.

GK: You've been playing recently with a group of Kunming-based musicians that you only met days ago, how is that going? How did you find them?

Wu: It's been a joy practicing with Ma Li, Zhang Shuang and Sam, they're all really friendly and easy to be around. I ended up being introduced to them through some friends of mine in Beijing, now I have more friends here in Kunming next time I come back.

GK: As a writer who has published seven books, what kind of process do you go through when you write a book?

Wu: From a very young age I didn't live with my parents. I used to send them long letters often, many of which were filled with stories from my life at the time. Also, I'm very introverted. This is probably why writing is a very natural process for me. For me, writing is like breathing, although I always want to write better.

GK: What are your personal or professional goals for the next year or so?

Wu: Wow, I have a lot of those! Hmmm... I want to make my third album, I'd like to find a boyfriend and have a baby, and I definitely want to come to Yunnan more often – with the band.