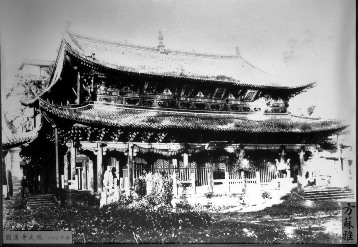 Nestled between the Kunming Zoo and the chaotic traffic of Yuantong Jie, Yuantong Temple (圆通寺) is an oasis of tranquility and reflection in downtown Kunming. Built during the Nanzhao Dynasty in the early 14th Century, this Chan Buddhist (aka Zen or 禅) temple is listed as one of the key Buddhist temples in China.

At the beginning of the Twentieth Century, Yuantong Temple temporarily served a purpose other than providing a place of worship. During the time in which French consul Auguste François was based in Kunming working on the railway from Vietnam to Kunming, his engineer on the project lived in the temple's main building, Yuantong Treasure Hall (圆通宝殿).

During this time, there were few foreigners living in Kunming and few places in which Westerners wanted to live – hence the engineer's selection of the building as his residence. Not surprisingly, his selection of a major Buddhist temple as his home led to some clashes with local residents who wished to worship, burn incense and present offerings to Buddha there.

After several months, François' engineer had had enough of altercations with local Buddhists and he moved out of Yuantong Temple, but not before François captured the building on film in 1902.

The image below is a photograph taken in June, 2008 by GoKunming – 106 years after François. 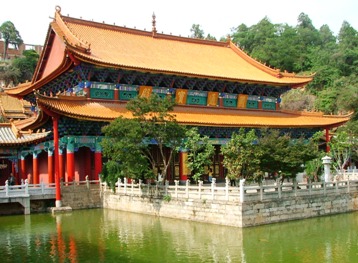 Today Yuantong Temple is a protected temple and is most definitely not available for rent. You can stroll around the temple compound and take in the pleasant architecture and also the fish- and turtle-filled moat for four yuan. Yuantong Temple is located at 30 Yuantong Jie.

Before I have left my lovely hometown,Kunming for about 3 years,I find it to be the most beautiful city in China.