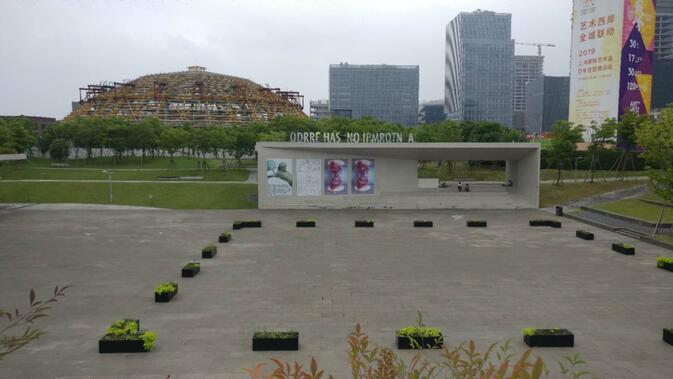 Shanghai (上海) is an illustrious Chinese metropolis with a European flair — sometimes nicknamed 'the Paris of the East'. After rapidly developing from a relatively low ranking Chinese trading port to a global center of international trade in the 19th century, Shanghai today is a global hub for finance, innovation and transportation. During this year's Dragon Boat Festival I ventured north, for a brief first visit to the city also known as Modu (魔都), the "Magical City" on the Huangpu River.

On the to-do list for this lightning visit: Exploring modern art museums, Art Deco and Shikumen or "Stone Gate" architecture, the newly developed West Bund — formerly the site of the 2010 World Expo Fair — and generally enjoying the big city vibes and skyline, on a budget. In preparation, I read Foreign Devils in the Flowery Kingdom, the autobiography of Carl Crow, who was a Shanghai-based American media mogul in the beginning of the 20th century. I'm staying with my friend David Lingerak, a video producer. I have included his 360-degree pictures in the article — they give a very good impression of the places we visited. They work best when you open them in a browser.

Arriving on an early morning flight from the City of Eternal Spring, we are in for a shock — Shanghai in June is enveloped in oppressive humidity. For the next three days, the weather is overcast and hot, so we are pretty much continuously either drenched in sweat or drenched by the occasional spectacular downpour. This doesn't stop us from getting around mostly on foot or by share-bike, in between the downpours. Both are good low-budget ways of getting a feel for the layout, size and atmosphere of the city centre. The excellent subway system is also a cheap way of getting around. As a bonus, it offers an air-conditioned escape from the muggy heat and humidity aboveground. Another fun and cheap transportation option is taking a ferry across the Huangpu River. 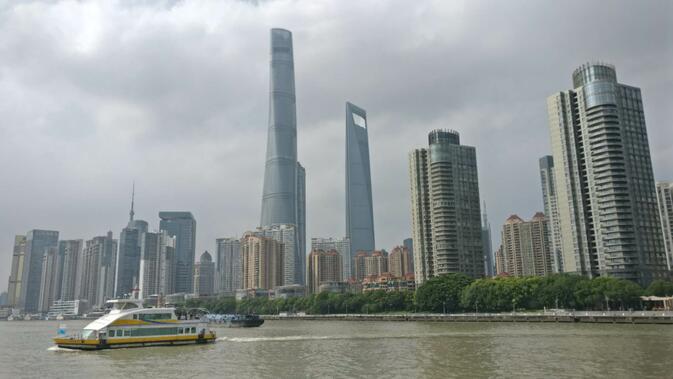 Situated on the left bank of the Huangpu River, the central French Concession area is remarkably leafy and laid-back for a city of its size — a population of 24.28 million makes it the most populous urban area in China and the second-most populous city in the world. Interestingly enough, the Chinese didn't think Shanghai was all that great in the 19th century — situated on a mosquito-infested mud flat plain that flooded on a regular basis, on an artificial and unimportant river that was too shallow to navigate well — which is why they gave it to the foreigners to create their settlement.

Over the next few days, we keep coming back here — for coffee in one of the many laid-back cafes, a browse through the hip vintage clothes shops and to just enjoy the lush greenery of the streets, gardens and parks and the Art Deco architecture by L.E. Hudec. 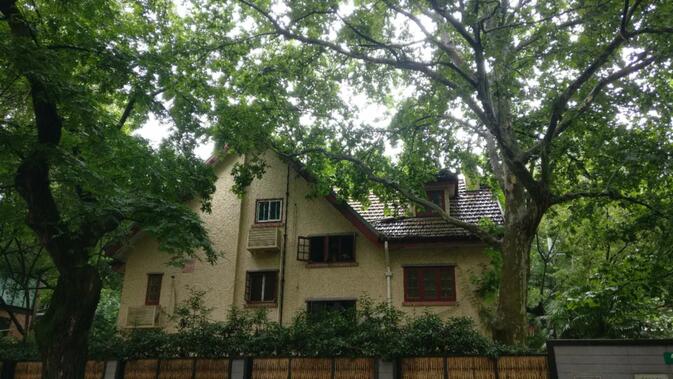 By bicycle, we explore almost the full length of the Bund. The West Bund is a newly redeveloped river bank area where former industrial buildings have been transformed into cultural spaces and new museums have been built. The recently opened West Bund Museum is a dependence of the Centre Pompidou in Paris. It has an excellent exhibition on show, with highlights of their modern art collection. From there, we cycle along the bike path that follows the Huangpu. My friend tells me that it has not been long since the work has finished and that it is now possible to cycle or run for kilometers, uninterrupted by traffic or building work.

We cycle by what was the terrain of the World Expo in 2010. This is one of the highlights of my Shanghai visit. The Dutch Pavillion at the Shanghai 2010 World Expo was a fun collection of cartoonesque Dutch canal houses called Happy Street, by artist John Körmeling. 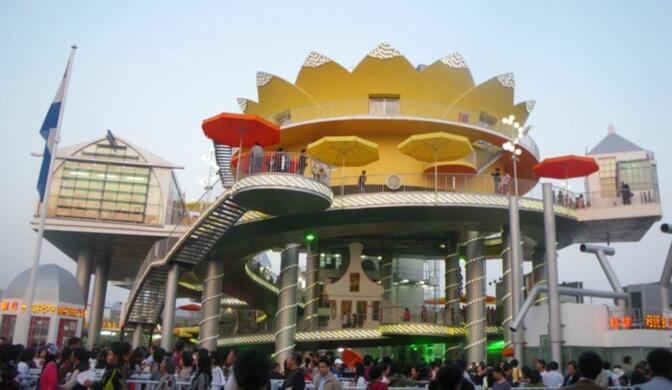 Dutch world expo pavilions were the topic of my thesis for my architectural history degree, so to finally see some remnants of the site that I only knew from research was quite exciting. Most of the pavillions have since been demolished, except for the striking Chinese Pavillion, designed by professor He Jintang. 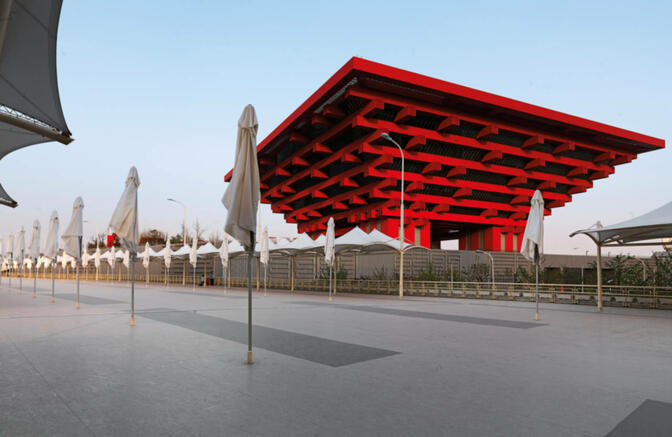 The 30-metre high roof is constructed with 56 wooden brackets which represent the 56 ethnic minorities in China. The building is a modern interpretation of the traditional Chinese dougong structure which has been in use for more than 2000 years.

We meander through a few of the remaining Shikumen neighborhoods, witnessing a building style that is unique to Shanghai. The large townhouses are built on narrow lanes, with much of the everyday life that is going on in the front part of the buildings visible from the streets. They are a mix of early 20th century Chinese and Western building practices and the "Stone Gate" refers to the gate at the entrance of each alley, with a decorated arch that indicated the social status of the houses it guarded. 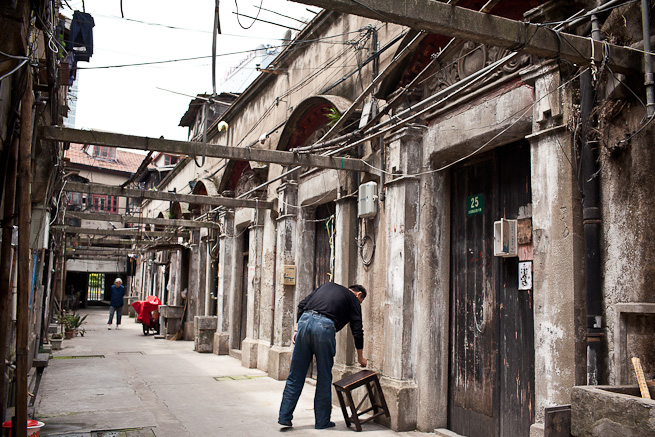 After snapping some pictures of the Pudong skyline — the quintessential example of Shanghai's breakneck architectural development — we hop on a ferry across the river and continue our bike ride on a new bike lane that pleasantly meanders through parkland bordering the river. The Pudong area was mostly farmland until 1990, when it gained the status of Special Economic Zone and money started pouring in and skyscrapers started shooting up. We see a cormorant catching a fish, a strangely out-of-place scene as nature doesn't feature big in this city. 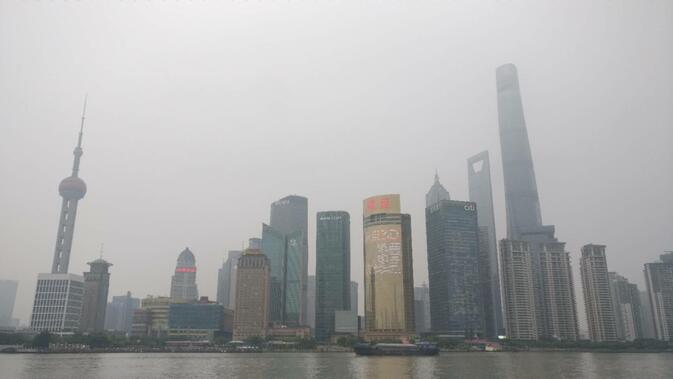 One more ferry-hop and we are back on the Shanghai centre side, where we head for 1933. This huge slaughterhouse was built in (you guessed it) 1933 and recently renovated. Despite its bloody past, it's a wonderful place to visit today. It has a striking maze-like layout that is crowded with selfie-taking Chinese youngsters. David created a 360-degree panorama of 1933, capturing the strange stairs and cattle walkways over several floors. 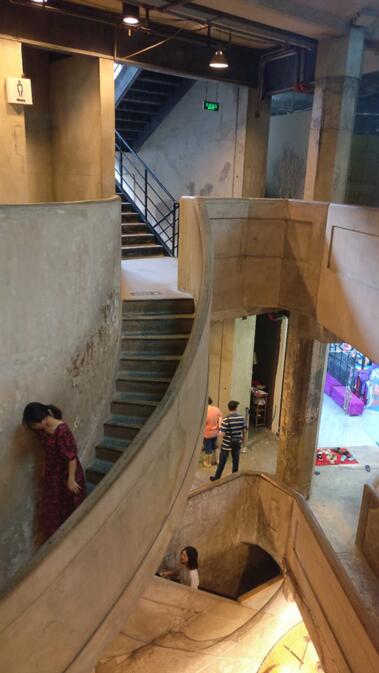 Throughout the day we find cheap-ish meals in restaurants in shopping malls, but Shanghai food and drink can get seriously pricey and there are relatively few cheap and cheerful Chinese eateries. We finish our day with a (not very low-budget) round of drinks with friends at one of the cafe's in the sunken courtyard of Found 158, another prime example of a very recently redeveloped area.

Apart from modern art spaces, there are plenty of quirky museums to visit. There is, for instance, the typewriter museum. We visit a small but nice architecture display in the French Concession. 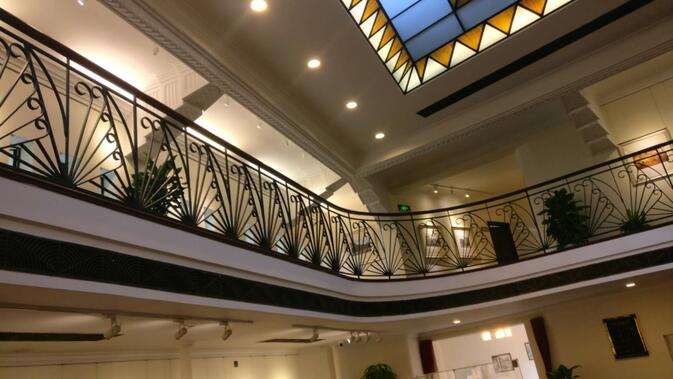 On my last day in Shanghai we pay a visit to the Propaganda Poster Museum, which holds an impressive collection of original Chinese propaganda posters, hung around the few rooms in chronological order. Many of them are accompanied by small handwritten explanations in Chinese, French and English, explaining their meaning and their place in Chinese history. It's a fascinating and beautiful collection, all the more interesting because it is displayed in a very unassuming and somewhat cramped office space. 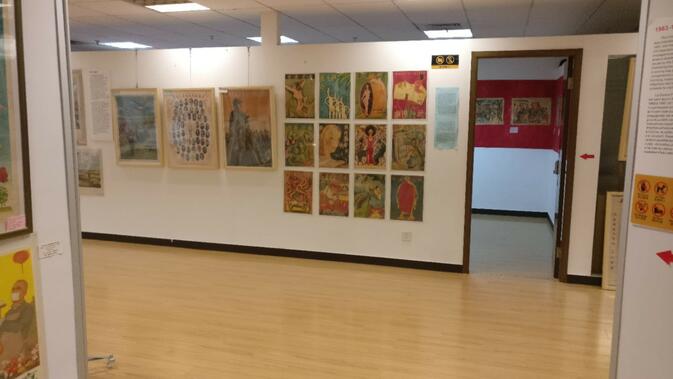 The museum shop is great for souvenir shopping and I leave with a book containing all the prints.

With the current impossibility of international travel, it was very nice to visit a city that felt and looked European in some ways. Shanghai is several leaps ahead of Kunming in many aspects, positive as well as negative — the exorbitant rental prices of tiny apartments and the high cost of living in general, but also in public transport, recycling and the ban on smoking in cafes and restaurants. I will definitely come back for more visits, but I'm not sure if I would want to live there. Even if Shanghai is in the top ten of liveable cities in China, just like Kunming.

There are several daily three-hour direct flights from Kunming to one of the two airports serving Shanghai with domestic flights — Pudong Airport is within easy reach of the city centre by either Maglev (40 yuan) or subway (7 yuan) and Hongqiao Airport is even closer — by subway it takes only about 30 minutes (4 yuan). Taking the fast train is also an option, it takes about 12 hours.

I lived in Shanghai for a number of years, it is pretty humid all year round. The summer is hot and wet, and yes once you walk out of the door in the morning you know you will be drenched in sweat all day. The winter is cold and damp, with the damp getting into everything, bedding, clothes, even your bones.

Pay in Shanghai is much higher, but you need the extra money just for apartment rents and higher prices for entertainment.
Shanghai is a good place for work, entertainment, shopping, and transportation, but it really is living in the rat race. Shanghai offers a higher standard of living, Kunming by comparison is more relaxed and offers a better quality of life. IMHO.

It is also nice to see that they are making some effort to encourage cycling. They were banning bikes from some areas of the city when I lived there.