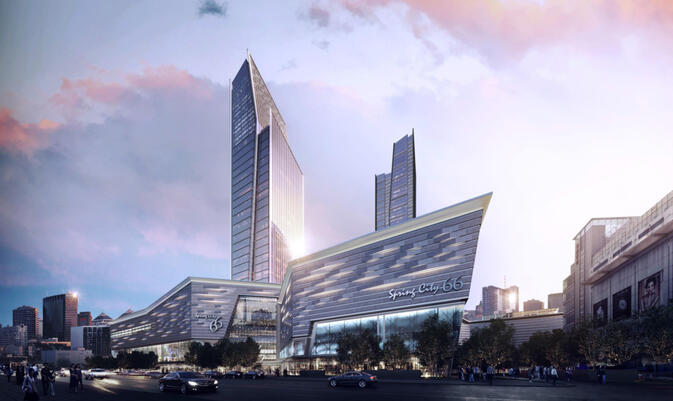 The soft-opening ceremony marked the end of eight years of negotiation, design and construction. Creation of the Spring City 66 was originally proposed in 2011, with government approval of architectural renderings approved two years later. Ground broke on the project later that same year, and the skyscraper portion of the complex topped out in late 2018.

Speaking of the building at the August 23 event, Hang Lung's Chief Executive Officer, Weber Lo, explained the concept behind the mega-structure, saying:

Much of this space — more than one-third of the total — will be devoted to a sprawling, multi-level shopping mall filled in with the hundreds of businesses spoken of by Lo. The remaining areas, especially those located high up in the 66-story building, will be devoted to offices and serviced apartments.

The new complex in Kunming represents Hang Lung's tenth '66'-themed development in mainland China, with the others mostly concentrated in megacities along the country's east coast. While currently the champion of Kunming skyscrapers in terms of height, the Spring City 66's reign will be short. The under-construction Dongfeng Plaza Landmark Tower will overtake Hang Lung's creation sometime in 2022.

I think it might be better to put resources into poverty relief, education, health, etc., rather than elaborate conveniences for the already well-off.

I agree. There was nothing wrong with how it was before. What a waste of money. Like if Kunming doesn't have enpugh empty malls to shop in.

Maybe a place to go for a capuccino. :)

At a venue such as this, a mere cappucino will not do. A ristretto double-shot pumpkin spice organic skim frappucino is the bare minimum.

I would like to add there is a Michelin one star Cantonese restaurant in there. Same floor as Café de Paris, where you may drink that high-demanding frappuicino.

If and when this hypermarket chain opens in Kunming, the usual complainers would instead be raving in joy, and overlooking how such "soulless" investment resources and land allocation would be better served alleviating poverty.

Sometimes it comes down to whether new projects tailor or serve one's own needs.

Terrifying. Two years to get architectural drawings approved and 8 years from inception to project completion. Absolutely terrifying process. I wonder why HangLung was so consistently motivated to develop this project in Kunming?

There' may be the 'usual complainers'. There's also know-nothing mindless boosterism.

None of this in Lahore, Yogyakarta, Athens and Kolkata. All cultural capitals. Other examples welcomed. Mandalay? Yea. More?

@Ishmael and @Liumingke1234
Not to sound like a capitalist pig here, but this is not a government project. It's a private sector project by a Hong Kong-based property developer. Property developers are in the business of developing property, not funding poverty relief, education, health, etc.

While I don't disagree with you that Kunming has a glut of of unnecessary luxury shopping malls, the urban planner in me has to defend this project purely based on its location. This project is located right on top of Kunming's first and so-far only subway transfer station, at the confluence of the main North-South and East-West trunk line subways. A location like this makes total sense for a big, magnet multi-use project like this. People will be able to come here by subway, reducing the amount of car traffic downtown. This is much better planning than the more suburban shopping malls like those around Dianchi which are more auto-oriented than transit-oriented.

My point was that the structure themselves are so massive that there are wasted. There will be many empty offices and apartments. I live in the North and rarely go to Dong Feng Square anymore. Here in the north they are building a mall too. They have a Walmart, train station, McD's and many dress shops that have little to no traffic. When the mall opens this or next year it will be empty like most mall I've been to.

Geogramatt: I understand about the private sector and am pointing out that it indeed is not in the business of funding poverty relief, education, health, etc., but in serving its own interests and those of its relatively well-off clientele instead. The government allows this kind of property development to go on.

Shopping malls is the selling of goods, which creates jobs. The complex contains businesses ie creating jobs. These things are meant to stimulate the economy. And how do you propose to fund poverty exactly?

Then we have the Starbucks bashing crowd. Starbucks helps kids get jobs to pay their way through school, over-priced lattes notwithstanding.

And when they get through school they get what? A job in Starbucks? Is that the best the world can offer? And ugly concrete mazes selling tat made by Bangladeshi workers earning a pittance while billionaires cavort on their yachts after monetising others' inventions. Only complete cynics think the world can't to do better.

No cloudy, Starbucks aren't enough to give rural children the opportunities for a brighter future.

Building more schools and hiring a legion of well-trained teachers to foster a better education system may help.

The government needs to allocate more funds to building and revamping these countryside schools.

And where may local governments get that money outside Beijing?

This is where the corporate buzzwords you so despise come into play. Accountability, transparency, and oversight. Without which, corrupt-prone local officials may end up pocketing the hongbaos from developers to be transferred to their private Swiss bank accounts used by their own privileged children studying aboard.

With accountability, transparency, and oversight... hundreds of billions in funds are more than enough to provide poverty stricken children the first steps in the right path to a brighter future.

The Kunming local government indeed sold off prime locations in the Kunming city centre. This money was used to build new facilities in Chenggong the planned new centre of town.
The property developers where quite willing to buy these old locations because they realised that he shopping public would not go to Chenggong. What changed however is that China does not shop any longer in shopping centres but shops online.
The result of this is a surplus of shopping centres that are only partly finished or never completed (Of which there are several in my neighbourhood). Even in those that are finished sometimes the facilities like elevators and moving stairs, don't work anymore, probably because there is not enough money to pay for them.
Spring city 66 might turn out to be different because it is an office complex as well and at a junction of metro lines.

I can see the hideous shopping malls but where are the rural schools?

Well if you have been outside Kunming in recent years then you know they build new schools everywhere, many with dormitories.
Problem is not the physical infrastructure but the lack of staff to work in these places.

> And when they get through school they get what? A job in Starbucks?

Actually I help out at a rural school and bought them a piglet so the kids could occasionally eat meat. Difficult to attract teachers to backwaters but see Ishmael's post. Oh and by the way the buildings were not new and shiny.

Thank you with sincerity for doing your part in being their beacon of light now, and glimmer of hope for their future.

Touching base on the challenges of recruiting credentialed teachers to rural outskirts.

Though some may scoff at technology and change from traditional pedagogy/curriculum. Perhaps the anecdote in that domain lies somewhere in the advent synergy of 5G, A.I, and satellite internet....

to bring real-time machine learning based academia to backwater classrooms in virtual form. Reaching not just hundreds of millions of rural children in China. But bridging education access gap to those less fortunate families in the Middle East, India/Pakistan, South East Asia, Africa, and the rest of the world.

Perhaps a ground-up, global multinational cooperation effort with coalition of governments' subsidies to incentivize private innovations need to occur to make this a reality.

so you think the shit will hit the fan? a secret peter99 admirer? care to venture a date? have you started transferring your money out?

@dolphin
If you had done your homework you could have learned that Matt left some years ago.
His contributions to this forum where always knowledgeable and to the point. Many based on his extensive travelling around Yunnan by bike and public transport. (Strangely we never met at that time because I travelled a lot through Yunnan as well at the time).

Also I don't know him personally; I really doubt that he is a fan of P99. Matt is a scientist and thus will have little time for Alex Jones & David Wozney.
I don't know about his personal finances but he probably had little money to transfer out of China when he left since he spend it all on bus tickets ;-)

Demographic, structural, developmental, and geopolitical are big words. I don't even know what that means.

Don't worry dolphin, when you grow up somebody will explain them to you. Meanwhile stick to your Disney magazines.

Stop it you two

JanJal, happy to report a yummy doughnut store is opening on the 6th floor here. I believe the same floor as the one star Michelin restaurant.

March 9, 2021 "It is worn and being used for several years. The headlight and horn don't work. Except for these problems, most parts function fine. Brake and throttl …"
Jobs Offered Andy Young