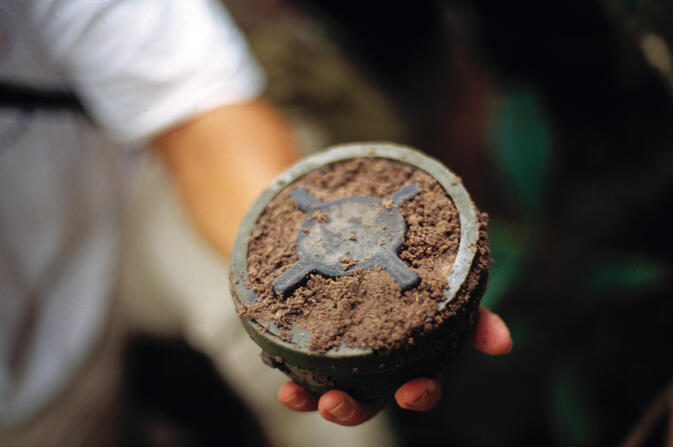 A man who perhaps has no business messing with explosives has done just that in southwestern Yunnan, for more than two decades. Wang Kaixue (王开学) is a self-taught landmine sweeper who has identified, dug up and defused thousands of mines. His "hobby", as he calls it, has never led to any serious injuries or mishaps.

Wang educated himself on the finer aspects of mine clearance "in the 1990s". His efforts center around his tiny hometown, Balihe Village (八里河村) in southeast Yunnan's Wenshan Prefecture. The rural settlement sits 20 kilometers away from the Vietnamese border in an area of Malipo County (麻栗坡县) known for its steep Karst mountains and often dense tropical forests.

The region was the scene of intense fighting during the month-long Sino-Vietnamese War in 1979. Soldiers from the opposing armies laid tens of thousands of landmines along their disputed border during that short window of time, a legacy both countries still deal with today.

After finding and disposing of a few landmines out of morbid fascination, Wang acquired a book explaining how to recognize and assemble the explosive devices. Apocryphal accounts say Wang unearthed the 1970s-era field manual while searching for mines. Regardless of the book's provenance, it was around this time Wang got down to serious business.

Working backward, he reportedly learned to disarm the mines he found without any formal training beyond the manual. He has worked methodically and relentlessly since — unpaid and unsupervised — eight hours a day, every day. Decidedly low tech, Wang depends only on his eyes to find the explosives, and then uses a shovel, sickle and his hands to remove them from the ground. He also eschews any protective gear and, perhaps wisely, works alone.

Once he unearths a mine, Wang removes the outer cover and scrapes away the residual explosive charge, which is typically TNT. Using this method, he has cleared 10,000 mines over the past 20 years. Chinese press reports have dubbed Wang the country's "de-mining king", a mantle he hopes to maintain until he retires in seven years at the age of 55.

Governments declare war, should clean up the mess they make.