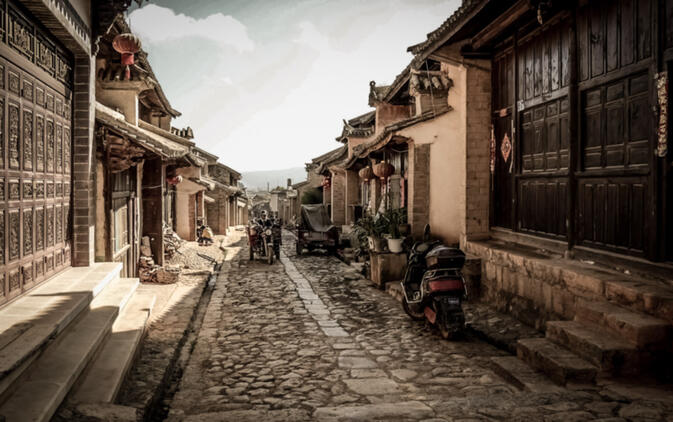 The initial sensation one has when arriving in Yunnanyi (云南驿) is that of dryness. It feels significantly more arid than Dali, which is nearly two hours away to the northwest by bus. Next might come a feeling of deja-vu. The main dusty road, lined with modest concrete houses — but also some adobe ones — did not look particularly different from many rural Yunnan roads I'd seen that tend to provide conduits for bulky construction vehicles. Looking back, I can see why this village — plenty lonesome as it was — does not appear in guide books.

I was nonetheless drawn to the village after reading about its reputed 2,000-year history online, an account which also explained the town's role as one of Yunnan's three major airfields for the Flying Tigers during World War II. Perhaps because of a general lack of information in English about the far-flung destination, I was intrigued — and it didn't hurt that apocryphal accounts claim the province's name is originally derived from the village name. 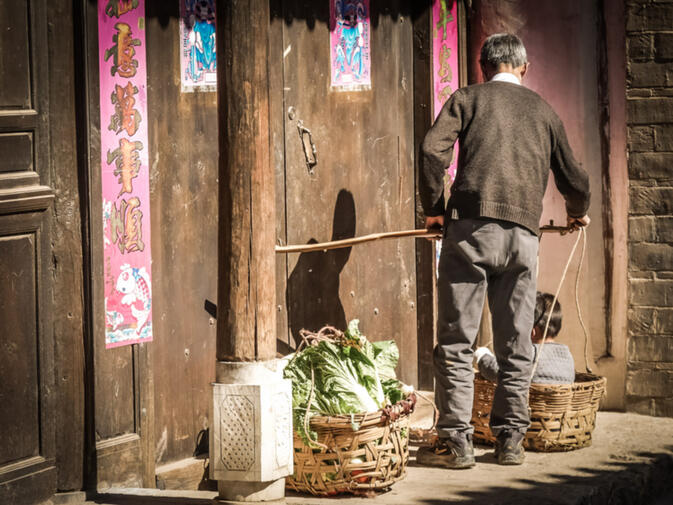 A plaque at the southern end of the town's cobblestone street explains Yunnanyi's involvement in the Tea Horse Road (茶马古道) trade network. In fact, it is the road itself — said to be of original stones — for which the town once received one million yuan in government aid to protect Qing-era residential structures and the street.

For centuries, Yunnanyi was one of many stops on the ancient trading route that saw tea porters make the back-breaking ascent to Lhasa to exchange their cargo for prized Tibetan steeds. And although most buildings in town date from the late Qing era, Han Chinese have inhabited the place for much longer. 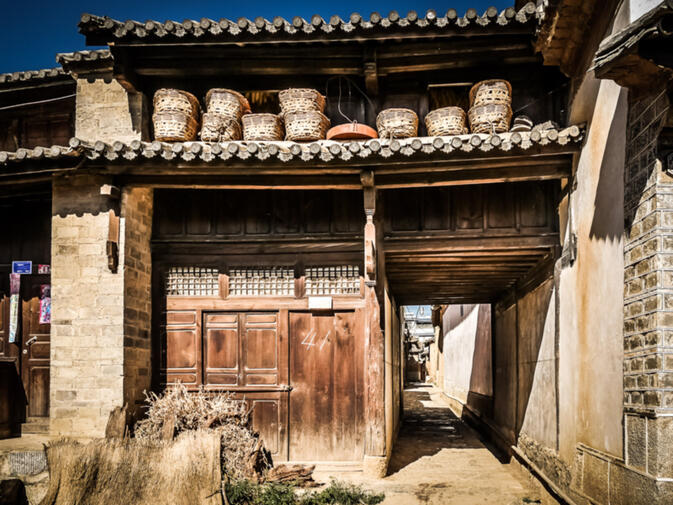 A Mr Zhu, 64, said that one of his ancestors came to Yunnanyi as a Ming Dynasty soldier nearly 600 years ago, and his family has been living there ever since. Zhu, a tailor who now devotes most of his time to repairing clothes, said the government had given his family money for restoration work.

A second memorial plaque at the road's entrance recounts a tale from the Long March, one in which the Red Army stayed in Yunnanyi for one night. According to the etched characters, the locals graciously welcomed the troops and the soldeirs' spirit inspired several villagers to join the cause. Although the summary's conclusion bears telling hints of propaganda, the memorial added another layer to the town's already deep feeling of historical significance. 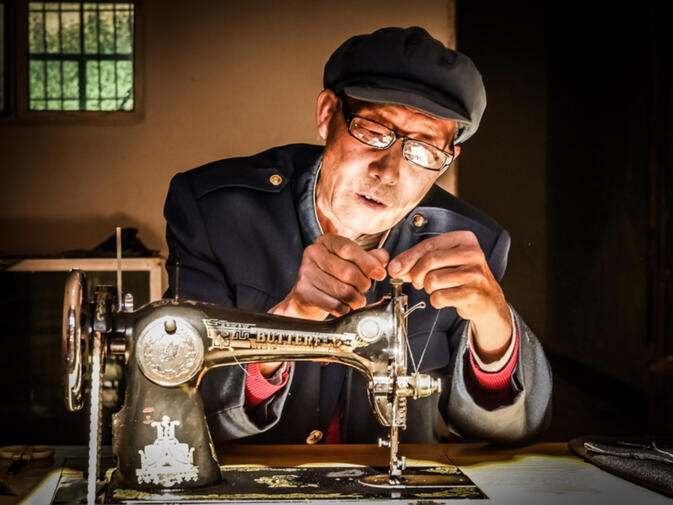 One of the few people visible in town after lunch was Mr Zhu, who looked out on the sun-soaked road from behind his old-fashioned, foot-powered Butterfly sewing machine. He told me most of the buildings on the road were between one and two hundred years-old, and some might have been around for 400 years. He also mentioned one extant Ming dynasty structure that people are not allowed to enter for preservation purposes.

However, in one of the historic courtyard homes we did visit — the well-maintained Qianjiadayuan (钱家大院) — a woman surnamed Qian pointed out wood carvings on her doors that were marred by members of the Red Guard (红小兵) during the Cultural Revolution. Although scarred, the basic gist of the images could still be distinguished. One carved panel featured a pastoral scene with farmers in straw hats carrying loads in from the fields, set in front of a hilly background. 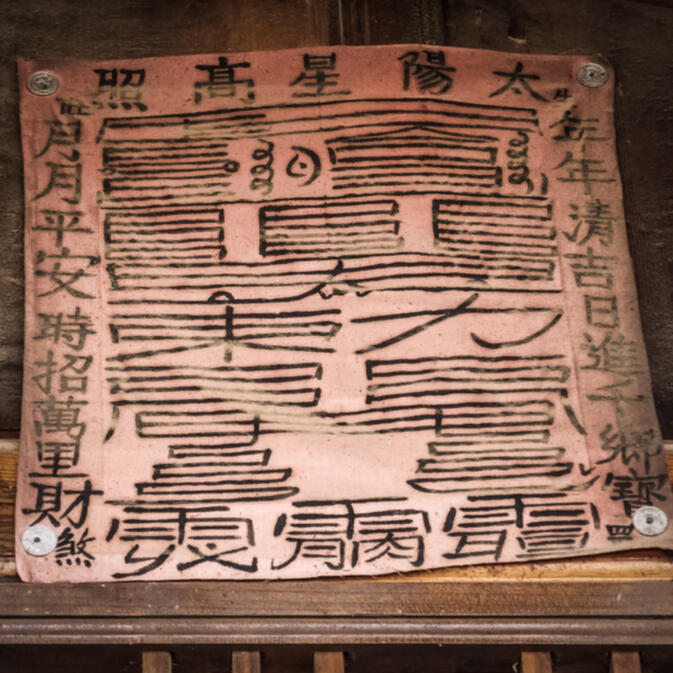 Qian said her residence had changed little over the decades, and when I said that I was American, she mentioned that "American comrades" once gave lessons in her home during the war. A Xinhua report found online after I returned to Kunming did indeed confirm the home served as a classroom for flight preparations during World War II.

Not all abodes in Yunnanyi hosted members of the Flying Tigers, nor the Red Army, but most I saw featured unique calligraphy blessings posted above their front entrances. These, according to Qian, were specific to Yunnanyi. She said that the widened characters, which are at first glance difficult to make out even for a highly literate Chinese person, read gongxifacai (恭喜发财), the common prosperity blessing in China. These words appear in addition to the traditional single horizontal and two vertical banners hung outside the entryways of nearly all local homes. 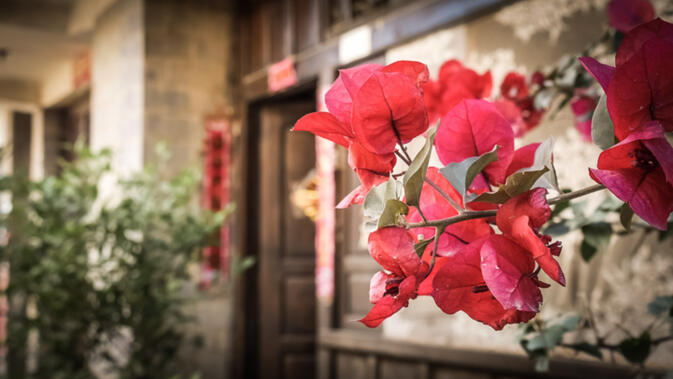 In the few courtyards visible from the road, it also appeared common for residents of spacious ancient homes to grow multitudes of flowers in their atriums. When we visited, it was clear Ms Qian took considerable pride in the sizable collection of flowers in her courtyard.

In the other old home we visited, the gracious owner — who did not grow up in the village but married into a family that resides there — invited us inside to view more abstract, intricate designs etched on the wooden ceiling. Thankfully, these were entirely spared during the tumultuous years of the 1960s and 70s.

Farming, said Qian, is still the area's predominate occupation, and the airfields once used by the Flying Tigers have long-since been transformed into cropland. Mr Zhu added that in addition to farming, construction is another common occupation among villagers. However, the immediate vicinity of Yunnanyi is free of any large, multi-story hotels and apartment complexes. This kind of development is more typical of Xiangyun (祥云县) — 24 kilometers to the northwest — where Zhu's son works as a musician. 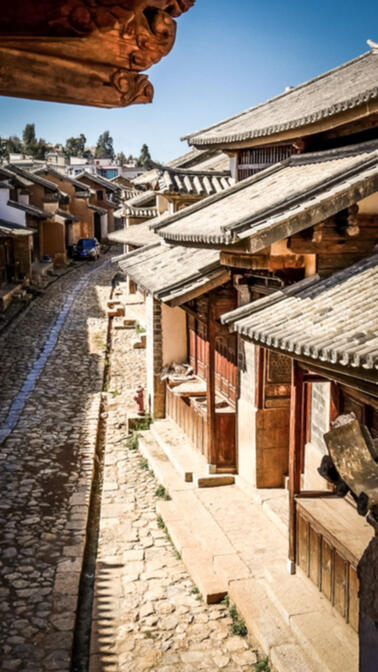 The food we had for lunch at a restaurant called 'Heavenly Delicacies' featured fried, chewy ersi (饵丝) with chili, and was, according to the eatery owner, an extremely popular local dish. Hers was one of the few restaurants visible on the main drag to Xiangyun, and no lodging options were apparent for those wishing to stay the night.

Relative to Xizhou — which we visited before heading to Xiangyun County — Yunnanyi is quite undeveloped as a tourist spot and apparently sees considerably less visitors. However, Zhu told me that it was not entirely uncommon to see domestic visitors, as well as those from many countries around the world, including, he said, France, Germany and the United States, among others.

The Yunnan Tea Horse Road and the Flying Tigers museums were unfortunately both closed when we visited, but they are reputedly noteworthy stops for those interested in this corner of Yunnan's history. While Yunnanyi may appear underwhelming compared with the enchanting — albeit extremely crowded — old towns of Lijiang and Dali, it is absolutely worth a day-trip to see a charming side of Yunnan most people miss.

Yunnanyi is most conveniently reached from Xiaguan (下关) — not to be confused with Dali Old Town. It is a total of about two hours by bus away. From the city's Xingsheng Bus Terminal (大理兴盛汽车客运站), it is 17 yuan and one hour to Xiangyun, where you need to transfer to take a minivan to Yunnanyi. Haggle for your price. This second leg of the trip lasts between 30 and 40 minutes. Remember where the van drops you off on Yunnanyi's main road, because that is where you will find a car to hire for the return trip to Xiangyun. From the drop-off point, it is about a five minute walk west through meandering alleyways to get to the remnants of the cobbled Tea Horse Road. Lovely article. There is some text about Yunnanyi in the Manshu I am translating, at en.wikisource.org/wiki/Translation:Manshu/Chapter_6

I recently acquired an aerial panorama of the area taken to document the airfield in the 1940s. If you are interested you can PM me to arrange a viewing.

History of Yunnan at it's best.

The ww2 airfield was still intact less than 10 years ago. The original aircraft parking areas, which are square U shaped mounds of earth 4 meters high are still there. Two sizes in separate groups, large for bombers and small for fighters. both groups are visible from the westbound G56 highway and google earth.

The outline of the original airfield is faintly visible from GE but has been transformed into a SAM site (surface to air missile) which is part of the modern air field / base a few kms away which is clearly visible from GE, fighter jets and all.