By Patrick Scally in Features on December 13, 2016 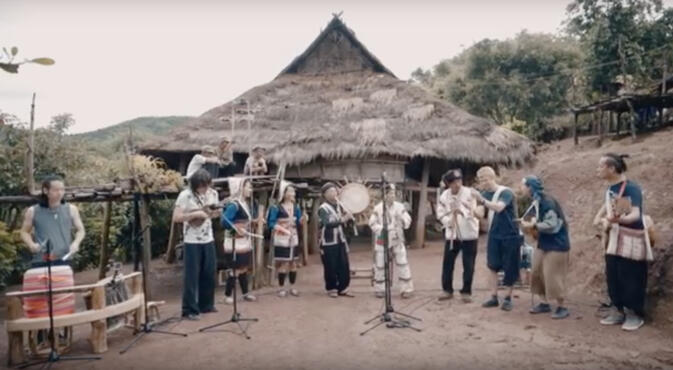 In terms of indigenous cultures, Yunnan stands alone in China. But many of the 25 minority groups who call the province home, and especially those with small populations, are struggling to preserve their traditions. In an effort to give exposure to one of these ethnicities, Shanren (山人) — perhaps the province's best-known cultural export — traveled to Xishuangbanna in the summer of 2016 to explore the music of the Jinuo (基诺) people.

The band was specifically interested in learning about the qike (七柯), a traditional one-note percussion instrument made of bamboo that is specific to the Jinuo. The tone of the instrument varies according to its size, and individual musicians typically play only one during a given song. However, in modern use several qike may be used in a xylophone-like setup.

Along the way to learning about this instrument and the customs surrounding it, Shanren filmed a short documentary called Qike Ami. The ten-minute movie chronicles a collaborative effort by local musicians and members of the band. Together they rehearse and then perform a song traditionally played at the conclusion of a successful hunt.

The song is complex, and Jinuo masters featured in the documentary say they are having difficulty passing on performance techniques to younger generations. Cultural preservation is a common problem amongst the minorities of Yunnan, which is one major reason Shanren visited Jinuo Mountain to find out about the qike.

The band's growing fame in China, following their winning a major television competition earlier this year, provided Shanren with a spotlight they are using to highlight little-known musical traditions hidden in the countryside. One of the Jinuo musicians featured in Qike Ami sums up the collaboration thusly:

This song has 2/4, 3/4 and even 6/8 time signatures occurring. So the young people nowadays have a hard time accepting these traditional forms of music. That's the reason we have difficulties passing this culture on to the next generation. The goal of this cooperation is to borrow Shanren's platform, to let everyone in China, everyone in the world, see Jinuo music and culture for themselves.

First formed in Kunming in 1999, Shanren blends traditional Yunnan and Guizhou ethnic minority music with rock, reggae, ska and rap. And according to Joshua Dyer — who accompanied the band to Jinuo Mountain and provides the film's introduction — the journey to visit and work with Jinuo musicians was also something of debt repayment. In his write-up of the experience, Dyer says:

The band has been playing a song that originates from the Jinuo people, but because of some miscommunication, the band had been introducing the song on stage as a folk song of the Achang ethnic group. Once they realized their error, the band decided reparations were in order.

Excellent short film. It is nice to see something non-han being featured as central subject, and not merely as a subdivision of Chinese culture.