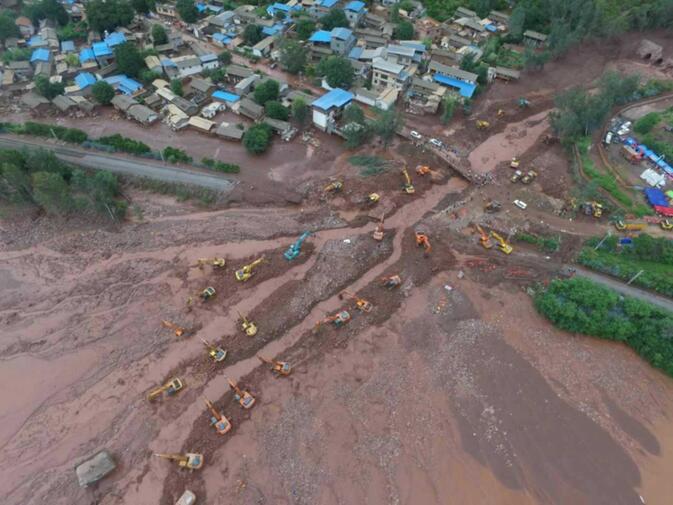 Relentless rains sweeping across central Yunnan over the past week have triggered multiple landslides in Yunnan's Chuxiong Prefecture (楚雄彝族自治州). The largest of these buried passenger railway lines, engulfed homes and forced thousands of people to flee to higher ground. One person has reportedly gone missing, while several others suffered injuries.

Chuxiong, like much of the province, has experienced long and repetitive bouts of rainstorms over the past week. In the prefecture's northern Yuanmo County (元谋县), hillsides already waterlogged from the summer rainy season gave way in several places. A total of ten rural towns and their outlying villages are currently without electricity or water. Seven locals received treatment for minor injuries, and rescue workers continue to search for one missing person.

The largest mudslide occurred between the villages of Hailuo (海洛村) and Zhubu (朱布村) when a huge torrent of mud and rock engulfed both a highway and a 500-meter section of the Kunming-Chengdu Railway. At least 8,000 residents have been moved to temporary shelters. As of this writing, the railway remains closed to all traffic, but provincial officials have said they expect train service to resume by the end of the week.

Clearing the debris, however, may prove difficult. In addition to blocking the railroad, the estimated 1.3 million cubic meters of mud and detritus dislodged during the landslip formed a six-meter deep barrier lake. More than 2,500 rescue workers and military staff working at the scene with heavy construction equipment have so far lowered the lake level by three meters.

The prefectural government initially provided the thousands of temporary refugees in Yuanmo with 700 folding beds, 700 mattresses, 300 tents, as well as staple supplies including rice, cooking oil and mineral water. More relief supplies — primarily tents and blankets — are en route to the disaster area, which continues to endure intermittent and sometimes severe storms.

Despite being nationally known for its picturesque Earth Forest and the 1965 discovery of Homo erectus fossils dubbed 'Yuanmo Man', the area receives comparatively few tourists. With little income from industry or tourism, residents of the largely agrarian area are quite poor. However, if recent Yunnan disasters are any indication, relief supplies may be quickly followed by redevelopment money for those with damaged or destroyed houses and businesses.

I have just returned from a brief trip to Jianshui and rode through about 1&1/2 hours of Miandian Township of Jianshui County. Steep hillsides, and from the road I saw the aftereffects of 3 landslides - nothing quite as dramatic as what is described here and I saw no slides which had fallen on habitations or villages, but if there had been downslope villages or houses they would have been in serious trouble.

The above trip through Miandian was made yesterday - was raining again when I left Jianshui early this morning.