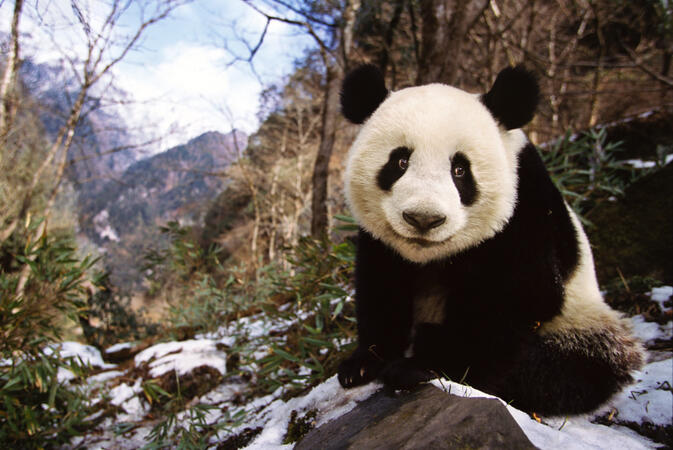 China's decades-long goal of protecting its unofficial national icon reached an important milestone over the weekend. The world's foremost international body on nature conservation removed the giant panda from its endangered list. The upgrade of the beloved animal to 'vulnerable' status is credited to "effective forest protection and reforestation" efforts by the Chinese government.

The announcement regarding pandas was one bright spot in a larger, and largely alarming, report issued over the weekend by the The International Union for Conservation of Nature and Natural Resources (IUCN). While panda numbers are growing due to intense conservation efforts, there are another 23,928 species currently "threatened with extinction", according to IUCN.

Giant panda populations have grown by roughly 17 percent over the past decade, and there are now thought to be roughly 1,850 individuals living in the wild. Twenty years ago, that number was less than 1,000. The animals today roam in remote bamboo forests clustered along the Min (岷山) and Qinling (秦岭山) mountain ranges of Sichuan, Shaanxi and Gansu provinces, and over the past several decades, the Chinese government has spent billions of yuan establishing 67 panda reserves. It has also enforced a series of ever-more-stringent anti-poaching laws not solely concerned with pandas.

Despite their new status, pandas face an uphill battle for survival. The mountain habitats where they live, despite being protected, are under threat from a number of man-made situations. Marc Brody, senior adviser for conservation and sustainable development at China's Wolong Nature Reserve, told National Geographic:

It is too early to conclude that pandas are actually increasing in the wild — perhaps we are simply getting better at counting wild pandas. While the Chinese government deserves credit and support for recent progress in management of both captive and wild giant pandas...there is no justifiable reason to downgrade the listing from endangered to threatened...In fact, 'suitable' or quality panda habitat is [...] decreasing from ongoing fragmentation from highway construction, active tourism development in Sichuan province, and other human economic activities.

Indeed, panda numbers remain very low while risks and obstacles are growing. The animals also have a somewhat notorious reputation as bad procreators. However, while protecting the animals has become something of a national obsession in China, preservation efforts have also have had the unintended consequence of sheltering an enormous array of other animals.

Perhaps scientists are simply counting more accurately, but at least the fight to keep pandas alive has engendered a thread of environmental awareness stretching four decades back into the national conscious. That pandas — while still facing enormous challenges — may be bouncing back, is reason enough for optimism.

Good, but there's not good reason to focus too many resources on them just because they're popular and enjoyed as a national symbol both within China and without. There are a lot of species in danger of extinction who aren't lucky enough to be considered cute.

Yea, and its basically game over by now. You can save a few pandas but while doing so, theres the tiger is gone, the river dolphin, the hornbill, the pangolin, the snow leopard and so on. Even the butterflies of Laos have gone hiding. And its on a global scale, from Africa to Amazon - not only China. Too little is certainly talked about it, but then again, it wouldnt help if a lot was talked either, as its just how it is. And its game over by now.

Defeatism is an excuse for passivity and leaving the ball in the wrong court.

The band Genesis had this refrain to one song:

"There's too many men. Too many people. Making too many problems. And not much love to go round. Can't you see. This is a land of confusion."

"In demographics, the world population is the total number of humans currently living. As of March 2016, it was estimated at 7.4 billion, an all-time record high. The United Nations estimates it will further increase to 11.2 billion in the year 2100."

The odds don't make any difference.

*We can't realistically save all the animals that remain given that a new species goes extinct pretty much every day (most of the time unbeknown to us), but we can slow down the rate of extinction. We have to destroy some habitats to support human life, but we must keep some areas where animals and insects can live undisturbed by humans. The good news is that there is still quite a lot of wilderness. The bad news is that we have been disturbing at an incredible rate for the best part of a century.