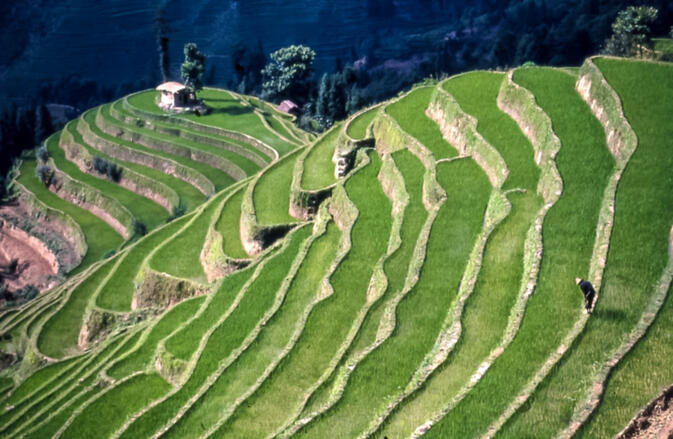 Sometimes farms are the tourist lure. It could be because they are sited in places with spectacular backdrops, but then it's the totality of the scenery that draws attention, not the farms themselves. In other cases, though, the farm per se is the attraction. Its shape, its location and its obviously intricate water engineering system are what capture the eye.

Perhaps nowhere in southwest China are simple farms the stars of the scenery as much as in the Ailaoshan (哀牢山) mountain range of southern Yunnan. This is especially true in Yuanyang County (元阳县), between the Red River and the border of Vietnam. Every year at New Years, a contest draws dozens of photographers seeking to shoot the county's farms in prize-winning light and settings. 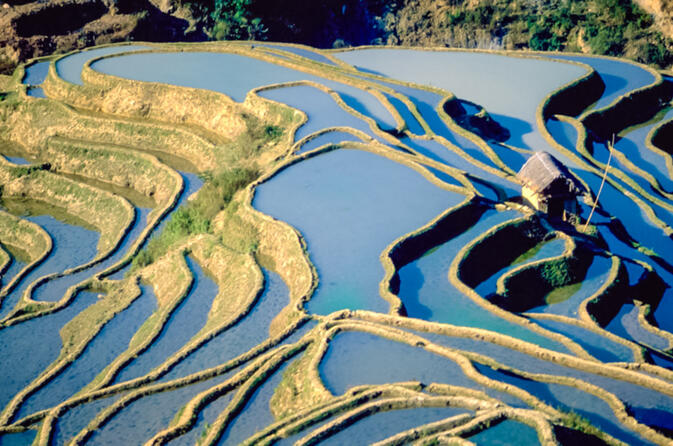 These are no ordinary farms, of course. They are terraced parcels cut into the slopes, sometimes sculpting three-fourths of a mountainside. From the forest near the summit to the streams at the bottom, every promontory, knoll and hillock is terraced. On the more gradual slopes the plots can be fairly large, but some of them sit on slopes of up to 70 degrees, where the terraces are long but narrow. The great majority are used but once a year, for the summer rice crop, and are kept filled with water during the other months.

The Ailaoshan terraces were mentioned in Tang Dynasty chronicles, the earliest instances ever recorded of such farms anywhere in the region, and are therefore at least one thousand years old. They are mainly the work of the Yi and Hani minority nationalities. Most villages in the mountains are either Yi (彝族) or Hani (哈尼族), with the Yi more prominent in the northern part of the county, while the Hani predominate in the southern part. Until you can see the traditional costumes of the women though, it's a bit difficult to tell the villages apart. 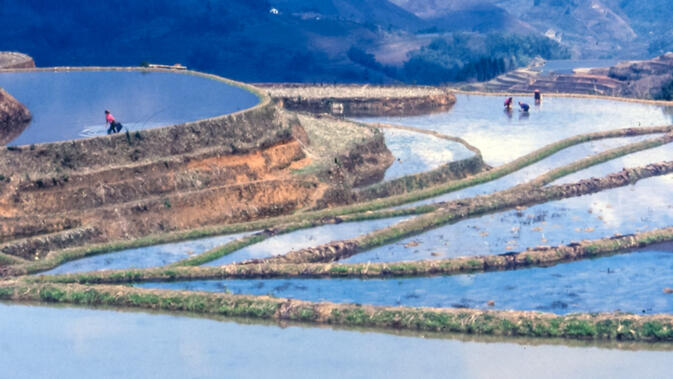 Yi and Hani build box-like houses of mud brick on stone foundations, each with several small rooms. The upper floor has a flat roof for drying crops. Some Yi villages, and all Hani ones, append a room on part of the roof, with sloping sides, used for storage. Most villages are quite large, up to a hundred houses bunched together near a spring, whose flow is directed into the terraces below. Vegetables are grown in the plots closest to the village.

The rest of the terraces are mainly reserved for rice, except for the newest ones. In these new farms the people cultivate maize and soybeans for the first few years. The bed of the plot is initially covered with a layer of rough gravel and only after three to five years is the terrace ready for inundation. After filling them with water, the farmers keep them permanently flooded, adding tree branches and sand after harvest season to prevent the ground from becoming too soft for plowing. To enrich the soil they use animal manure and other natural fertilizers, such as soy plants surrounding the borders of a plot. 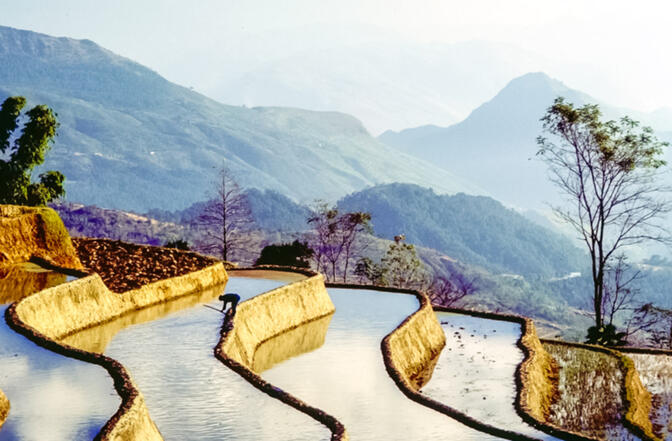 Most of the terraces are watered by springs above the village, the flow of which is carried along various irrigation channels along the uppermost terraces — a length that can reach several kilometers. Divider logs, or in the older areas carved stones, direct part of the flow over clusters of fields. Spillways between plots carry water from higher terrace to lower, all the way down to the drainage channel at the bottom. These channels, as well as the springs, are no one's private property but are owned collectively by the entire village. Village representatives select one man whose full-time job is to check and maintain the main irrigation channel, oversee distribution to each terrace, and in general make sure nobody is stealing water.

Planting traditionally begins at the onset of the monsoon in late May. The crop ripens in late August, splashing the mountains with patches of golden yellow. In September the farmers crop the grain, threshing it on the spot by whipping the stalks against a V-shaped funnel of stiffened buffalo hide. Repairs to the main irrigation channels, as well as the terraces themselves, follow the harvest. The terraces are left flooded until the next planting. The scenery is at its grandest on winter mornings, when a thick fog blankets the valleys and lower altitudes, leaving terraced fields to pop up over the clouds like islands in the sea. 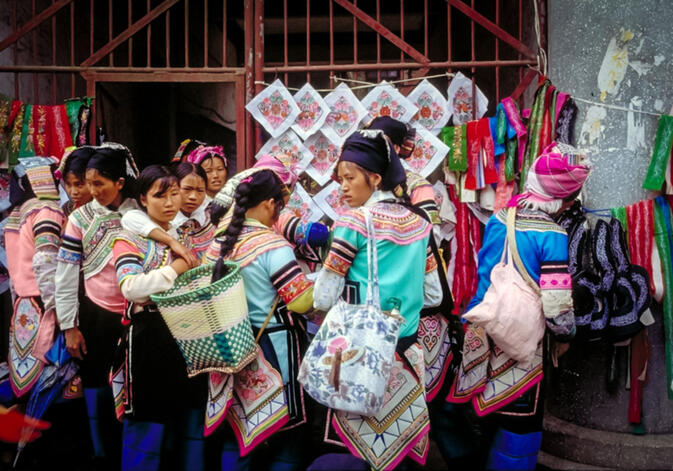 The people and places of the terraces

The people inhabiting these mountains are among the most conservative in the province. One might expect that from folks using the same terraces for hundreds of years. Villages are electrified and many houses have televisions. All sizable settlements have primary schools, while the townships and cities have middle schools as well. The men have largely adopted modern styles of clothing, except for those of the Yao (瑶族) and Miao (苗族), but women of all ages retain their ethnic costumes and so do a large proportion of the children.

Four kinds of Hani inhabit Yuanyang County, and several more live in neighboring Honghe (红河), Jinping (金平) and Lüchun (绿春) counties. The Hani around Xinjie (新街) wear a side-fastened, long-sleeved jacket over trousers. The basic material is blue or black cotton, occasionally white, blue or purple silk, with embroidered cuffs and lower sleeves and stripes along the hem and around the ankles. Married women wear a fringed black turban with a long, silver-studded tail. Another Hani group wears a more brightly embroidered blouse, a black cap with silver studs on the front, and a belt with long tassels with embroidered spiral designs. A third group wears skirts instead of trousers, while a fourth dons jackets with sections done in tie-dyed indigo.

Over an ordinary long-sleeved blouse, the local Nisu Yi women wear a bright, short-sleeved jacket, with embroidered strips around the shoulders and on the sleeves. In cooler weather they wear a black vest over this, either studded with silver across the front or instead stitched with thick white stripes. Around the waist they tie a belt with long wide tails, featuring pile-embroidered spiral and floral patterns, which hang over the buttocks.

In Honghe the patterns are flat-embroidered and more complex and pictorial. The women here tend to favor hand towels as headgear, rather than the embroidered headscarves of Yuanyang. In the latter county, too, the young Yi girls sometimes don a chicken-shaped cap, embroidered in white or studded with silver. The same style in Honghe is worn by Hani girls, but not Yi. 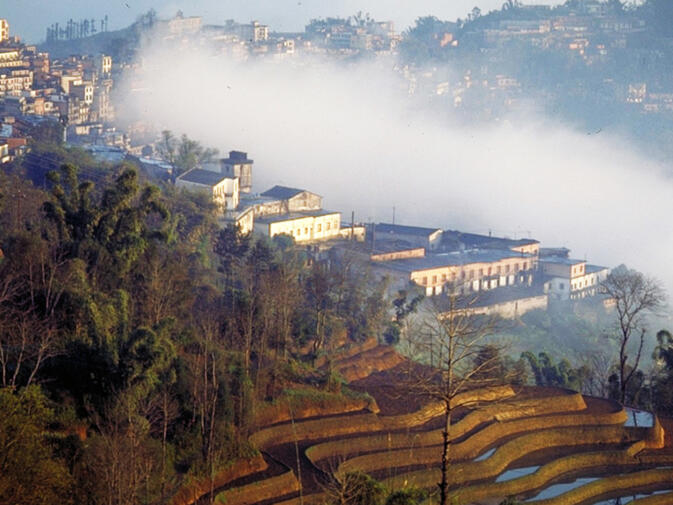 Old Town Yuanyang, now called Xinjie, lies 25 kilometers south of the Red River from New Yuanyang, the county capital since early this century. The road immediately begins climbing uphill until it reaches the city at around 1,700 meters of elevation. Yi and Hani villages sit on slopes above their terraces at intervals all along the way. The town itself was built as an uphill extension of the original Yi village, just as Huangcaoling (黄草岭), further south, was expended around the original hilltop Hani village. Many Yi and Hani have settled in Xinjie, but one of the charms of the town is that the women in the markets and the girls working in the restaurants still wear their ethnic costumes. The proximity of traditional villages, the terraces on the near and distant mountains, and the general friendliness are the area's other primary assets.

The road south runs by more of the same beautiful scenery, then crosses a pass and winds around spurs and ridges to Panzhihua (攀枝花), where the most spectacular terrace views can be had. As far as the eye can see, the contours of the mountains are covered with terraces, villages perched above them. According to a local Yi headman, these particular terraces were cut 700 years ago by Yi who migrated here from the rolling, less steep hills south of the Red River. 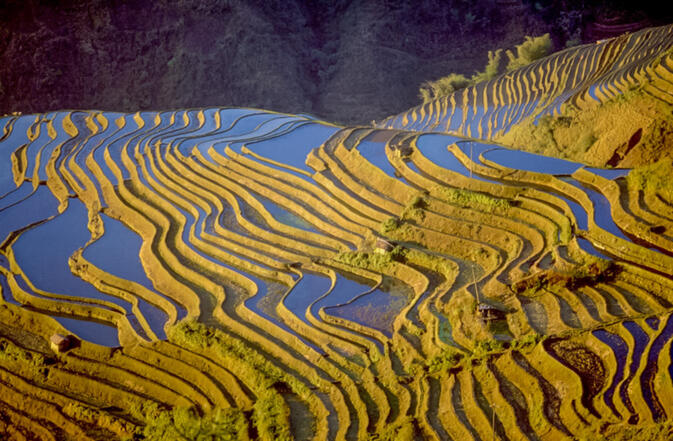 From this township the road drops to the valleys, where the Dai (傣族) people live. Here the land is fairly flat alongside the rivers and so the plots are larger and interspersed with plantain groves. The Dai here are animist, not Buddhist, and live in the same kind of houses as the Yi and Hani with one addition — a large variety of fish traps. The women wear black sarongs, with cross-stitched leggings with black, short-sleeved, Yi-like jackets brightly embellished on the hem and sleeve ends. Standing on the bridge at Huangmaoling (黄茅岭), watching Dai women drive their buffalo home past the rice fields, palms and papaya trees, with a group of boys swimming in the stream beside the gnarly roots of a big banyan tree, one could just as well be in Thailand or Laos.

Huangmaoling holds market day on Saturdays, while further down the road, Laomeng (老猛) has its market day on Sundays. The ethnic variety in the county is highly evident at these events, particularly in Laomeng, which is more likely to have remote Hani, Yao and Miao shoppers. The Yao are of the Lanten branch and wear all black, except for the youth, who don caps with colored pompoms. Miao women are recognizable by their skirts and upswept hairdos. In marked contrast to the shy Yao, they are quite approachable and the men eager to converse with foreigners. 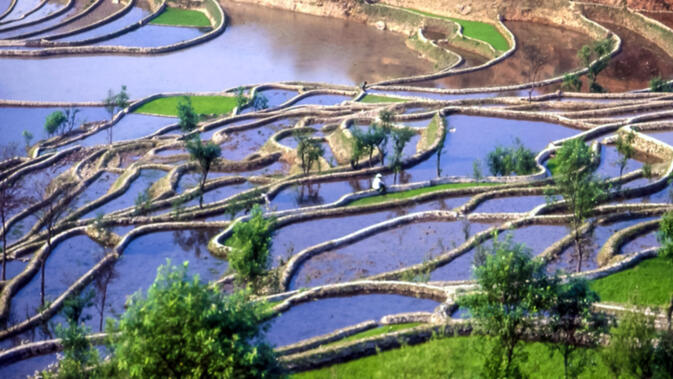 In general the people of the Ailao Mountains are friendly and good-humored. Sometimes they stare at foreigners as if the outsiders had just stepped out of televisions and suddenly became three-dimensional. But once people become conscious of their staring they often apologize and ask the no one take offense. They are proud of their terraces and so are quick to appreciate an outsider's admiration. They have held fast to their cultures and celebrate their annual festivals — Yi Torch Festival in mid-summer and Hani New Year in November — with great fanfare, whether in Yuanyang or the outlying villages. Their self-assurance and general contentedness with life soon affects most visitors, who can't help feeling happy just visiting such a place. 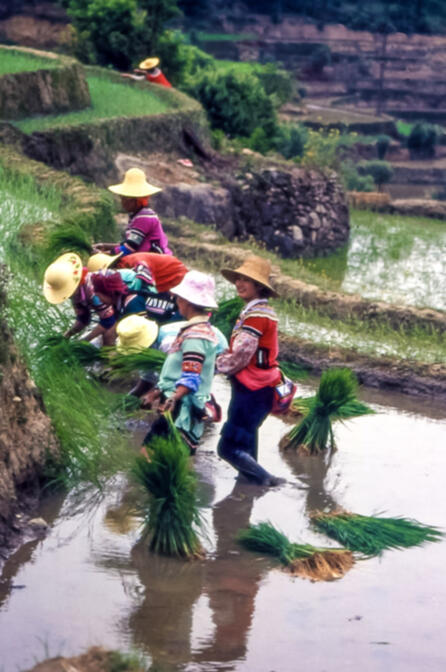 As usual from Jim, highly informative - and great photos.

"THE TERRACE BUILDERS: The Hani and Their Neighbors in Yunnan's Ailao Mountains"

This is one of the best travel reports I read. Thank you very much, Jim Goodman, I read some other great stories from him too...

He's published something in the neighborhood of 12 books - he's indefatigable.

Great piece and an interesting place, too. Thanks!

Great Story. Wish I would have read it before I took the road trip this weekend. It was an amazing place.

April 15, 2021 "We are looking for a part-time English teacher to work at our partner public school. Work days are Wednesdays from 9:50 am to 3:30 pm. Requirements …"
Travel Yunnan Ricklane