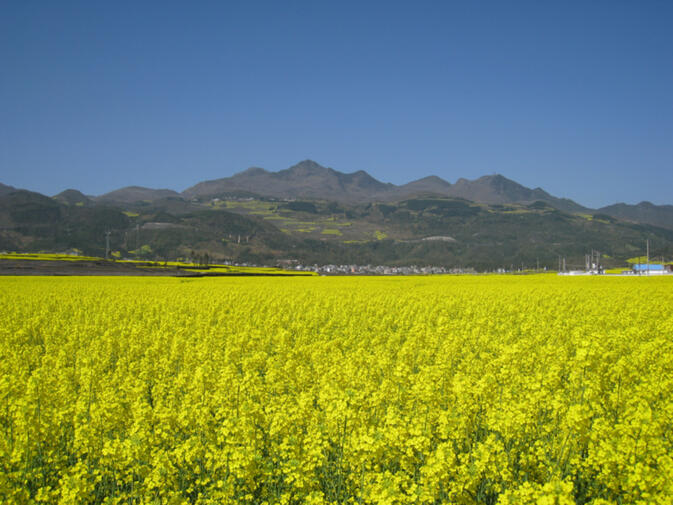 A little guanxi helps. Helps a lot, as I discovered on Baila Mountain (白腊山).

I first glimpsed Baila from afar, distant and fetching on the horizon. Double peaked from one aspect, solitary and steep from another. I felt drawn to it. When I traveled to Luoping (罗平) for a closer look, the feeling grew stronger. There it stood, rising magnificently above fields of yellow flowers. Massive with multiple peaks and sub-summits, I wondered how to approach it. Buildings and towers topped off some of the peaks, so there just had to be roads and trails. I searched the internet in English, finding little that would help me climb it. For a year my desire simmered.

Then guanxi kicked in. My Chinese wife, Sandi, had a high school friend living in Luoping City. Her husband had climbed the mountain.

Not only that, Mr Qin would lead us up the mountain. Double perfect. I asked Mr Qin if he knew the summit elevation. He flashed his cell phone and found the answer in seconds — 2,468 meters. So, English alone won't suffice. Got to learn how to search the Chinese internet. 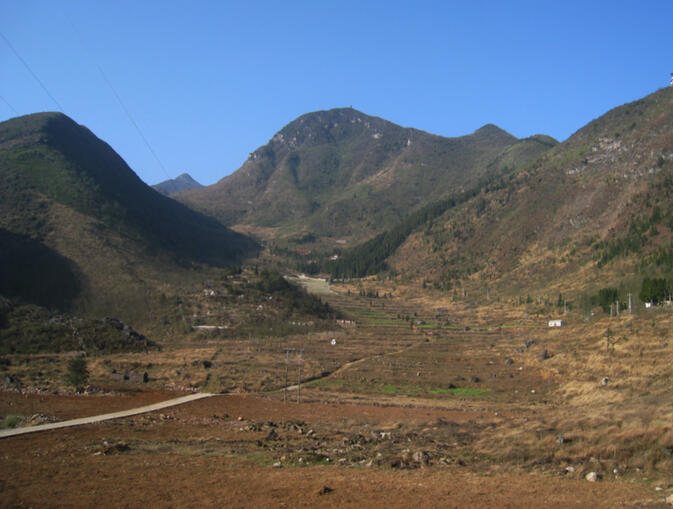 Baila is the highest mountain in eastern Yunnan's Luoping County, rising one thousand meters above the city of the same name. Outside the city lie vast fields of cultivated canola plants. In winter and spring, travelers arrive from all over the world to photograph the intensely yellow flowers. From these fields, the mountain presents three prominent summits — Baila 1 (一白腊) on the left, slightly lower Baila 2 (二白腊) in the middle, and Baila 3 (三白腊) to the right with a visible summit tower.

An ancient legend tells how the mountain came into existence. A long time ago an ocean covered Luoping. A white dragon and nine black ones fought fierce battles for dominance. The black dragons bore holes under the seabed and the ocean drained away. The white dragon died on the parched land and became Baila Mountain. The black dragons carved out a river basin, which in time came to have many waterfalls, one for each of them. We know them today as Jiulong Waterfall (九龙瀑布), one of the most scenic waterfalls in China, and developed accordingly. 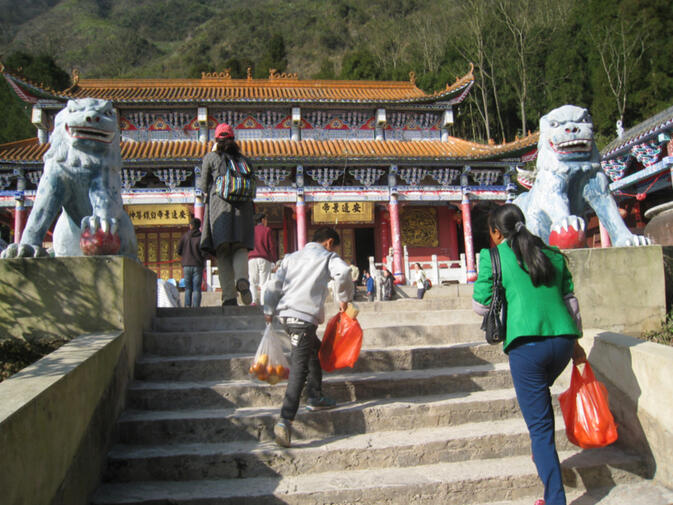 The jumping off point for our ascent was a Buddhist temple just outside Luoping. We reached the temple by car in less than an hour. With Baila 3 towering overhead, the scenery was more awe inspiring than I had expected. In my excitement, I left my wool hat in the car, but no matter. On this warm and sunny winter day I wouldn't need it.

We paused to tour Dawn Temple (晓寺). Visitors and pilgrims ambled around, sightseeing, lighting incense and prostrating themselves before deities. A recording emerged from loudspeakers, and we heard the sound of monks chanting to the beat of drums and cymbals.

After the tour, six of us started the ascent of Baila 3. As we climbed higher, more chanting drifted up through the trees unceasingly. Vegetation overhung the trail, requiring care to avoid scratched arms and faces. Under wet conditions one would get soaked through and through. At a rest stop I spied a telecommunications tower on a nearby minor summit. Scurrying over, I gained an excellent view of the mountain's east face. A grass and dirt road zig-zagged up the mountain, and far above, a car slowly inched its way higher. 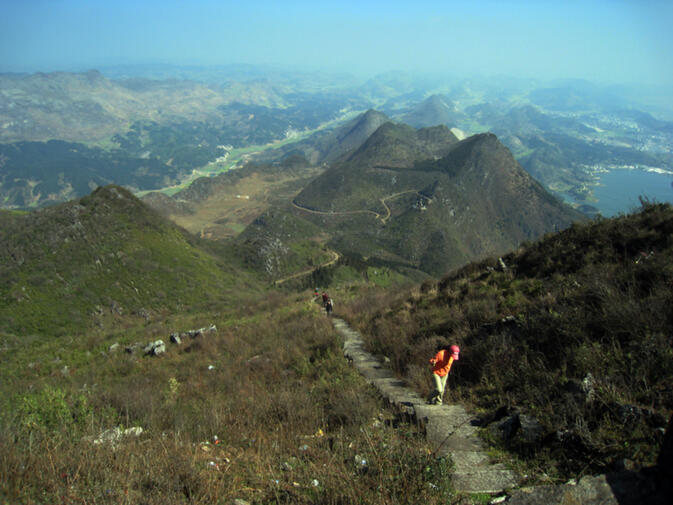 The ascent continued on a staircase of stone slabs. The flagstones wobbled underfoot, and I contemplated catastrophe. What if a slab rocked out of place and crushed my foot? Thankfully they were fairly solid.

After nearly two hours we reached the summit of Baila 3. The views were simply awesome — looking up to the gray-brown peaks of Baila 1 and 2, down upon the orange roofs of Dawn Temple and the blue waters of Dragon King Temple Reservoir (龙王庙水库), out to the white city and the yellow fields. Two metal towers stood on top. The crown of one had toppled over, hanging as if suspended by a thread, ready to crash to the ground. The other, constructed more robustly, left me uneasy as I watched its round radio antenna jimmied about by the wind. 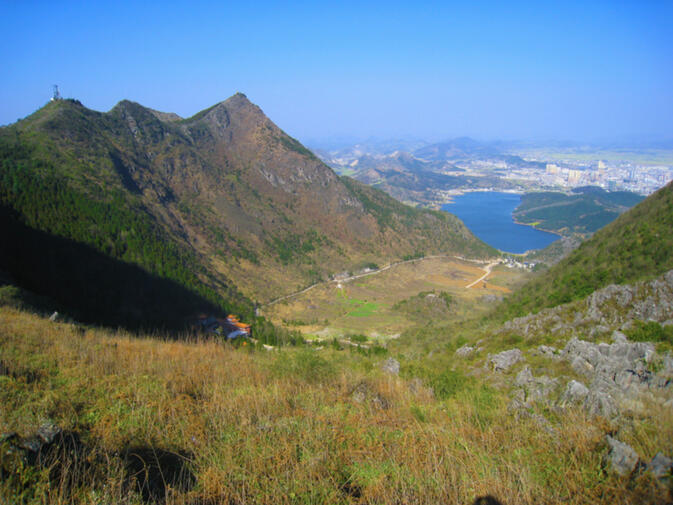 When I turned my gaze toward Baila 1, I noticed something weird — a series of towers spaced evenly across the summit, nine of them. Flags? Antennas? Lightning rods? I had never seen anything like it. And why were there nine? Like the nine floors of a pagoda? Or the nine dragons? I wanted to find out. But even more I wanted to complete the journey to the top. Nothing less would satisfy. Mr Qin said it would take two more hours and I was delighted he was keen to go. The two of us pressed on, while the rest of our party descended to the temple.

Even though it was a warm day, I wore a windbreaker to ward off ferocious blasts that kept stripping the sun hat off my head. I asked Mr Qin if he wanted a hat in case it got cold, or any clothes beyond the single jacket he was wearing. "No problem, I'm used to it," he said. His want of clothing momentarily surprised me, but shouldn't have. My own problem is I am not used to it, you see. In southern China, there is no heat in homes and buildings. In winter I have to wear twice as many clothes as local Chinese people. Spoiled, I suppose, by decades of central heating. None such for Mr Qin, who seemed unaffected by the weather. 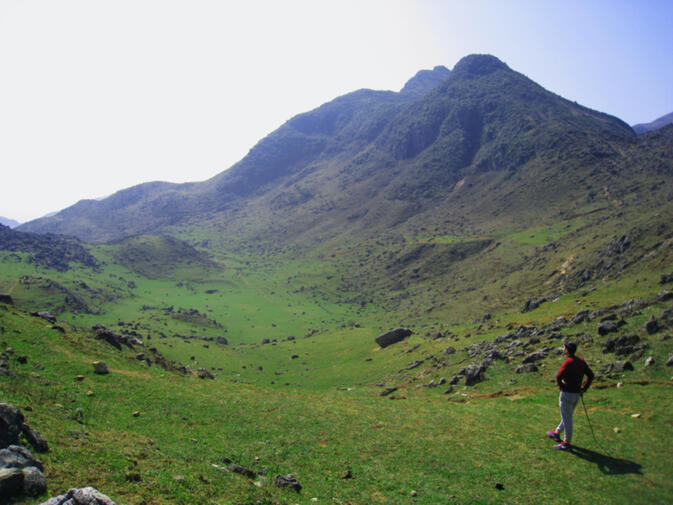 We descended to an idyllic valley, surprisingly green in the middle of winter. Horses and donkeys were scattered across the 'High Meadow' grazing. We turned our attention to a visible track on the north side of the field. After a short ascent we reached a shallow valley — 'The Trough' I called it — that sloped gradually toward Baila 1. High to the left loomed Baila 2, but we would not have time for it today.

We enjoyed a leisurely stroll up The Trough and eventually reached a col. Looking down the west side of the mountain, Mr Qin appeared perplexed. He spent some time picking out the way forward. Finally we descended toward another meadow where more horses grazed, and started bushwhacking through shrubs and thorn bushes. Thorns pierced my windbreaker and wouldn't let go. Mr Qin came to the rescue, unexpectedly producing a pair of pruning shears to cut me free. We noticed a man below, apparently the caretaker of the horses, advancing toward us. After a shouted conversation between him and Mr Qin, we tried a different trajectory. This one was better, though still part bushwhack. Mr Qin raced ahead, while I followed slowly, breathing heavily from the uphill exertion. We reached an open slope from which we could see the summit towers and soon we were on top. Needless to say the scenery was magnificent. However, two distractions diminished the experience. First, the copious amount of trash, which one encounters so often in China. Second, the strange complement of dilapidated towers. Some were equipped with forlorn solar panels, while others served no purpose that I could discern. A few locked iron boxes sat sturdily on the ground, contents unknown. Mysterious. A telecommunications facility in disarray perhaps.

We saw ten other hikers on the summit, and fifty the entire day. Not too many considering it was a weekend during Spring Festival. And far fewer than the hordes of the Western Hills near Kunming. On the descent we discovered what went wrong. We had gone too far crossing over the col. We should have ascended the slope before reaching the col. The descent passed quickly and we reached the temple two hours after leaving the summit. Our friends and family waited for us in Luoping, and not long after our hike we joined them for dinner, tired and satisfied. The ascent of Baila Mountain — 2,468 meters — begins at Dawn Temple (晓寺) on the southeast side of the mountain, at approximately 1,800 meters elevation. From the northwest outskirts of Luoping City, paved roads lead to the temple in about seven kilometers. In Luoping, drive northwest on Wenbi Road (文笔路) until it enters a tunnel. Continue into the tunnel and climb steeply uphill for several hundred meters.

After exiting the tunnel, turn right, continuing a few hundred meters before turning left. After a kilometer or two, turn left and descend to the dam at Dragon King Temple Reservoir. The road skirts the shoreline and ascends steeply above the reservoir. Take a sharp right at the sign announcing Dawn Temple and immediately enter a blind, one-lane tunnel — be careful! — under the Yunnan-Guizhou railway. Continue another couple of kilometers to the temple, with Baila 3 towering impressively above. Just before the temple there is parking for twenty cars. After a short, steep climb, the road ends where a few more parking spaces are available. From the lower car park stone steps ascend to the temple entrance. The trail to the right of the gate skirts the temple compound and climbs steeply to the summit of Baila 3 from the east. Most of the trail is paved. Time to summit: two hours.

This provides the shortest hike to the summit of Baila 1, with an elevation gain of 700 meters. Route finding skills are required as paths diverge and disappear. For this reason it should be considered a route instead of a well-defined path. Take the trail to the left of the temple and ascend to a small col and barbed wire fence at the edge of the High Meadow.

For Baila 3, hike up the meadow to the road and summit towers. For Baila 1, cross the meadow and ascend out of the valley to The Trough and then onward to the top. Time to summit and return: six hours. Take note that on the upper portion of The Trough a well-worn path leads up to and over a col. Note that the shortest route to Baila 1 ascends the slope to the right before reaching the col. Caution on descent of Baila 3

If you ascend the East Face trail and wish to descend the High Meadow route, please take special care. The south face of Baila 3 is dangerously steep and unsuitable for hiking. For a safe way down, descend the summit road a short distance until a well-worn path veers off to the left. Follow this path down to the High Meadow. Look for a small col on the left traversed by a barbed wire fence. Slip under the fence and follow the trail down to the temple.

If you are interested in visiting Luoping, or anywhere in Yunnan, Kunming-based tour operator Wonders Of Yunnan Travel provides rental cars with drivers, hotel bookings, all sorts of travel related services and other valuable tourism information. Please get in touch directly for further details. 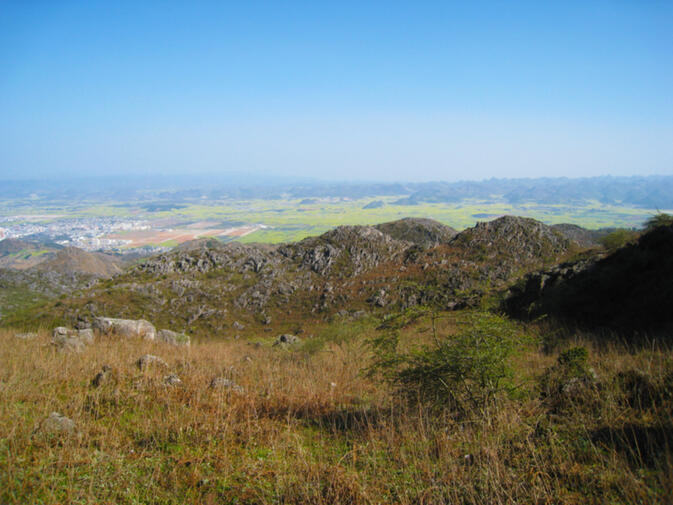 Getting Away: Jiaozi Snow Mountain