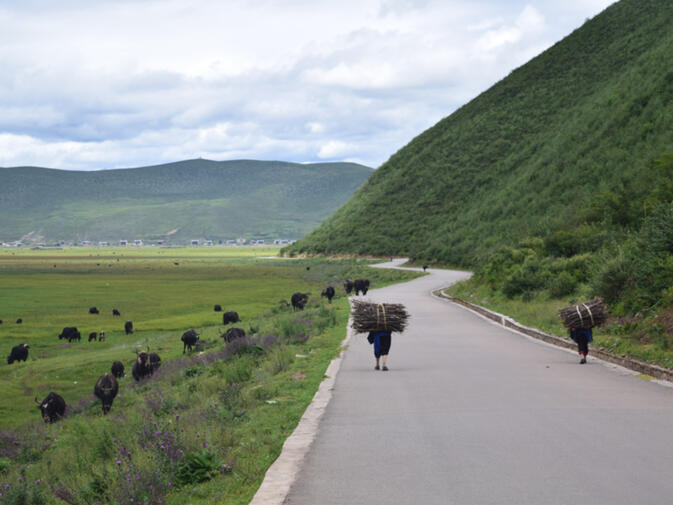 China's Reform Era has helped enrich tens of millions of people, especially those living near the country's east coast. Historically, Yunnan has lagged far behind. However, the provincial government has made it a mandate to raise impoverished and often remote communities out of destitution through incredibly expensive and expansive road and transportation initiatives. Pilot programs have proven fairly successful on a small scale, but are now being put to the test on a province-wide basis.

Figures released regarding Yunnan's Thirteenth Five-Year Plan show the government will spend an estimated 500 billion yuan (US$83.45 billion) on infrastructure investment between now and 2020. The bulk of the money will be spent on improving or building entirely new road networks, especially to far-flung towns and hamlets across Yunnan's ubiquitous mountains.

Upgrades are underway along "seven interprovincial and five international highways" — projects in line with long-standing plans to make Yunnan a conduit for multinational trade between China and the countries of South and Southeast Asia. Augmenting the overland improvements will be port expansion ventures along rivers in southern Yunnan aimed at accommodating larger transport ships.

While promoting international trade is of huge significance to Yunnan, so too is finding a viable way to more closely integrate remote areas into the regional economy. One example of government thinking on this matter can be found in the province's northeast. Hit by a 6.5 magnitude earthquake in 2014 that left much of the prefecture devastated, Zhaotong (昭通) is now undergoing 60.8 billion yuan (US$9.8 billion) in new road construction. The hope is substantially increased interconnectivity will bolster the region's flagging economy — where most household incomes fall well below China's poverty line.

Building on the work in Zhaotong, the Yunnan government will fund the construction of 90,000 kilometers of new rural roads in the province over the next four years. When finished, the additional thoroughfares will nearly double the existing length of the countryside network.

The province has recently made great strides in reducing the number of people living on a yearly income of less than 2,300 yuan (US$360). Now, the focus has been put on ending 'absolute poverty' South of the Clouds entirely by 2020, with infrastructure as the apparent silver bullet. Beijing is watching carefully how well poverty alleviation projects succeed in Yunnan, with President Xi Jinping saying during a 2015 visit, "time will not wait".

Image: Polski on the Road

But of course the machine running this operation is still going to be producing increased relative poverty.

I just hope they can do a better job of preventing them from being destroyed within six months by illegally overloaded trucks.

It would be nice if they just finished the Metro lines in Kunming. Heard say they ran out of money.

Did they run out of money or did some one run out with the money.

According to multiple sources, including the Kunming Transit website, subway Line 3 is supposed to be operational by the end of this year.

sounds like a desperate attempt to boost the economy rather than fulfilling a really necessary need. Yunnan's roads are not of such poor quality. Well let's hope it works, whichever the target.