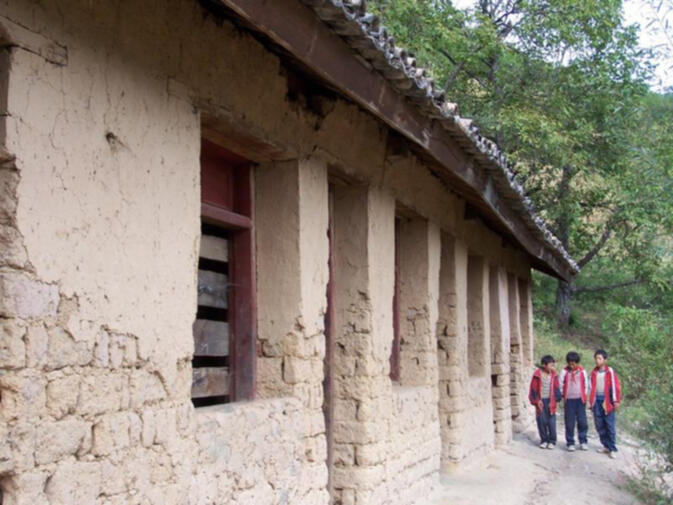 A school dormitory and pupils in Kangpu Village

A man attempting to raise money for impoverished children in northwest Yunnan arrived in Beijing on May 26. Upon reaching the capital, Tian Baijun (田柏君) completed a goal he set more than two months ago when he decided a cross-country stroll was his best opportunity to publicize the need for increased funding for education in the remote prefecture of Diqing (迪庆).

Tian began his walk on March 20, setting out from Kunming with little other than his cell phone, backpack, tent and camping supplies. He walked for 68 days straight, rising at dawn and slowly making his way northeast until finally reaching his destination in Tiananmen Square. The journey covered nearly 3,000 kilometers, taking Tian through Guizhou, Hunan, Hubei, Henan and Hebei provinces.

The walk was more or less a publicity stunt, although not for Tian himself, but instead for children living in tiny Kangpu Village (康普村) in northwest Yunnan. Tian told reporters he spent time there on vacation following Spring Festival and was struck by the "backwardness" of the area, especially the underfunded and under-equipped elementary school.

He vowed to raise money for the school, telling administrators he would be back to help out however he could. Tian then returned to Kunming, where he was working in the medical field, quit his job, and set out to walk to his home in Beijing. The 28 year-old hopes the deluge of media attention surrounding his trek will inspire people to donate money to the school in Kangpu Village and will now reportedly spend his time raising money personally before he heads back to Yunnan.

Kangpu Village lies roughly 80 kilometers west of Shangri-la on the banks of the Lancang River. It is a fairly remote and poor area and its Lisu minority residents make their livings farming cash crops such as soybeans and canola. Those involved with education in the area are grateful for Tian's efforts.

Contacted by reporters from Beijing, a third grade teacher in Kangpu surnamed Zhou said she was originally skeptical of Tian's plan. Many of the 200 pupils at her school live in crumbling mud-brick dormitories that in the winter are without heat. But a cross country walk did not at first seem like a particularly helpful endeavor. "I didn't expect him to keep his promise," Zhou told reporters, "but he's really gone and done it."

Nice story. Good on him.

I hope the people are raising their own food as well as cash crops.

How can one contribute to these schools?

He walked 40+ km everyday for 68 straight days. If his cardio wasn't good before, it is now.