Getting Away: Cycling and camping at Fuxian Lake 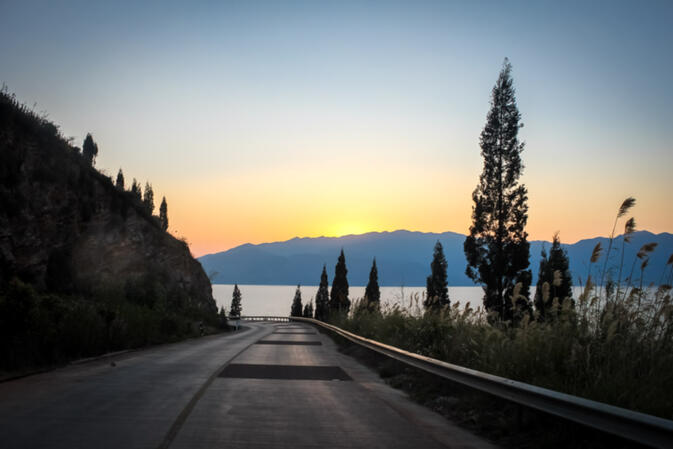 Fuxian Lake, 60 kilometers southeast of Kunming, is ideal for a one or two-day trip out of the Spring City. We left by bus in the morning, camped overnight and were back in town the next day at 8.30pm, quite sunburnt. The whole cycle is 90 kilometers round, and could be done in a full day.

Cycling around the lake

After lunch in Chengjiang (澂江县), we rented bikes from a bike shop 10 minutes walk from the bus station, costing 200 yuan for three people over two days. We were advised to go round the lake clock-wise, which turned out to be a good option. After heading directly South from Chengjiang we reached a road skirting the east side of the lake, with spectacular views. We were never more than a few kilometers from small, lakeside town, some of which have little beaches, with various people lounging in paddling pools.

In March scarcely did we see others swimming, though personally I thought it made for a refreshing dip. The coldness comes from the depth of the lake, and snorkels can be rented for about 50 yuan and used to see fish on the east side of the lake, as well as the remnants of an old underwater city on the western side. 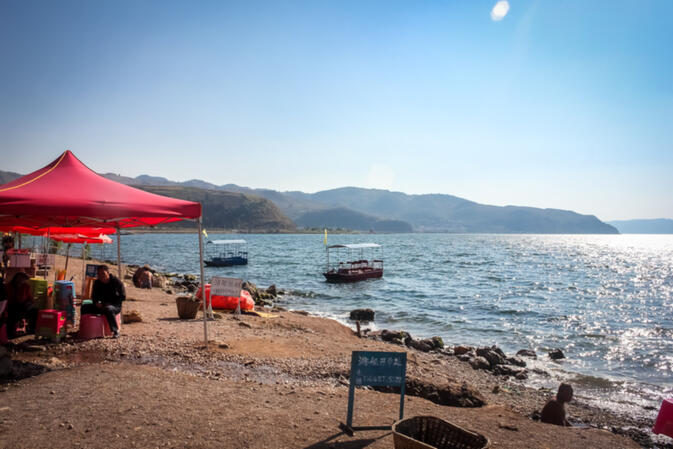 Many restaurants sell delicious fresh fish from the lake, often stewed in metal bowls for about 40 yuan per kilogram of fish. In addition to these, you can find fried shrimp and whole fried crabs on the street-side. We finished cycling at about 7pm on the first day and the next morning made a start at 8 — stopping for breakfast at a busy market 30 minutes ride away. We had to overshoot the south end of the lake by about three kilometers and take the motorway before getting back onto the lakeside section.

From there, the road then goes almost the whole way along the west side of the lake until it reaches a steep climb at the northwest corner, leading onto a motorway which ultimately leads you back to Chengjiang. This side has more restaurants and man-made beaches, but also makes for a very beautiful ride. We stopped for lunch at Gushancun (孤山村), opposite a picturesque island called Solitude Hill. 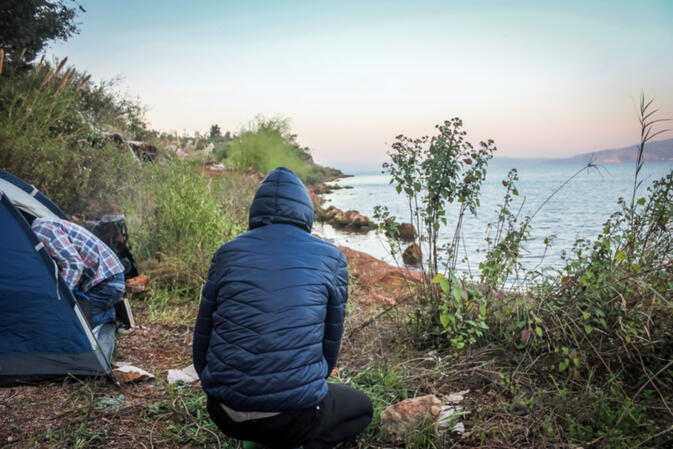 Camping is quite restricted around the lake, with signs warning against camping in 'zone one' protected areas. We found a secluded part of the beach off a dirt track just past Shijiacun (世家村), halfway down the east side of the lake where camping was not noticeably prohibited.

The stars were very clear and a lot of dry brushwood nearby made making a fire fairly easy. Sadly, our tent had a hole in it, but because it was the dry season, it was not a major problem. However, beginning in April, mosquitoes are said to become a very real consideration. Camping beside the lake is probably advised as the breeze helps mitigate some bug problems, and it's likely to be fairly flat. 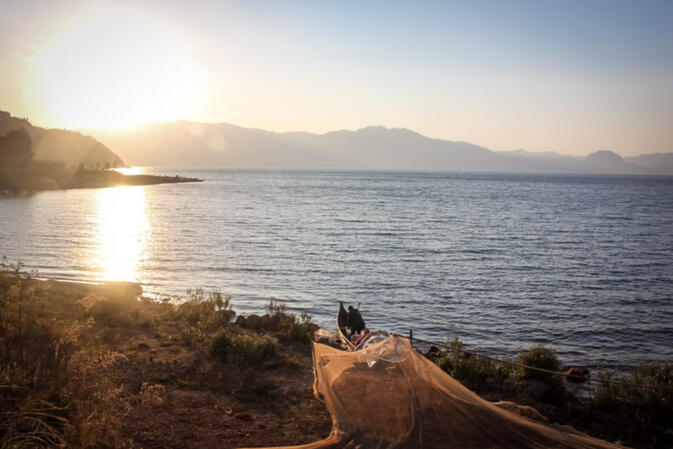 During the night the occasional flashlight strayed onto our tent and we could hear dance music echoing across the lake from the other side. Many fishermen operate on the lake and activity started around 5am, with fisherman walking past, singing radios in tow.

There are buses every 20-30 minutes to Chengjiang leaving from Kunming's South Bus Station. These drop passenger about four kilometers north of the top end of the lake and take approximately one hour. Buses return just as often. 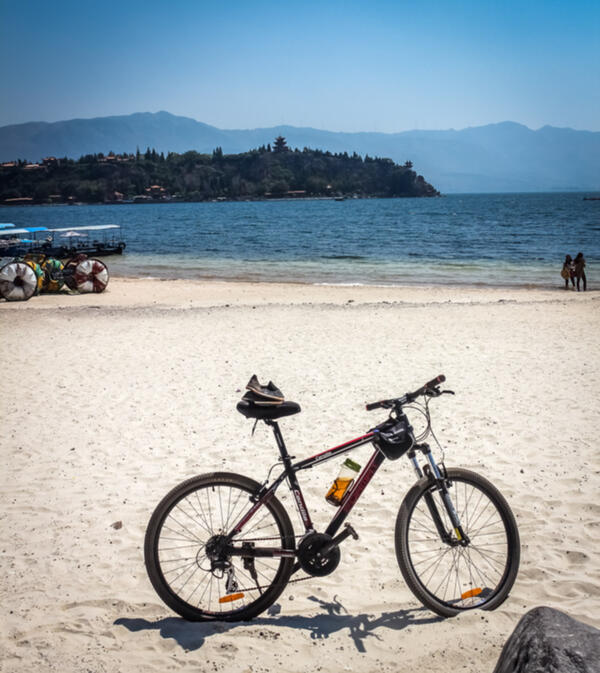 How polluted is the lake? Is it actually safe to eat the food from the lake and swim in it?

By reputation, this is either the cleanest lake in the country, or very near the top.

What is the best part of the lake for making a day trip? Looking for a relatively uncrowded nice stretch of beach to take a group of about 20 students. Proximity to a good restaurant and paddle boat rental a plus. Thanks!

Where Mike4gair keeps his boats is a good location. There is easy parking, and I am pretty sure the pedal boats. It is on the north shore away from the crowded areas, but there are some places to eat not far from there.

You may also be able to arrange some sailing with Mike.

Thanks! Do you know the name of the area?

Great article. Just enough details to get going but not enough to leave imagination behind.