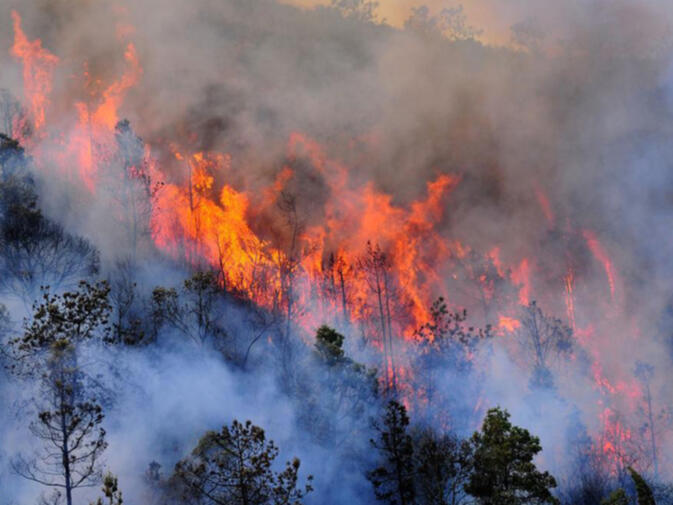 Thus far in 2015, Yunnan has experienced 82 forest fires. While that may not sound encouraging, it represents a 33 percent drop over the same period last year — a fact making officials at the provincial Forest Fire Prevention Headquarters (FFPH) warily optimistic that this spring's fire season may be less intense than the past several.

Some forecasting data appear positive regarding the possibility of fewer fires. 2014 rainfall totals were higher than those of any of the previous five drought-ridden years. In addition, the government has invested large sums in new firefighting equipment and training programs. However, officials at the Yunnan Meteorological Bureau say despite these advantages, the province has entered a "deeply serious fire period".

Across Yunnan, winter has given way to spring, which typically means clear skies, mild temperatures and nearly continuous gusting winds. Such conditions, when coupled with stingy winter rainfall amounts, make March and April prime times for fires every year. And although officials are heartened by the relatively low number of March fires, they remain wary of conditions on the ground.

Because 2014 rainfall totals were higher than at any time in the past half-decade, many forests in the province have already experienced explosive understory growth. Ground cover is particularly vulnerable to fire, as is the copious amount of fallen deadwood caused by several years of drought — making much of Yunnan's timberland extremely susceptible to fast-spreading blazes.

In an effort to predict where conflagrations are most likely to occur, forestry officials and meteorologists are utilizing new satellite imaging systems put into place last year. Since December, 763 areas in Yunnan have been identified as potential wildfire hotspots. Many of these are clustered in the rugged northwest and southeast, with other concentrations in the province's south.

The provincial government has invested 95 million yuan (US$15.3 million) in what is labeled "comprehensive forest fire prevention and control capabilities" over the past three years. Six hundred and sixty-two firefighting teams comprised of 16,000 trained professionals now stand at the ready when wildfires break out. However, Du Yong (杜勇), who oversees forest fire mitigation and prevention for all of Yunnan, believes the upgrades must continue.

"We can not afford to have big fires...The challenge of prevention and control is still difficult, extinguishing [fires] is difficult, and management is difficult," Du told a recently convened disaster management task force. He went on to say that while cities such as Kunming, Chuxiong and Yuxi have all drastically improved their wildfire readiness, in remote mountain areas "preparation remains weak".

The next few days may prove especially taxing to those working at FFPH. Tomb Sweeping Festival this year falls on April 5, and is a time when millions of people across the province will visit the graves of their ancestors — often on heavily forested mountain slopes — to burn incense, paper money and to set off fireworks.

I wonder how much, if any discussion there is in the Yunnan govt about the composition of forests and how that affects forest fires.

Around Kunming and central Yunnan at least, many of the forests are full of non-native eucalyptus trees, which have evolved to encourage fires to squeeze out other species.

I can see why they planted so many of these trees. They grow fast, are highly drought-resistant, and the goats don't seem to eat them, so they were useful for holding the soil in place and mitigating some of the horrible deforestation the province has seen. But it's definitely time to start reintroducing some of Yunnan's native species, which have also adapted to long dry spells, but would hopefully be less of a fire hazard (and also promote the recovery of native plant and animal species).

they also release a chemical in the soil, killing competing plants. In combination with their water-sucking properties, this leads to even more aridity.

What does one do when one spots a forest fire? I saw several starting on my road trip near Lijiang in February, but saw no police station to report it to. Whom do I call?

The hotline for fire is 119, but I'm sure they'll patch you through or send word along if you call general emergency (110) or information (114).

Make sure to note the highway, direction and closest km marker.

I heard that the government had hoped that local farmers could extract eucalyptus oil as a revenue earner and that's why the farmers were helped to plant a lot of these trees.

Eucalyptus is also a good pulpwood, and makes excellent paper.