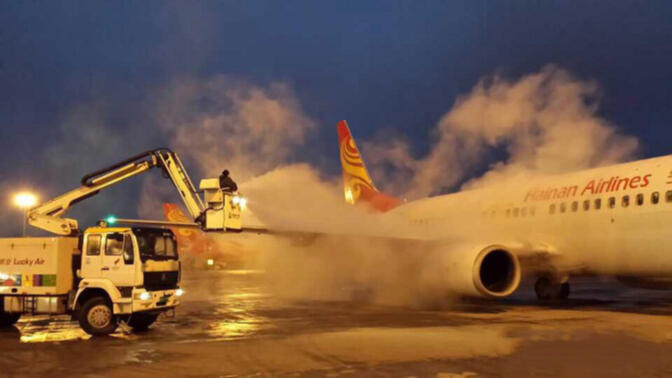 File photo of a plane being de-iced

Winter weather bedeviled China's fourth largest airport over the weekend. As with similar situations from the past few years, thousands of travelers experienced delays, flight cancellations and a general lack of up-to-date information regarding flight status in Kunming. Aboard one airplane, anger and frustration boiled over to the point that passengers attempted to open emergency doors while their aircraft was moving.

China Eastern Airlines flight MU2036 was originally scheduled to depart Kunming Changshui International Airport January 9 for Beijing at 8:45pm. However, due to a combination of cold, fog and snow, the flight was delayed five hours and did not begin boarding until 1:45am.

While passengers stowed their baggage and took their seats, several people noticed a distraught elderly woman complaining of discomfort. Further delayed as the aircraft wings were de-iced, passengers began to complain on the woman's behalf to flight attendants, some demanding to speak with the captain.

At this point, the story becomes a bit confused. The captain apparently addressed the cabin via intercom. What he said is a point of contention, with at least one passenger taking to social media to accuse the captain of going on a profanity-laced tirade so virulent multiple travelers felt compelled to call the police. A spokesperson for China Eastern Airlines has denied the use of any untoward language.

Once the plane began to taxi onto the runway, at least two unidentified passengers — still worried by the condition of the elderly woman and further angered by the pilot's tirade — tried to open three of the plane's emergency exit doors. The aircraft returned to the terminal, where 25 people were taken into custody by airport police.

Two people were eventually arrested, a tour guide from Beijing and a woman surnamed Zhao. Both were charged with "inciting [a] crowd and disturbing public order" and will spend 15 days in a Kunming jail.

Changshui Airport authorities delayed 83 flights on Friday — some for nearly 12 hours — and canceled another 23. Those cancellations and continued cold, foggy weather in turn led to more delays on Saturday and Sunday. Other than the drama on flight MU2036, no near riot situations arose as they did in 2013.

Hope this cleared up by time I arrive, on way to heathrow for flight back in a couple of hours!

A pis*ed off pilot (or co-pilot) on that plane cursing passengers. If thats the case, one can sort of understand the panic there.

One has sort of been wondering here a while, where all this underlying rage and madness will lead, but its still yet to see.

really? watch local tv beatings and stabbings most days. some great roadrage where cars litterally run down ebikes on purpose. how about the farmers who torched the thugs in the land snatch attempt last year just outside kmg.

Just wait until theres a confrontation, on the sea maybe, between East and West, and you need to dig out one of them old Burma Road - way South road - maps from the dusty shelf.

These days a Canadian flag on a backpack wont make a difference.

And that's why I prefer trains...takes longer, but I can stroll around, without being ordered to sit back in my torturous chair squashed between other passengers similarly squished.

Train staff - INFINITELY nicer than most airline staff (Singapore Airlines and that ludicrously expensive Saudi(?) Airline with the exclusive multi-room suite and personal butler who serves nuts in a bowl as opposed to unopened in their original packaging etc, excluded). China's long-haul trains today have smoking lounges (for those so inclined), KTV lounges (for those with Tony Stark budgets and flamboyance), and reasonably comfortable sleepers - without the crowds climbing over you (or vice versa) to get to the bathroom...and at the risk of being sexist - the train's staff are all attractive (handsome men, attractive women), professional, and oh so courteous.

Yep - can't wait for the bullet trains to hub out of Kunming.

Could be the start of another cultural thread - Chinese do not have the habit to properly behave on a plane and lack the skills to properly deal with conflict. Obviously, lack of practice make this phenomena more common.

@Peter: What are you talking about?

What I am talking about. Oh. Next time they use the wrong map overseas for a strike, you dont get away with a Candian flag on a backpack. Over here (there, actually).

Thats should be easy enough to understand. By now.

@Peter: What 'they'? What 'strike'? What does any of this have to do with nationality? It's only about bad flight delays and idiot impatient passengers, Peter.

In fact, freaking out after 7 hours in a plane with 200 other passengers and without fresh air is not impatience in my book.

@bluppfisk: I agree, though that doesn't necessarily mean that it's a good idea. I take back my comment that those who do so are idiotic - 7 hours on an airplane is a long time.

No, its not only about that, Alien. Its also about an angry captain shouting and cursing angrily at angry passengers. (If thats the case, namely).

Its an observation on a freaky detail here. (Then again, if thats the case).

No more questions Alien. Your credit has been used up by now.

The story says that they were supposed to leave at 8:45pm but due to delays did not begin boarding until 1:45am. They were not on the plane for 7 hours.

Still, air-con should be on and left on. A plane quickly gets unbearable without it: it still is a small container with just short of 200 people in it! I've felt very uncomfortable a few times and I believe if I were someone with a little lower tolerance, with no announced prospect of the situation getting better, and denied exit, I would open the doors too.

the aircon has to be turned off for deicing, and the guy who tweeted that the skipper was agressive offensive was given a formal warning about tweeting untruths.

it is in the cnn link which is more upto date