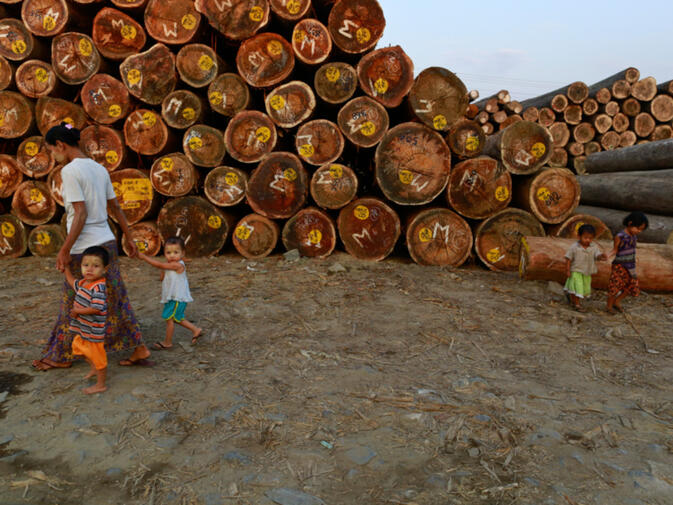 Editor's note: Illegal logging and deforestation are huge problems in Myanmar, primarily due to the seemingly insatiable Chinese appetite for hardwood furniture. The central governments of both countries are not sitting by idly, and have taken appreciable steps over the past few years to tackle such issues.

In Myanmar, timber exports were officially banned in April 2014, while at almost the same time Beijing began to develop a verification system with private sector help that will eventually track and ascertain the legality of timber used in China.

Nevertheless, Burmese wood continues to flow illegally into China, primarily through Yunnan, where the annual trade in illicitly logged trees is conservatively estimated to be worth US$500 million. This situation has led to the near extinction of some hardwood species and is exacerbated by a lengthy and porous border, on-again off-again Burmese civil wars, and a thriving black market where drugs are often substituted for payments in cash.

The most recent example of this highly complex situation came to light on January 6, when Burmese officials raided several logging camps. The following account was originally authored by Thar Nyunt Oo for media outlet Voice of America. It is republished here, unedited and with permission.

More than 100 foreign nationals, believed to be mostly Chinese citizens, have been arrested for illegal logging and other alleged crimes in northern Myanmar, also known as Burma.

On Monday Myanmar military officials said 112 foreign nationals and 20 Myanmar citizens were taken into custody, although it did not specify a date for the arrests. Authorities say they have also seized 436 logging trucks, 14 pickup trucks loaded with logs, stimulant drugs, raw opium and Chinese currency.

Kachin State locals tell VOA's Burmese service most of the detainees are Chinese.

Local Kachin leader, Aung Kham, says the illegal logging could not have happened unless the foreigners had deals with government and ethnic rebel forces.

"The illegal logging have place both at north and south of the Kachin State along the Irrawaddy River," he said. "Most of them are Chinese nationals. They bribe the authorities there to get document allowing logging in the area. They can work here only if they have good relations with all armed forces in the region."

The military says among items seized is a document in which a Kachin rebel officer gives permission for illegal logging in the area.

VOA has been unable to reach officials with the Kachin Independence Army for a response.

The Chinese government has not yet commented on the arrests.

Illegal logging is widely considered a major problem in Myanmar, where ethnic rebel groups have been fighting the government for decades.

Such a crackdown is a good thing.

Any time i drive to and from Dali I always see huge logs on flatbed trucks heading East.
I always knew these were illegal tropicl wood coming from Myanmar.
Why couldnt the police at the toll gates stop them..
It's sickening how the police turn a blind eye.to such situations .

postd with my big thumbs on my phonw.

Mike,
It's more likely that the police are accepting bribes to allow these truck through.

Very good news. Hope it's not just a one-off thing, and that they keep up the enforcement. In my time spent along the Burmese border I've seen countless evidence of this illegal logging. It's about time they do something about it.

On the other front, it's important to also drive home to our Chinese friends that the face they think they gain by buying this furniture isn't worth the cost to the planet.