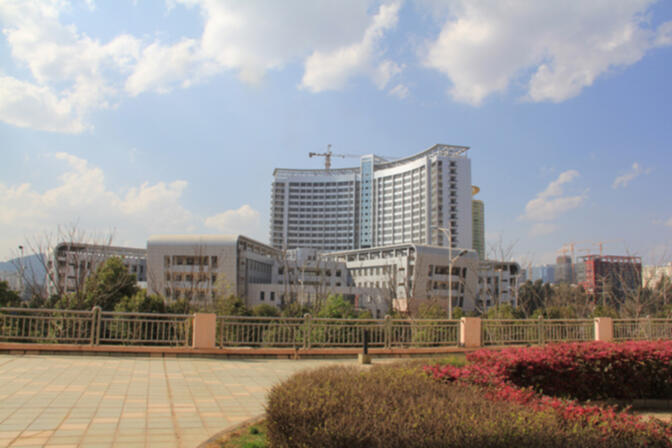 Nearly two years ago, United States-based Sanford Health signaled it wanted to get into the burgeoning field of children's medical services in Kunming. That idea came to fruition earlier this week as the non-profit began a soft opening period at its new pediatric healthcare facility in the city's north.

Curious families brought their kids to visit a staff made up of both foreign and Chinese doctors when the 1,700-square meter center opened October 14. The clinic is made up of 14 exam areas, six treatment rooms, education and training spaces and general use offices that can accommodate up to ten physicians simultaneously, according to a Sanford press release.

Built in collaboration with YMCI Calmette Medical Investment and Management Company — a Chinese state-owned asset — the children's clinic is attached to a much larger, and as yet unfinished, hospital. When complete, Kunming Ganmei International Medical Center (昆明甘美国际医院) will encompass a total of 150,000 square meters and have more than 1,100 beds. It is expected to open all wards early in 2015.

Although the entire facility is owned by Calmette, Sanford will manage day-to-day operations of the pediatric wing. Jim Slack, vice president of Sanford International Clinics told reporters, "This area of Kunming is a perfect fit for our International Clinics initiative. [The] partnership with YMCI Calmette, its work to build a state-of-the-art hospital, and the growing population of Kunming all fit together with what we hope to accomplish."

That hope had been something of a long time in coming. The health service provider was initially approached in 2011 by an ensemble of Kunming investors traveling abroad. The group was headed by doctor Guo Zhiguang, who had worked previously with both Sanford and Calmette. A cooperation agreement between Sanford Health and First People's Hospital was then signed in August of 2012, which eventually lead to the facility opening this week.

The international pediatric clinic is the first of its kind in Kunming, as well as Sanford's first foray into the Chinese healthcare industry. The company, based in Sioux Falls, South Dakota, has previously opened a series of doctor's offices in the African nation of Ghana, but is otherwise concentrated in the US.

Fighting cancer with IT, an interview with Medistar founder Claire Wang

Great! Let's hope it holds up to western standard.

Since it's US-owned, hopefully you don't mean that the standard it will be expected to hold up to would be having one of the worst healthcare systems in the World.

Awesome! Does anyone know how much the visit fees are for a basic child checkup? Do they take international insurance? Any other details on making an appointment (phone number, hours, etc.)?

Number of Belgians in Kunming increases by 150%.

@yankee, the US does not have one of the worst healthcare systems in the world in terms of technology or quality of practitioners.

But it does if you compare it to human health in the USA. High quality doctors and equipment while having poor overall health is a travesty caused by putting money men in charge of health outcomes.

Great, I'll hop on a bus to the "north" and hope I encounter it! Or you know, post the address? is it in the listings yet?

The facility's name in the article is clickable and leads to the listings page:

Thanks. I had searched for "Sanford" and came up empty. Missed the link.

The hospital is partially open, but they don't have all of the equipment needed for some procedures. My wife had to go downtown because they could not do an angioplasty at this location.

I noticed the link above shows the hospital name as Kunming Ganmei International Medical Center, but that doesn't match what's actually shown on the sign at the top of the building.

If you don't know the location, you can find it right across the road from the North Walmart. There are numerous buses or you can take Metro line 2 to LinYuQiao station (1 north of Beichen) and go to exit B.

38th in the world - not good by any standards - 2 points higher then Cuba which has been blockaded for more then 40 years.

HFCampo refers to US health care; in same source China is 141st, I'm rather surprised it's quite that low.