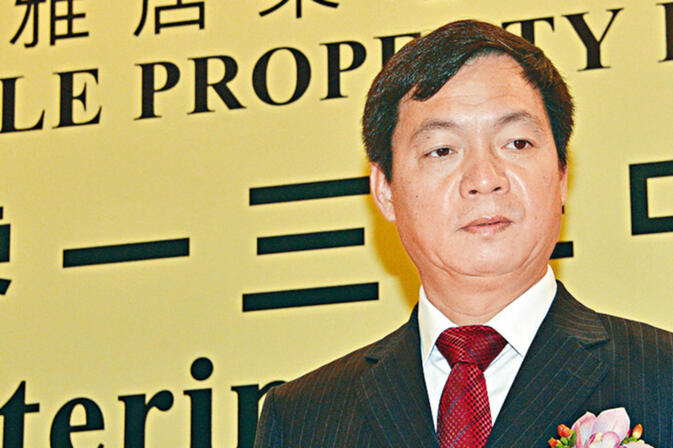 Amidst the disclosure over the weekend that its chief executive officer had been placed under house arrest, shares in Agile Property Holdings dropped 20 percent on Monday. The eighth-largest real estate developer in the country is dealing with the fallout from its alleged business dealings with disgraced Chinese officials, including a former Kunming party secretary.

Chen Zhuolin (陈卓林), the property giant's chairman, was originally taken into custody under orders issued September 30 by the Kunming People's Procuratorate. Although most of Agile's land holdings are concentrated in Guangdong province, Chen is thought to have been involved in unlawful business deals centering on his company's aggressive expansion into the Yunnan real estate market.

Online financial magazine Caixin has linked Chen to Zhang Tianxin (张田欣), communist party chief of Kunming from 2011 until he was removed from office under suspicion of corruption in July 2014. No financial details have been made public but authorities are said to be investigating Agile's huge development projects in Dali, Kunming, Lijiang, Ruili, Tengchong, Xishuangbanna and Yuxi.

Agile first began moving into Yunnan in 2011, and two years later announced plans for a 20,000 hectare project in Tengchong called Yunnan Hometown (雅居乐云南原乡). The themed resort was expected to exploit the area's hot springs and provide luxury accommodations as well as an 18-hole golf course — all with an expected price tag of 20 billion yuan (US$3.72 billion). In total, Agile's seven existing Yunnan investments run to at least 60 billion yuan (US$9.8 billion).

Forbes has also linked the 52 year-old Chen to Zhou Yongkang (周永康), once China's highest ranking security officer who is currently under investigation for cronyism and graft. Agile's problems, however, do not end with its CEO. Several unnamed "Yunnan-based executives" employed by the company have also reportedly been arrested, and ratings agency Moody's just downgraded the two-billion dollar company to a double B-minus — a grade equivalent to one commonly given to junk bonds.

Although Chen was not involved in Yunnan's governmental bureaucracy, he is the most recent high-profile casualty to be swept up in provincial corruption probes. Wen Qingliang (闻清良), former head of the Kunming Railway Bureau, narrowly escaped the death penalty just weeks ago following his conviction for accepting bribes and Bai Enpei (白恩培), provincial Party Secretary from 2001 to 2011, has been under investigation since September. Before those cases came to light, vice governor Chen Peiping (沈培平) was found guilty of graft while former Kunming Party Secretary Kong Chuizhu (孔垂柱) reportedly committed suicide while in custody and under investigation.

Learn to code with Le Wagon Chengdu, then get an internship at GoKunming

Good to know they got these guys, but I hope they're not just pickin & choosin.