January 12, 2021 "A qualified German teacher is required to teach a young learner once or twice a week. English classes also available if experienced and qualified. …"
Living in Kunming 12345 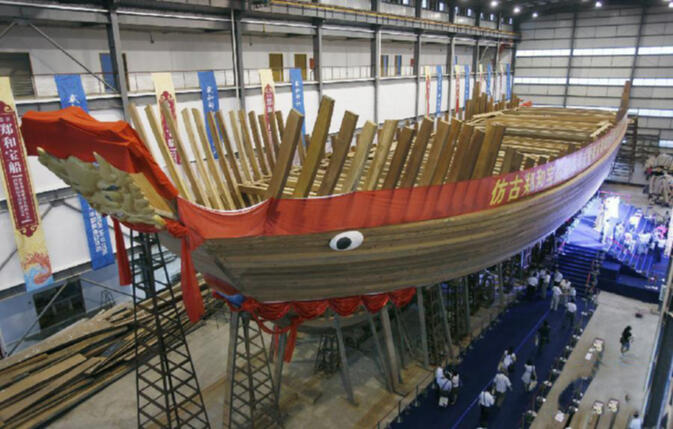 More than six hundred years ago, the imperial Ming court did something unparalleled in Chinese history — it ordered the building of an enormous fleet of ocean-going vessels with the purpose of exploring the world. In 2005, investors in Nanjing set out to recreate one of the largest of these ships. It now appears the attempt to resurrect historical glory may never come to pass as work on the wooden 'treasure ship' has stalled completely and, according to a China Daily account, may never reach completion.

Almost a decade ago, Nanjing Junlong Treasure Ship Properties was established with the express purpose of raising funds to construct a 71-meter wooden replica of one of the ships — known as baochuan (宝船) in Chinese — sailing under the command of Admiral Zheng He (郑和), a Yunnan native, in the fifteenth century. The company initially raised ten million dollars and announced the vessel would be sea-worthy in time for the 2008 Beijing Summer Olympics.

That date passed with work on the ship unfinished, as did another deadline set by the company for 2012. The most recent prediction was that the ship would be ready for its maiden voyage this year and coincide with the opening ceremony of the Second Youth Olympic Games to be held in Nanjing in August. Shipbuilders working on the project now say they cannot reach that target date either.

Depending on who is giving an account of construction woes, the current delay is a scheduled pause, a workers' strike or a case of financial inadequacy. Head of Junlong Properties, Bian Guanghong, told the China Daily:

Though the construction of the hull has been suspended, we are ordering some equipment to install inside the replica. The craftsmen on the project, who have mastered traditional Chinese shipbuilding techniques and came from Fujian province to help us build the ship, are old and need to have a break this summer. That's the reason for the suspension.

A statue of Zheng He in his birthplace in Yunnan, Jinning

Workers and contractors, however, tell a different story. A spokesman for the company hired to design the ship claims his company is owed 1.3 million yuan (US$209,300) in back pay, while a shipbuilder says the company has run out of money for salaries, leading to a work stoppage.

Regardless of who or what is causing the almost comical delays — Zheng He's fleet of 317 ships was built in only two years — it appears the replica may never set sail on any of the admiral's voyages as planned. The seven original expeditions by Zheng He were undertaken between 1405 and 1433 and the Nanjing consortium had hoped to retrace parts of these with their modern-day recreation.

During the course of his voyages, Zheng He visited the shores of some 37 modern nations, made a pilgrimage to Mecca and traded in port cities on the horn of Africa. Scholars have referred to the armada as one of the largest flotillas assembled in the history of mankind, employing 28,000 sailors and crew members.

The treasure ships themselves are a topic of spirited debate as some nautical historians maintain their immense size — by Chinese court accounts 137 meters long and 55 meters wide — would have been an engineering impossibility 600 years ago. Simply building a scaled-down version is proving difficult in Nanjing, and the ghost of Yunnan's most famous son may not sail any time soon.

Sounds like a typical construction project here in China, why the surprise lol Though saying that it's definitely a comical project!

Typical would be if they built it in half the time, set sail on it, then it fell apart half a year later after they found out the beams were hollow, the sails made of paper and the hull wood was actually hollowed concrete made to look like wood!

Maybe the problem here is they want to make it high quality and aren't quite sure how to go about doing so!

And 137m ships made of wood coming from anywhere is a structural impossibility, I believe, without steel/iron/carbon fibre support or some very cunning way to fit very long beams of wood together where they hold their strength. And is it just luck that this happens to be the same length as Noah's Ark? If they did make them that long, likely they wouldn't have survived even minor swells, let alone going halfway around the world in uncertain weather...

Should read "Typical construction takes about 1/4 of the time here than in the West!", ahh well its late, clearly need bed.

Thumbs up to blobbles. Built half the time, set sail, fell apart shortly after due to bad quality materials.

Noah's ark was the same size?

Anyways, as for "structural impossibility" are you sure about that? Zheng He was during the mid-late Ming dynasty. During that time they had cannons, broadswords, armor, etc. It wasn't necessarily a stone age era. I'm sure they used some sort of metallic material to help create the "bones" of the ship or even as a fastener. Also, it's hard to make the argument that "wood that big doesn't exist" when we have Redwoods in California that are the largest trees in the world.

Also, I agree I don't think they could survive swells. Zhang He was a Yunnan native. He wasn't born on the sea. Most shipbuilding of immense size prior to the time was for river barges. I can't specifically state that the Chinese had no knowledge of ocean travel since there's stories during the Qin dynasty of the "mad" emperor that sent ships to the "heavenly land" to find the fountain of youth (Japan).

As for my short statement about japan in the previous post, what I vaguely remember about their history is that they existed and had issues with the natives. Their leadership system was setup with an emperor and his warrior subjects. Those that fought for him would earn land as payment for services. From what I know about Japanese history, which its very vague, is that this system lasted for years all the way up through the 1500s.

This discussion and the impossibility argument is obsolete. I was in Nanjing at the Zheng He museum, the site where the star fleet was built. They did recently find the rudder of one of the main ships and it is gigantic, it does indeed confirm the reported dimensions of the ship, being several times bigger than chinese caravels of the time. Notice: the vietnamese and other islanders natives from what is today the Philippines were the true pioneers of shipbuilding, from which the chinese learned how to construct their ships.