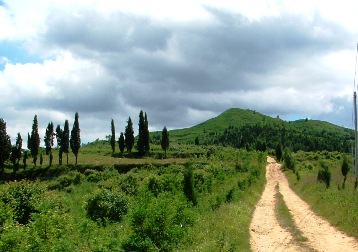 This weekend, tired of being sidelined by the recent rainy weather and getting stir crazy from too much time in the city, we mounted our Kunming-bought mountain bike with a most difficult objective: to get out of the city - and its sprawl.

Filled with optimism, we headed northwest on the Kunrui Highway from the Xizhan Flyover toward the mountains which are home to Kunming's famous Bamboo Temple (筇竹寺, qiongzhu si). After about twenty minutes of riding through dusty urban chaos, we reached the bottom of the hills we were going to ascend in our search for a relatively chill place to bike.

The road to the Bamboo Temple is a mix of occasionally steep switchbacks and dips in between mountain ridges. A rider of average health should be able to make it to from the base of the mountains to the temple within a half hour.

While heading upward there are two things worth bearing in mind: weather and traffic. Weather in the hills changes quickly, so it is advisable to prepare for a variety of conditions from intense heat and sun to cold, windy rain. Traffic is generally bearable for anyone accustomed to riding in the city, but even the most patient of riders is likely to get tired of the large FAW trucks that blast ear-splitting warnings from their horns and fart black plumes of smoke toward the road's right shoulder. 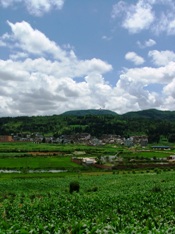 Having reached the Bamboo Temple with no relief from traffic in sight, we took a spontaneous detour toward Qipan Shan (棋盘山), whose name means "Chessboard Mountain" for a reason we have yet to discover. The road to Qipan Shan quickly became a one-lane (two-directional) bumpy country road. It also became much steeper.

After another 15 minutes of huffing and puffing, we came across a flat, green valley (the chessboard, perhaps?), which was covered with corn and also had a small village. There were more hills on the other side - including one with an interesting-looking temple - but we wanted to see if this road would lead back into Kunming near Dianchi.

Slowly the number of cars had thinned out to zero. Every few minutes there'd be a carful of people stopping on the road to pick fruit or just enjoy the clean mountain air, but for the most part we had achieved our goal of finding a genuinely tranquil spot just outside the city. 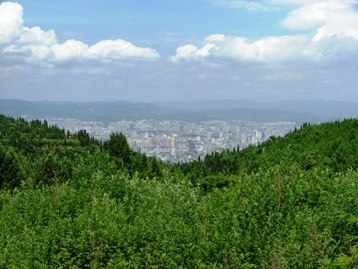 After stumbling across one of the best views of Kunming we've found so far, we continued on to the next village, where residents told us that the only way back to the city was the road that we had ridden into town. We thanked the slightly bewildered locals as we prepared to coast back down to Kunming.