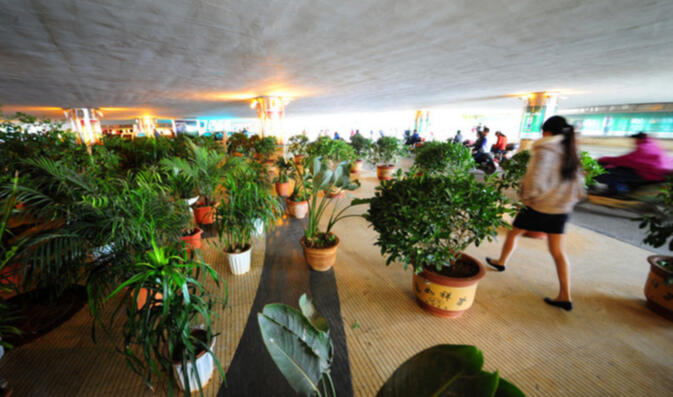 More and more it appears Kunming streets and sidewalks are becoming the domain of unregistered vendors who sell all manner of things from mats and tables on the pavement. In the past, many seemingly half-hearted attempts have been made to restrict such behavior, especially in places where vendors block traffic.

None of the initiatives have proved particularly successful. However, a new strategy was unveiled early on the morning of March 25, when city planners decided to simply eliminate some empty pedestrian space. Local news outlets have dubbed the tactic 'Plants vs Zombies' (植物大战僵尸), a reference to the incredibly popular video game of the same name.

Commuters and pedestrians walking through the intersection of Dongfeng Xi Lu and Renmin Zhong Lu on Tuesday may have noticed the area was a bit more green than normal. Overnight, workers installed more than 500 large potted plants on sidewalks near the popular shopping destination Xiaoximen (小西门) in an attempt to discourage curbside hawkers.

The intersection where the plant blockade was deployed is known by locals as the 'turtleback flyover' (龟背立交桥). Built suddenly in 2008, the overpass was designed as a means to separate vehicular and pedestrian traffic, with cars and buses passing over an area designed for bicycles and those on foot. For roughly two years an ever-growing number of slap-dash, unlicensed merchants have descended on the covered walkway. Somewhat ironically, their arrival has made the intersection one of the busiest and most congested areas in Kunming's downtown area during the evenings. 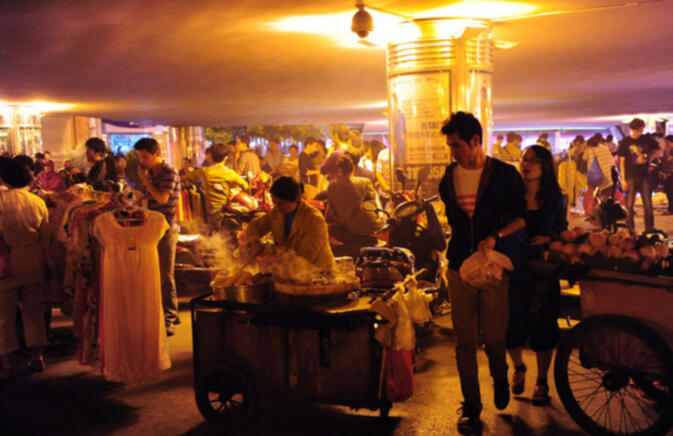 The plants were put in place by workers from a local business called Daguan Properties Limited, which is also tasked with upkeep of the greenery. A spokesman for the company, Liu Yiqing (刘翼青), said the plants serve the dual purpose of blocking space often used by vendors while also beautifying a usually drab area. "This is the first time we've tried a move like this to deal with street vendors. We hope citizens will support it and protect the plants," Liu said.

Unmentioned by Liu, but alluded to by local reporters covering the story, is the idea that plants may be significantly less violent and boisterous than the people usually assigned to prevent streetside hawking. Kunming's urban management officers — or chengguan (城管) — are charged with keeping city streets free of unlicensed commerce, among other duties. Over the years they have developed a bit of a nasty reputation as bullies who target only the weakest and least connected vendors.

In March 2010, frustrated vendors and residents of Kunming's Wuhua District clashed with a number of chengguan officials. The incident culminated in a police car being overturned and set ablaze. Only a month later, other officers were accused of backing their car over a deaf man whose house they had just demolished and then dragging him 50 meters. The list goes on. Now, at one busy Spring City intersection at least, these agents have been supplanted.

And so the cabbages have been replaced by flowers?

A+ for title and "supplanted" pun in last line.

I wonder if any of the problems that have to do with unlicenced vendors etc. might have something to do with a (relative) downturn in an economy, a lack of well-paying jobs for those with few formal qualifications, and an increasingly unequitable socio-economic system?

'Urban management officers replaced by plants'. Promotion for some and redundancy for others?

How will I find the vendor that sold plants now!$@#&!

I like the vendors. They are useful to me. They need the money, too. If I wanted to buy everything from a few monopoly corporations, I'd've stayed in the US.

Of course everybody needs money but the vendors can sometimes be very detrimental to the people who play by the rules and they don't seem to care. The individual shops around xiao xi men and wen hua xiang that pay exorbitant rent to be where they are can suffer greatly from the vendors that put a table directly in front of their door and sell similar goods for cut-throat rates. Those shops are not monopoly corporations and as legal tenants and taxpayers they deserve to be protected from illegal commerce on their doorsteps that threaten to put them out of business.

For some odd reason there seems to be abundant support for illegal vendors that set up shop wherever they please. Some calling them 'charming' etc. but is it really logical to just let this grow in whatever way it feels like to whatever size with zero regulation and zero consideration for the neighborhoods that they decide to take over? Whoever feels like setting up a little shop wherever they want should be allowed to do whatever they want just because they feel like selling stuff on street? Really?

Regulating the vendors in a way that is less detrimental to the neighborhoods and business areas that they occupy is obviously a good idea. Finding a place for them to exist legally without having such a direct impact on nearby legal businesses (i.e. directly on their doorsteps) is an even better idea.

Yes, illegal street vendors on the street are hurting business because they are allowed to be there by corrupt chengguan. Business has trouble to keep up because of high rent.

Why is rent at wenhuaxiang so high though? Because it's all owned by a happy few who probably have earned their money in equally questionable ways.

So businesses are fucked two-ways by corruption. They really ought to move elsewhere and allow the sores to fester.

Agree with blupfisk and quixing's post when the vendors dont give a shit about traffic or businesses.

Vendors should be somewhat discreet and respect competing businesses or else wham o...

On another note...
As we see the economy slow down in addition to ever increasing rent and vendor mayhem it will eventually reach a breaking point, blowing up in China's face BIG Time.
I like the attitude of "the BOX" owner whom just shut down business..
Hey Sal, wherever you move I'll still go there....

It began in Ningbo, soon it will be the rest of china's "unrealestate" massive sell off...

I'm all for allowing street vendors to do business, for allowing different levels of the economy to flourish. But these Xiaoximen vendors have gotten way out of hand. The traffic jams radiating out of Xiaoximen have just gotten ridiculous. It used to be on a bicycle I could weave my way around any traffic jam, but I recently spent ten minutes on Renmin Road approaching Xiaoximen from the west, in pure gridlock. Even the pedestrians were in gridlock. I'd never seen anything like it.

"What happens when they decide to set up shop in front of YOUR house blocking you from getting in and start taking money out of YOUR pockets?"

I'd love to buy jianbing or baozi as I walk to early class. I'd put my money in their pockets willingly.

I've bought food from one woman vendor for ten years now, and somehow the sky has not fallen.

"The traffic jams radiating out of Xiaoximen have just gotten ridiculous.'

Your problem is caused by cars, not people selling me erkuai.

"I wonder if any of the problems that have to do with unlicenced vendors etc. might have something to do with a (relative) downturn in an economy"

There are far fewer small markets than there used to be.

I think this is more likely to be the trickle down effect, as more people at the lower end of the econmomic scale have disposable income now. The lower end of the vendors market will grow, and as these people get richer they will go up-market little by little.

@KuiXing has many excellent points. Where I live, the vendors have gotten out of control too. There needs to be a designated area for vendors. I'm all for entrepreneurship but there have to be rules otherwise it is chaos.

Yep, there definitely needs to be rules, or at least the enforcement of existing rules.