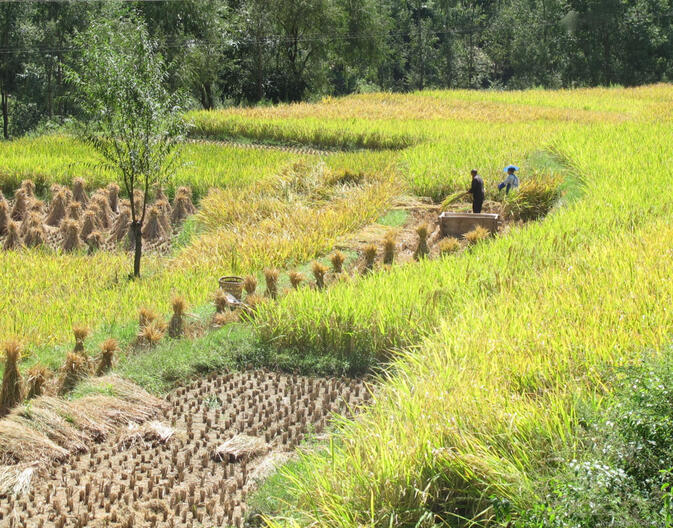 Editor's note: Two years ago the number of people living in China's urban areas surpassed its rural population for the first time. That still means more than 600 million people live in the countryside today and many, if not most, earn their living through grueling agricultural labor. Corlie Mortimer is working to ease the burden of work for a few families in neighboring Guizhou province by raising money for a rice thresher — a simple and inexpensive machine that can save hundreds of hours of intense manual labor come harvest season.

There is a popular poster seen quite frequently around Yunnan, it depicts farmers working in a rice field, with drops of their sweat falling down into a rice bowl — a drop of sweat for each grain of rice harvested. The poster encourages people to be grateful for the hard work that brings the staple food of China to their bowls.

Almost all farming here is done entirely by hand — ploughing the fields with water buffaloes, preparing the fields by digging holes for the crops and adding compost to each hole, transplanting the seedlings, harvesting the crop by hand and carrying it out of the fields in baskets as big as the person that carries it. Local villagers are very aware of the hardship that brings them their food. 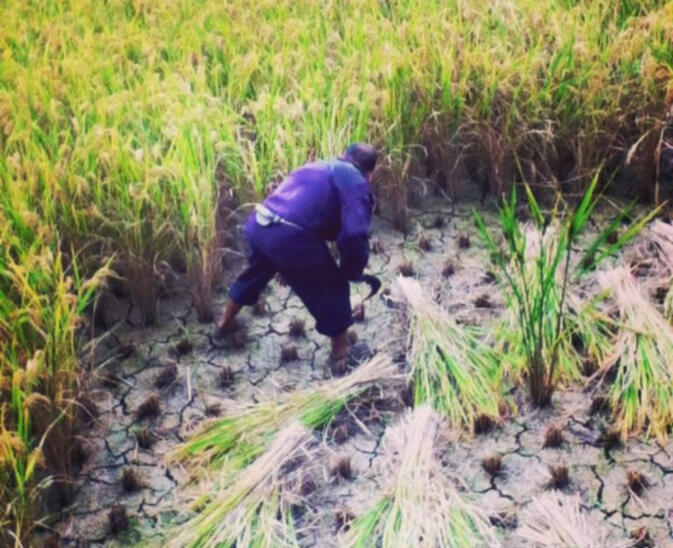 Unfortunately, because of China's immensity and the remoteness of some of the areas where this backbreaking farming is done, gratitude is often the only form of help the laborers receive. Saving money for mechanical farming equipment is a near impossibility for the average rural family. Whilst many local children leave the villages to find work in cities to help support their families financially, the older generations are left in the villages to continue the actual farming work.

This makes their plight even more touching as the fields are filled with a generation of people that would, in other cultures, have been peacefully retired at their age. Perhaps the most intense part of farming rice by hand comes during harvest season. At that time, villagers young and old head to the fields to cut down rice stalks, gather them into bunches and then thresh the grain from the chaff by repeatedly beating the bunched stalks against the sides of a giant wooden box. 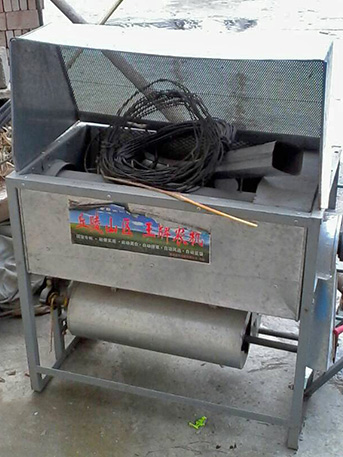 A little village at the end of a dead end road in Guizhou province is facing this situation and has caught my heart. My husband and I, along with scores of international rock climbers, go to Getu He Village (格凸河村) to climb the spectacular walls of its Great Arch Cave.

As we have been back and forth to the village about six or seven times now, we have come to know many of the people who live there and their plight has touched me deeply. After speaking to one of the better-off villagers, Wu Huilan, who runs the Petzl Guesthouse, we started the Getu He Village rice thresher fundraising project.

After a bit of investigation, we found that one mechanical rice thresher would lighten the workload of about four households, as a centrally placed threshing machine could be used by people working four or five fields alongside each other in the paddies. These machines cost about 2,000 yuan, which is less than US$350.

In essence, this project aims to raise funds to buy a few mechanical rice threshing machines for this little village. Although a few of the machines are used during the harvest, they are not nearly numerous enough for everyone to use. However many machines we can purchase will be rotated through the village fields so that as many people as possible can benefit from their use.

Once we have enough funds, Wu Huilan, the village leader, and we will go to a nearby town and purchase threshers. we encourage everyone to step up to the challenge of providing Getu He Village with at least two threshing machines for their next harvest season, which begins in August.

Donations for the Getu He Village threshing machine fundraiser can be made directly online by clicking this link, scrolling to the bottom of the page and finding the Paypal icon. Alternately, you can purchase a beautiful hand-woven scarf made by Miao artisans from the village. For every scarf sold, Red Buffalo Trading will donate US$25 toward purchasing automated threshers before harvesting begins late this summer. Donations can also be made in person at Salvador's Coffee House.

So far, we have raised almost enough money to purchase one threshing machine. Once we reach that goal, or hopefully exceed it, we will post an update in this article, including photos of the newly bought machines. In an effort to be as transparent as possible, all donations received through Paypal are publicly acknowledged on the Red Buffalo Trading blog and frequent updates will be made regarding the fundraiser's progress. 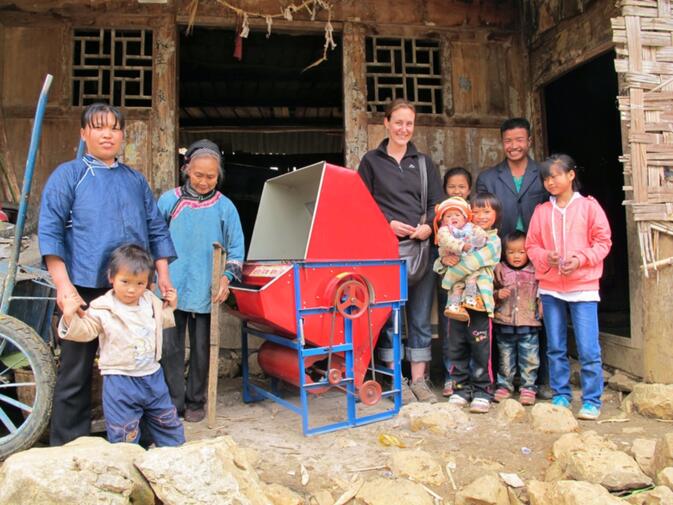 Success! Two rice threshing machines have been bought with donations and delivered to villagers in Getu. The fundraiser is ongoing and now attempting to purchase a total of five threshing machines, enough that all families in the valley could benefit from their use. Thank you to everyone who helped out!

Seems like a decent idea - anybody know these people?

Is the thresher expensive to operate? Does it need a lot of gasoline or electricity to run?

Is there a place that directly sells the hand-woven scarves? Preferably somewhere where all of the purchasing money and the profit would directly go to the artisans benefit without intermediary.

@lesterness I'm not sure I'll check next time I go, the villagers didn't say anything about that when we came up with this plan and I didn't think to ask.
@NickyH I'll check it out tomorrow, but I got some donations in two days ago so not sure what changed..
@yankeeOO I don't get any profit from this venture. The women who weave the scarves get $32 for making the scarves $3 is for the postage to Kunming and $25 goes to the threshing project.

@NickyH I just checked the PayPal link in this post, it isn't working. Try going to the site directly, redbuffalotrading.com and scroll to the bottom to see thenoaypal donation button. Thanks for trying!

Hi Corlie, sorry but no paypal donation button is displaying at the bottom of the RB home page (I'm using Safari), and searching the site for Donations doesn't produce anything either. 怎么办啊？

@NickyH if you go the the blogsite homepage it's just under the about me section, sorry it should've been blog.redbuffalotrading.com !

Paypal's code and GoKunming's do not get along very well. The donation link above has been fixed and instructions added. My mistake.

@Alien, I've just asked Colin from Salvadors if I can put a donation box there, so from tomorrow (Friday) lunchtime there will be a box at Salvadors for anyone who wishes to give cash to the project. Any amount will be welcome!

Can I ask that people who want to stay updated with the progress after they've donated send me an email so I can add them to the project's mailing list?

It's odd the central gov. in china doesn't fund such simple machinery to increase productivity...

too small to slice off the top?

Whoop whoop!!! We've got 2000 RMB!!! Thanks to all the contributors!! Soon we'll go to Getu to buy a thresher :) hope to buy one more by harvest season in August so please keep spreading the post :)

During tomb sweeping weekend (April 5th) we went to Getu and managed to get the village 2 rice threshers with the 2000RMB we raised.
They said if they had 3 or 4 more machines they would have enough for the entire village to be free of having to thresh by hand.
I have just gone to fetch and empty the pot that was up at Salvadors, and with those contributions and others that came in we are already at 443RMB towards more threshers. Thank you to everyone who is helping! Let's keep going and make a difference to this village!

During the national holiday of October 2014 we again went to Getu village and delivered two more threshers, with the funds raised since I last wrote. We have now donated a total of 4 machines to the village.

Brilliant. Well done to all the team.