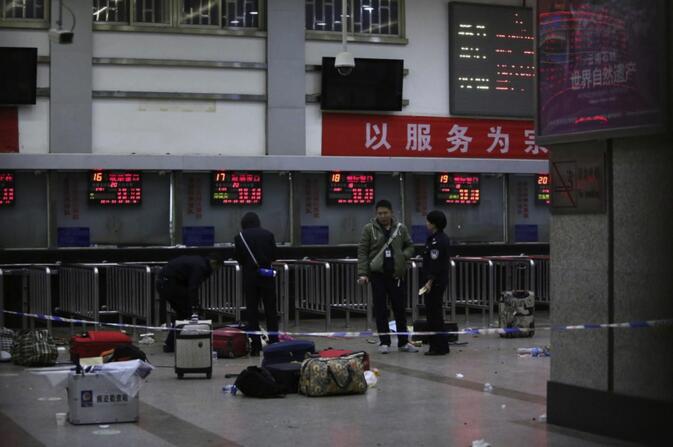 As people across China attempt to come to terms with the deadly knife attack on civilians at Kunming's train station, details of the tragedy are beginning to come to light. Although no clear motive has been announced, high-ranking officials have given statements detailing some actions of the group responsible for the assault. More importantly, many of those injured at the station are reported to be convalescing in local hospitals.

The attack on the night of March 1 left 33 dead, including four of the assailants. Many people who survived the onslaught suffered serious injuries and were sent to hospital emergency rooms across Kunming. At least 143 people have been treated for wounds inflicted during the knife attacks.

All told, 29 doctors specializing in different fields of surgery have performed 104 emergency operations on victims of the attacks. Five of the specialists are from Kunming, while other doctors from around the country have arrived to assist them, China Daily is reporting. The great majority of people wounded at the train station have been moved to recovery wards but 20 patients remain in critical condition.

In addition to treating physical wounds, hospital staff and government health officials have arranged mental health professionals to be available for on-call counseling to the bereaved or maimed. Many people who were caught up in the attacks are reporting memory loss or otherwise showing signs of post-traumatic stress disorder. Thirty mental health practitioners from the Yunnan Provincial Psychological Society are now assisting those in need of counseling or therapy. The Chinese Red Cross has also opened a call-in hotline for those seeking assistance, which is open from 9am to 9pm daily.

Little is known about the men and women who carried out the train station assault, although Chinese micro-blogging sites are rife with speculation. Pictures of four men and one young woman who allegedly took part in the attacks, purportedly taken by Kunming police, have been circulated most widely.

State media has so far released precious few details of the attackers. The group is believed to have been comprised of six men and two women all hailing from Xinjiang Autonomous Region. They traveled together while attempting to leave China, and, in the words of Yunnan Party Secretary Qin Guangrong, "to join jihad".

Qin also told reporters the attackers first tried to exit the country from a border crossing in Yunnan's southern Honghe Prefecture. When this attempt failed, they next traveled to Guangdong, apparently wanting to cross into Hong Kong. Again their efforts failed. It was then that the eight people reportedly returned to Yunnan and then eventually carried out the March 1 attack.

No concrete motive for the train station assault has been substantiated. However, a laundry list of hypotheses (requires proxy) have been put forward, among them, retaliation for cultural oppression, religious persecution, and revenge killings.

Perhaps surprisingly, the Kunming train station was open for business just hours after the attack. Sunday, the day following the massacre, saw nearly 60,000 people board or disembark trains, a number just above average daily traffic. Mourners also continue to lay memorial wreaths and flowers at the foot of a giant statue of a bull outside the station and an official memorial service was held in Kunming on Tuesday night.

Online reaction has been diverse. The South China Morning Post reports netizens are engaged in fierce debate over what China's reaction should be. Many are also urging restraint and calm. Xu Xin, a prominent legal scholar with six million Weixin followers wrote on his blog:

Inciting ethnic hate is exactly what terrorists aim to do. Instead of igniting more hatred, we ought to reflect on what generates terrorism in order to more effectively contain it.

Top members of the Chinese government have also weighed in on the tragedy as they meet at the Twelfth National People's Congress. Most notable among them was Chinese Premier Li Keqiang, who offered his condolences to those killed and injured in the attacks before vowing China would crack down on terrorism.

Just as police and firefighters were lionized for their efforts following the September 11, 2001 attacks in New York City, some of those who responded to the scene of the Kunming stabbings are now becoming celebrities. The Kunming SWAT team member who reportedly shot and killed four of the train station attackers in 15 seconds has been interviewed extensively about his experiences. He has been given the moniker Zhang Jun by the Chinese media, a pseudonym used to protect his anonymity.

The article from the UK Telegraph that refers to the perpetrators "attempting to leave China to join jihad" states that the Chinese website that quoted these comments from Qin later deleted them. What would that mean, that the authorities are backpedalling from that theory? Or want to suppress it? Or that it was too unsubstantiated?