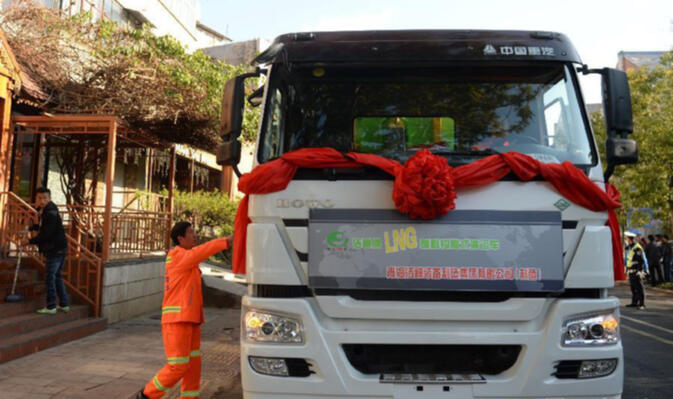 Everyday, 1,300 garbage trucks ply the streets and alleyways of the Spring City collecting refuse created the day before. Many of the vehicles feature old, diesel-powered engines that have seen almost as many overhauls as they have dumpsters. Four new vehicles were added to the fleet this weekend, inaugurating a green program city officials hope will help reduce pollution caused by municipal vehicles.

The four trucks are powered by liquefied natural gas (LNG), an alternative to gasoline being tested by several city governments throughout China. Although media reports have not specified what type of gas the Kunming trash trucks are utilizing, LNG is normally composed largely of methane.

Later this month, six more LNG trucks will join the four put into service on Sunday. Officials from the Department of Sanitation will monitor the performance of each vehicle, paying special attention to fuel use, carrying capacity and maintenance costs. If the new trucks fulfill manufacturer's claims, the city will reportedly move to replace its existing fleet of garbage trucks by 2017.

Those claims include enormous reductions in the carbon emissions expelled by the city's garbage vehicles. According to statistics announced by the Department of Sanitation, if all 1,300 of the current trash trucks were replaced by those burning LNG, 11,000 tons of diesel fuel oil would be saved annually.

This would eliminate and estimated 97 percent of the carbon dioxide now being emitted by city garbage trucks and reduce overall tailpipe emissions by 3.7 tons per year. How much of an effect this would have on the city's Air Quality Index is unclear as total vehicle emissions estimates are unreported.

Each of the LNG trucks cost 700,000 yuan but Kunming was able to secure a price of 400,000 per vehicle by buying ten at once. In addition to getting a discount, officials expect to save 30 percent on annual fuel costs each time they replace a diesel truck with an LNG one.

The LNG trucks will only be operating in Kunming's Wuhua district until more are added later this year. They join the growing number of hybrid taxis driving around the city, as well as dozens of LNG public buses that have been introduced since 2012.

So they buy a few LNG run trucks and build a refinery at the same time, seems an unusual way to clean up the city's air.