Getting Away: Thousand Lion Mountain 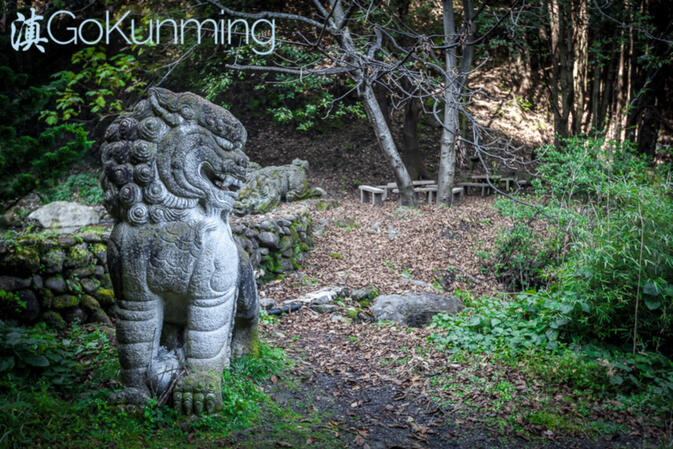 On a recent trip to Jianchuan Old Town, we found ourselves looking northwest of the city at what appeared to be a pristine mountain draped in green forest. When we asked locals if the peak was worth a visit, they excitedly told us it was home to a sprawling but seldom visited tourist attraction — one opened following a boom in provincial tourism.

Cities around Yunnan slowly began to realize their travel destination potential nearly two decades ago. Many followed in the footsteps of Lijiang, which had been rebuilt following a devastating earthquake, and Dali, which was then establishing itself as something of a backpacker haven. 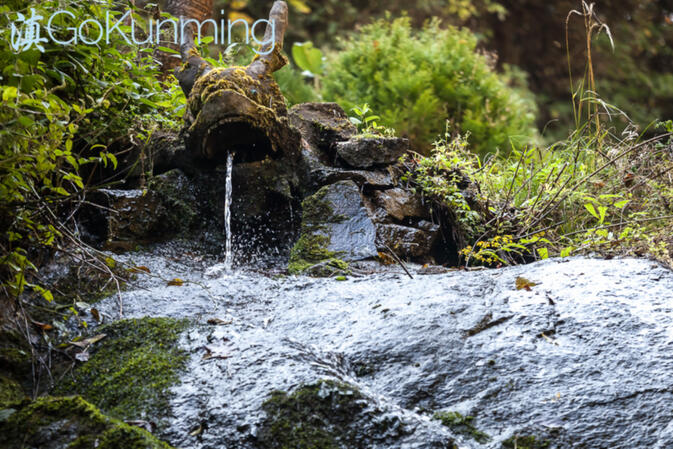 This emulation often had mixed success. Jianchuan's government commissioned what would become a ten-year project aimed at bringing travelers to the area. The tourists did come, but not to Jianchuan. Instead they flocked to nearby Shaxi and its charming old town.

That left Thousand Lion Mountain (千狮山) — the place we had spied from town — lonely and largely unknown to tourists. Today it's slopes are mainly visited by small groups of locals looking for a bit of quiet exercise. With the opening of a new highway to Jianchuan though, people expect foot traffic on the mountain to pick up soon. 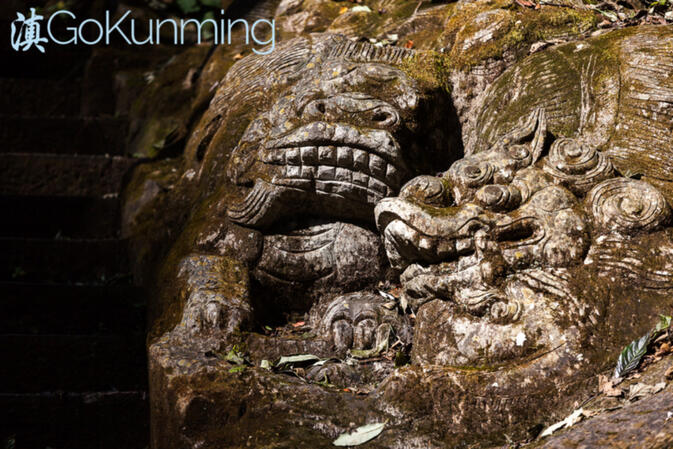 In 1996 the Jianchuan government decided to give the mountain something of a facelift. What had previously been a park with dirt tracks for paths was lavished with money. Local artist Chen Yongfa (陈永发) was hired to design one thousand statues to be carved from the rocks of the mountain. Eventually, Chen designed more than 3,200 friezes and sculptures, all of them in the likeness of lions.

Local stonemasons worked for ten years on the lions and as they did, a permanent brick path was installed and a visitor's center constructed. Work concluded for good in 2006 when a gigantic lion statue was completed near the top of the mountain gazing out over the valley below. 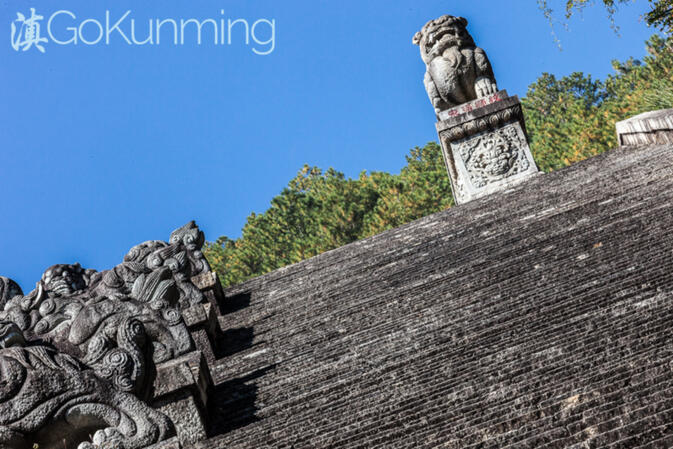 The park entrance is a testament to the scale of the project's ambition. A sprawling parking lot fronts a massive set of stone stairs so steep it is difficult to see what lies at the top. The steps are decorated with intricately detailed stonework and lead to a plaza where visitors can rest for a bit before tackling what is to come.

The first stairway, impressive enough in its own right, is only a small taste of those to come. In all, the second set of stairs number an auspicious and breathtaking 999 steps — or the rough equivalent of climbing to the top of a 45-story building. 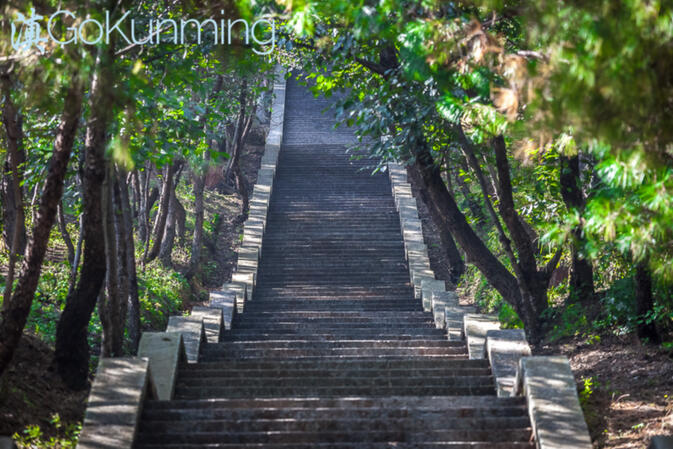 The stairway leads to a modest gate and a structure most likely designed to be a teahouse where people can rest their weary legs. It now sits empty, surrounded by pine trees and ever-present lion statues. The path wends its way through the woods, slowly gaining elevation until is comes upon a pond with lions playing in the water.

From here the stream feeding the pool becomes the constant companion of the pathway. It flows past an immense boulder emblazoned with characters extolling the area's calm and placid atmosphere and ingeniously carved gutters adorned with yet more lions guide the stream first beside and then under the bricks of the path. 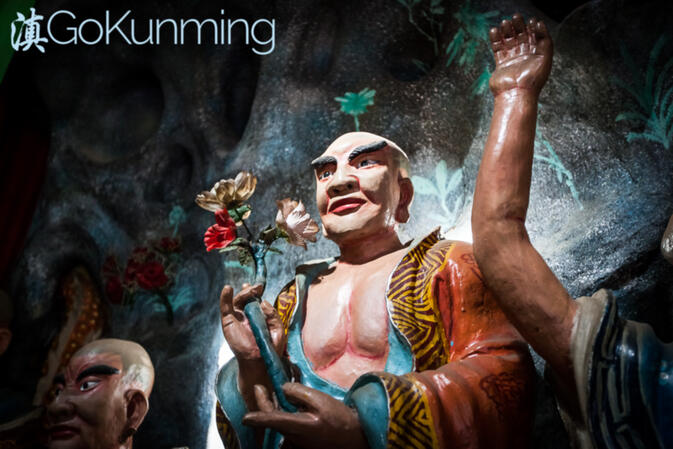 Eventually the walkway reaches humble Xianlin Temple (贤林禅寺), a Zen buddhist shrine several hundred years old. It is a bit rundown but nonetheless lovingly cared for. Incense still burns in the shrine's elaborate censer and slow remodeling work is being carried out on the pavilions.

Renovations are much needed as the roof of the main shrine is missing some of its slate shingles. This has allowed water to get in during rainstorms and is putting the temple's fabulous golden Buddha and small collection of Bamboo Temple-style arhat sculptures at risk. 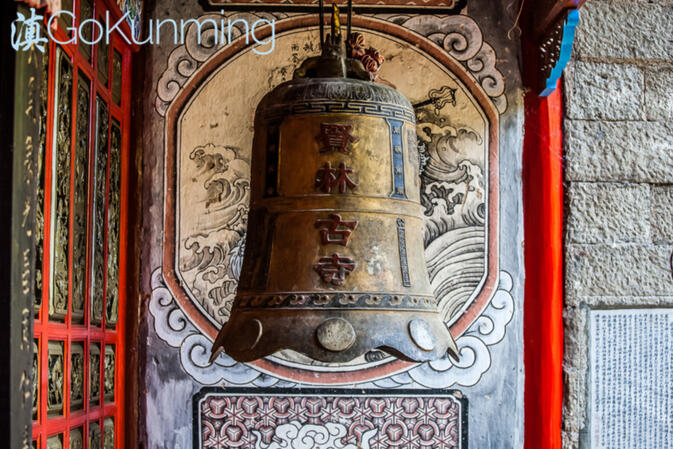 The temple is also home to an impressive meter-high bell suspended just outside the entrance to the pavilion. Its bronze surface is carved with waves and inscribed with the characters for the name of the temple.

Nearly 30 meters above the temple compound are a series of wooden and stone pavilions clinging to the overhanging cliff face. Some are supported by tall, thin stilts, while others sit perched precariously on small outcroppings of rock. These contain more statues of the Buddha as well as those of Guanyin, the goddess of mercy. 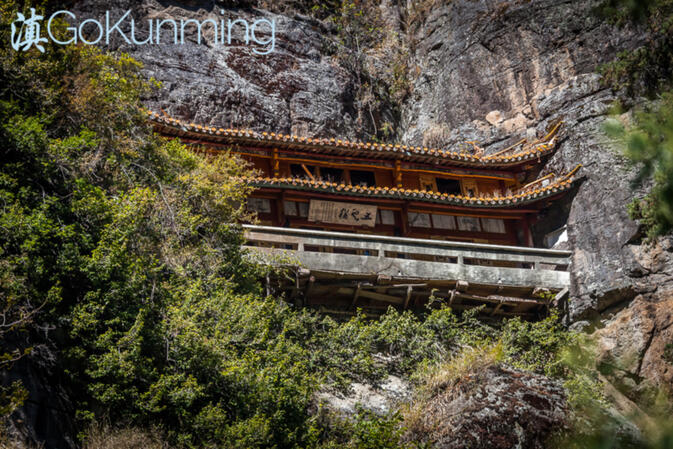 Hikers must pass through the temple in order to continue along the track and representations of lions are everywhere along the route — some of them playing, others reared up on their hind legs in fighting stances. Many are hidden by dense underbrush or carved into cliff faces obscured by stands of trees.

Although most are little more than a decade old, the statues often appear much more venerable. The dampness of the forest has led to many of them sporting thick coats of green moss and lichen over their porous stone skin. One of the only statues in the park not of a lion and curiously free of moss is a life-sized sandstone carving of Xu Xiake (徐霞客), China's greatest geographer and explorer. He visited the mountain in 1639 near the tale end of his 22-year journey to almost every corner of the country.

Xu is the first person to correctly surmise that Yunnan's Jinsha River is the headwaters of the Yangtze. His posthumously collected Travel Diaries of Xu Xiake mentions his time in Jianchuan, his hike through the hills and his pilgrimage to the stunning temples of Shibao Mountain. 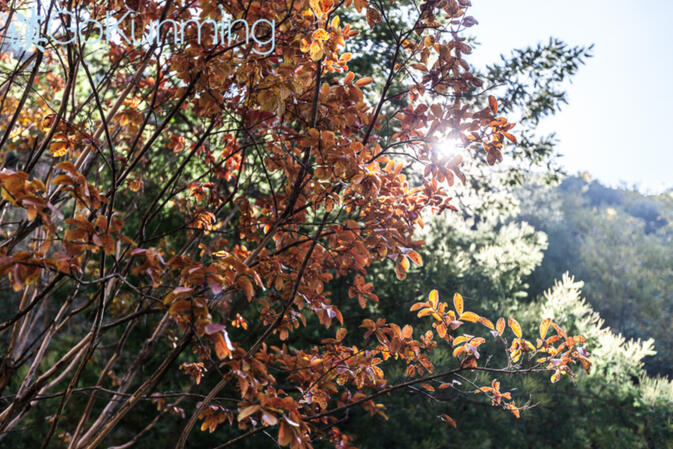 Just above where Xu's stone effigy looks upon the mountain face is a rundown building dedicated to perhaps the area's most famous native. Inside the wooden structure, set amidst sacks of mouldering and seemingly forgotten cement, is the bronze bust of Zhao Fan (赵藩).

Born in 1857, Zhao became a master poet and calligrapher before achieving success as a politician. It is in his calligraphy that the "Long Couplet" (长联) of Kunming's famous Daguan Temple is written. Hopefully the bags of concrete are an indication that a renovation is coming for what could be a lovely monument to Jianchuan's most notable former resident. Up above the memorial hall the forest becomes much thicker and the path, before open to the sky, becomes enclosed by foliage. The temperature drops in the shade and the only things visible other than trees are a few ancient graves built into the side of the mountain.

Eventually the path comes to an outcropping of rock overlooking Thousand Lion Wall (千狮壁). The cliff face was once planned to be carved with 1,000 animals but a much more modest number of 40 were actually completed. Less than a kilometer beyond the wall the path comes to its end at the foot of a truly massive statue. Nicknamed the Lion King (狮王) by locals, the sculpture of a sitting lion towers 25-meters over the bluff. A sign claims it is the largest sculpture of its kind in the world.

Carved directly out of the mountain over a period of seven years, the Lion King is a considerable stylistic departure from the smaller animals that dot the mountainside. According to designer Chen Yongfa, they were carved with a nod to the stone-working aesthetics of the Yuan and Song dynasties.

In stark contrast the mammoth sculpture on the mountain's peak appears much more modern, and from some angles almost looks airbrushed. He stares out from the mountainside facing northeast, his gaze firmly fixed on the towering massifs Yulong and Haba some 100 kilometers in the distance. Thousand Lion Mountain is less than ten minutes drive northwest from Jianchuan Old Town. Individual entry tickets can be purchased for 20 yuan and the park is open daily from 8am until 6pm.

There are direct buses from Kunming to Jianchuan and tickets range between 130 and 157 yuan. Buses leave from the West Bus Station and the trip should take no longer than ten hours.

Alternately you can first travel to Xiaguan (下关) by bus, car, plane or train. From there, tickets to Jianchuan are 65 yuan and buses depart every 15 minutes between 6:30am and 6pm. Curiously, return travel along these same lines is significantly cheaper. beautiful! Thank you for sharing

very nice story, we shall try to go there...Thank you

Looking for an experienced English Teacher.

March 3, 2021 "Kindergarden in Kunming is looking for an English Teacher. Must have teaching experienced. Full time position. If you meet the requirements please sen …"

March 3, 2021 "Hi guys My name is Ray, working in Kunming as translator now, I noted that many of my colleagues and their friends are looking for a Chinese Teacher h …"

March 3, 2021 "I am an English teacher. I have been teaching in China for more than three years. I am free these days. I am in Kunming and I am looking for a job in …"

March 3, 2021 "I offer private English teaching in my or your apartment (online lessons are also possible). Any ages, any levels and any skills: writing, speaking, r …"

Looking for Managers and English Teachers!

March 3, 2021 "Voice in Nature English (Lijiang) promotes the vision of connecting the world through language and connecting people with nature. Our mission is to in …"
Living in Kunming Wookster