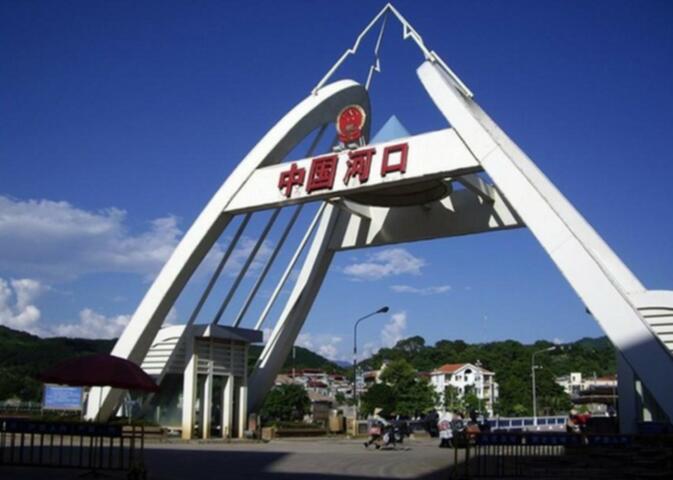 The border crossing from Hekou, China to Lào Cai, Vietnam

Eight years ago, China suspended several overland border crossings into neighboring countries. As of this week, thirteen of those once-popular waypoints have reopened in efforts to increase trade and boost international tourism, People's Daily is reporting.

Tourist traffic to Southeast Asia through Yunnan was once a booming business for several small border towns. The issuance of one-day tourist visas led to hundreds of thousands of mainland tourists a year queuing up to visit other countries. All of this traffic contributed tens of millions of yuan to local economies. It all fell apart, according to People's Daily, when concerns over high stakes gaming came into play:

Initiated in the early 1990s, cross-border travel was harmed by concerns over gambling in the border areas. The [Chinese] government cracked down on cross-border gambling activities in 2004 and officially closed the [border crossing] business on Nov 2, 2005.

The lifting of travel restrictions was approved by China's Ministry of Public Security (MPS) on December 16. It allows for Chinese citizens and foreign guests to apply for visas valid for between two and eight days, dependent upon destination. Although specifics were not spelled out in the People's Daily article, it did mention visas will be available at the "exit and entry authorities in five border prefectures and cities" referenced below.

Gambling may have played a large roll in the suspension of cross-border travel, but concerns over the rising influence of organized crime and drug-running most likely kept the prohibitions in place. Despite the closure of many international entry points in 2005, tourists and workers from Yunnan have intermittently run into serious trouble when venturing across borders.

Dozens of Chinese students were held for ransom in Myanmar in 2009 after being lured across the border with promises of high-paying jobs. That situation led the Chinese Foreign Ministry to issue an uncommon edict warning its citizens not to visit Myanmar.

Strained relations between China and its neighbors reached perhaps their most troubled point in 2011 when 13 Chinese sailors were murdered by a Burmese drug syndicate on the Mekong River. The killers were eventually apprehended, extradited to China and sentenced, largely due to cooperation between Chinese, Burmese, Lao and Thai law enforcement agencies.

Such international cooperation, bolstered by the establishment of four-country joint patrols of the Mekong, have calmed former tensions. Yunnan is also enjoying its best year ever in terms of trade with Southeast Asia. The lifting of travel restrictions may be an attempt to take further advantage of an already lucrative situation. To allay any lingering fears Beijing may have over gambling, tour agencies assisting travelers can now face the loss of their operating licenses if tourists in their care enter foreign casinos and gamble

Below is a list of all 13 ports of entry and exit in Yunnan followed by the arrival country and city. Destinations are followed by the maximum length of stay noted in parentheses. Unless otherwise noted, all travel is overland. Tourists are advised to apply for short-term visas at least 24 hours in advance of their scheduled departure date.

what great news! Does this mean we can go down to the Vietnamese or Myanmar border and get our visas there? No need to apply in advance in Kunming?

i'm a bit confused... is this only for tour groups? otherwise why would they specify the mode of transport for the return??

Yunnan reopens these borders to Chinese organized tours. Thats what you make out of the Chinese news.

Its up to the Vietnamese side - and the Burmese - to issue visas, to independent foreigners that are not on Chinese tours. This didnt happen before, and it is not part of this policy now either.

There used to be excited Chinese tours down to Burma to local casinos and watching transvestites dancing, but foreigners could not sign up here.

According to the news this was done on Monday. On next day a bomb blew up a Chinese truck - on Mandalay-Muse Rd (Ruili) - a few kilometers from border, killing 3 people.

It would be odd if they would let this border crossing open now- and particularly opening it for foreigners - but there are indeed many odd things in China.

It allows for Chinese citizens and foreign guests to apply for visas valid for between two and eight days, dependent upon destination.

Where does one get the visa? At the Consulate or are they arrival visas issues at the border?

Chinese authorities won't let you out without visa in your passport to Vietnam and Myanmar, how can you go to the other side to apply for visa even temporary, no any offices connected to both countries in Chinese side of border. Just for Chinese as it used to be before, never was allowed to a foreigner to cross to Vietnam or Myanmar without Visa.

Yes, to be honest, this is highly confusing information.

Recently I have seen many post regarding Myanmar with much heresay and conjecture being passed with the sole exception of Peter99 who has actually crossed the border and knows what he is talking about. Of the 13 borders mentioned above, 5 are for Myanmar. Lets see if one of those posters makes their way to one of these small borders and tries to cross into Myanmar without success.

The Hekou border in Honghe has always been opened and is certainly an International border. I have no idea why this border is mentioned as one of the 13 borders that has been RE-opened.

The Border in Mohan, Mengla, Xishuangbanna has also always been opened and is certainly an International border. Again, no idea why this border is mentioned as being RE-opened.

I caution anyone who wants to use any of the borders mentioned here to go verify the information at the appropropriate Consulate.

Something odd about the lengths of times listed - I think they must be for Chinese citizens. I have gotten the usual China-Laos visa at the border south of Jinghong about 6 times over the past 10 years: it always took me qabout 20 minutes, cost about US$35-40, and was good for a month (with US passport). Crossing from Hekou to Viet Nam, which I've done twice in the past 7 years, required that I get the visa in Kunming, but both times it was good for a month.

Have I read this thing wrong?

My apologies for the lack of clarity. Initial source articles were a bit vague and so was I. Additional research confirms "both residents and non-residents of Yunnan can apply for travel permits". This can be done, according to an updated Yunnan Net report, at the border itself and also at the local Public Security Bureau (PSB) in the city from which you depart.

There is no confirmation that all of the new visa-holders must join a tour group, but it seems very likely. The Yunnan Net reporter was in Ruili and noted that the first tourists using the new visas were picked up by a "tour car company" once they crossed into Myanmar.

I am getting it touch with a Yunnan travel company this weekend and will post any new information here in the comments section.

Ah! but what do they mean by "non-residents of Yunnan"? This sounds like Chinese nationals not resident in Yunnan. Which would allow non-locals to cross these borders.

This would not include foreigners.
As for the number, 13 re-open, when some were not closed. That is typical of the way things often get reported in some parts of the world. Like the list of 700 universities was published and China had x number in the 'TOP 700 world ranked universities'.

You cannot cross into Myanmar without a travel visa according to the head border official in Muse. The only way to to apply for a visa is through Kunming, and the only visas offered are for fly-in destinations.

There is a work around from Ruili where you can hire a car (read: guided tour) in Ruili to take you across for either 3 or 8 days. That is the thing that is allowed, and that's the legal grey area.

My Chinese wasn't good enough to understand all of what the guy was saying, but that was the gist.

@Peter99, as you say, it's up to the individual countries concerned, not China, to allow entry to Myanmar/Vietnam overland from China. If a bomb attack occurs in Myanmar near the Chinese border (where I've been to just like you have been), that's something that should concern China but isn't enough to prevent the Chinese authorities from allowing foreigners to cross as foreign citizens are not of concern to China when they exit Chinese territory. Having said that I keep reading that the official opening of the Ruili-Muse crossing to passport and visa holders of all nationalities is scheduled to proceed as planned this year, but an exact date is not yet known. 4 border crossings with Thailand opened last August and I have travelled overland into the interior of Myanmar to/from Thailand 3 times since that time.

As others have said, a number of these crossings have always been open so I don't know what the authorities mean about being recently "re-opened". The Lao Cai-Hekou crossing is open to all who have valid documents to cross between China and Vietnam there (some nationalities don't need a visa to enter Vietnam and as such can just cross through without a visa). Only cars generally can't cross the border here, one must be a pedestrian to cross and there are no cross border bus services either.

Yea, youre right. Even if the border area is volatile in Burma, this is up to Burmese side. As happened 2012 - if I remember the year correctly. Chinese could not cross but foreigners could - well, with the proper permits of course. Even though there had been fighting near Muse.

So maybe the border will open this year. Its all cool. But they need to get things in order there too. Burma has been classified as worlds third most corrupted country in this world, so one may suppose its a lot about how the corruption proceeds too.

So anyway, in another thread we pondered about crossing from Jiangcheng to Phongsaly (Laos) - right. I tried that this week - from Chinese side - but was refused (on Chinese side). I suppose I was among the first foreigners who have tried this, juding by the astonishment there among the border guards. Villagers near were also amazed about a foreigner stumbling around there.

The news there was that Laos border there is not open to foreigners (yet). The question "so when is it then?" was answered with a laugh and sceptic gestures, as if it will not open in a decade.

But these people are not to be believed too much either, they balatantly lied about the situation concerning the Dengue fever too - last summer. So fingers crossed.

A clean and safe place to live.