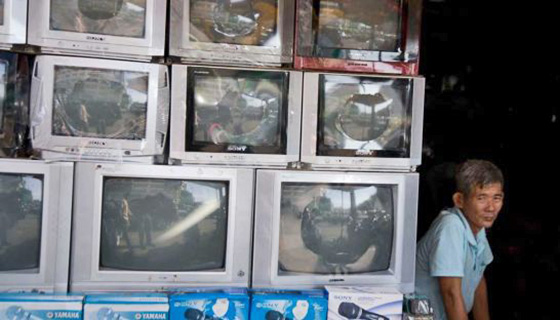 Televisions on display at a store in O'Russey market in Phonm Penh in 2012 (Image: Joseph Pocs)

Editor's note: This article was originally published in the Phnom Penh Post and authored by Eddie Morton.

Cambodia could soon get its first Chinese-run digital television station, the latest local project hailing from a country that represents one of the Kingdom's largest foreign investors.

The report said the company will commence broadcasting "soon" in Phnom Penh and Kampong Cham, Siem Reap and Battambang provinces, in both Khmer and Chinese languages.

Several Chinese news agencies and newspapers operate in Cambodia, but television marks a departure from the norm. Details on programming and launch dates for the station were unavailable. Kanharith did not immediately respond to requests for comment about whether the station would offer a subscription-only cable service or not.

In the AKP report, he was quoted as pledging support to the company in the form of assistance from Cambodia's own technical experts. Yunnan Mobile could not be reached for comment.

CEO of One TV Vora Ouk welcomed the station but questioned the seriousness of the investment and the content offered by television stations without local experience.

"[But] in the end television depends more on the content . . . If they are serious about quality content and a permanent investment, it can be a good investment," Ouk said. "Cambodia's television market is small and a very easy market to penetrate."

"You must support a free market," Nall said. "When a newcomer arrives, it exposes our weaknesses and then we can improve on our services. If we had no competitors, we would not see our weaknesses."

But Nall added that more competition from foreign media organizations would mean fewer advertising dollars for the local market.

"Companies do not want to pay, are not ready to pay too much for advertising."