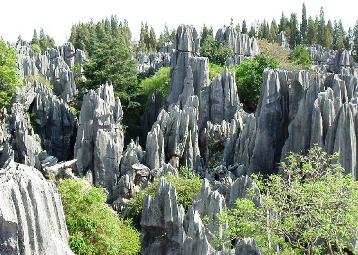 The 'South China Karst' area, which includes Yunnan's Stone Forest (石林, shilin) and Karst formations in Guizhou, Chongqing and Guangxi was selected by the World Heritage Committee on Tuesday to be inscribed on UNESCO's World Heritage List.

South China Karst will join Madagascar's Rainforests of the Atsinanana and South Korea's Jeju Volcanic Island and Lava Tubes as the newest members of the list, which represent UNESCO's aim to "encourage the identification, protection and preservation of cultural and natural heritage around the world considered to be of outstanding value to humanity."

UNESCO's decision to include South China Karst on the World Heritage List marks the third time that a site in Yunnan has been added to the list. Previously, Old Town of Lijiang and Three Parallel Rivers of Yunnan Protected Areas were added to the list in 1997 and 2003, respectively.

Inscription on the list will likely boost domestic and international tourist visits to Stone Forest, but it is doubtful that Shilin will receive the significant influx of tourists that Lijiang has experienced since 1997. Protecting the area could lead to more discoveries - or rediscoveries - of rare flora and fauna such as the reappearance last year of Paraisometrum mileense aka mile jutai (弥勒苣苔), a yellow-flowered plant that only grows on Karst limestone formations and was last seen in 1906.

Looking at the other Yunnan inscribees on the list, The Three Parallel Rivers of Yunnan Protected Areas have benefited from efforts by environmental NGO The Nature Conservancy in conjunction with the Chinese government to minimize the impact of development and increased tourism in the area. The Chinese government has placed enough importance upon the areas to name a 2,000-square kilometer portion known as Pudacao as China's first national park two days ago. The area's spectacular mountainous terrain is brimming with tourism potential and is expected to see major growth in tourist visits as nearby Lijiang is built into a regional air hub connecting secondary cities in Yunnan with Chinese and Southeast Asian cities.

Lijiang was visited by more than four million tourists last year, with more than one million of them coming from Beijing. Not surprisingly, daily direct charter flights connecting Beijing and Lijiang were launched on Monday.