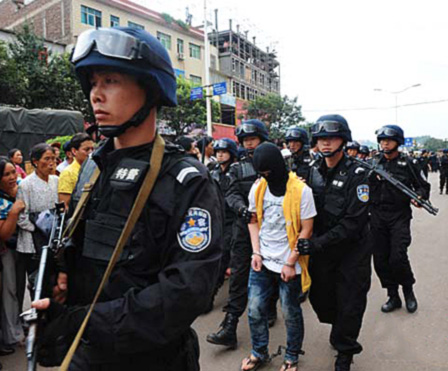 A ten-day, multi-province killing spree by two Hunan teenagers has come to an end and the suspects have been brought to Kunming to stand trial.

The two teenagers were captured separately on September 6, one in Shenzhen and the other in Jiangxi. The suspects, identified as Fu Zhenli (付振立) and Liu Qizhi (刘启智), were later transferred to Yunnan, where they have since confessed to the string of seven robberies and murders.

The pair committed what would prove to be their final murders in Yunnan on August 29 and 30. First they robbed and killed a lone woman in Fuyuan County (富源县) in northeast Yunnan. The next day, according to police reports, they killed a two-year-old and her mother — a Fuyuan hotel manager who was five months pregnant. They stole the woman's jewelry, cell phone and cash from the hotel register.

Before coming to Yunnan the teenagers allegedly first forced their way into a woman's apartment in Hunan and strangled her on September 21. They stayed in the residence until the woman's husband returned home and then killed him for his money as well.

Police interviewed by Life newspaper said the youths wanted more cash and told their parents: "There are many ways to make money these days and we will support you. We are joining the mafia and will become rich."

Together the boys traveled to Guangdong where on August 25 they talked their way into a woman's hotel room and murdered her, again waiting for the husband to return before strangling him as well.

Apparently emboldened by the crimes, one of the teenagers chatted about his activities with his friends on QQ. In that online conversation, which was partially released by police, the suspect wrote: "So many police and they still can't find me. It looks like I will keep on killing." They were apprehended three days later.

One of the nicer things about living in China is an effectively administered death penalty.

Yes! Will they give them the death penalty even if they are teens?

How many of the seven did they shoot?

This is crazy! Sounds like the kind of thing you hear about happening in the US, not China. Anyway, they were arrested quickly and yes, Liumingke1234, they can and most likely will be given the maximum penalty for their crimes. I believe in China 14 year olds can be tried as adults. It doesn't say how old these teenagers are, but my guess is they are certainly in their mid to high teens.

The comments on the chinese website linked are much more inspiring than the ones here...death penalty is not gonna solve the problem, things like this happened and will happen again and the way china is growing under the God of Money will just produce more monsters like that

Against capital punishment per definition here. Also, in China a bullet to the neck normally happens less than a month after the sentence and then that's it. These guys won't suffer, it will just be over. Personally I'd like them to spend life in a Chinese prison/work camp, every day like hell. Somehow seems more fitting.

Think what? That guns are good?

I agree with misfit that capital punishment is not gonna solve this problem. It's an emotional response that will not change anything about the situation.

It does make one think: Imagine how many would have died if they had guns?

Please remain on topic. Any comments deemed unsuitable will be removed.

Is this a good time to ask why the thread relating to anti- Japanese feelings was locked?

If not delete away!

If I was the owner of this website, I would also be cautious of political statements and comments made on this forum. I believe we are given much leeway on many occassions to make semi-political comments and I am grateful for being allowed to express myself freely. However, (We) the users must also recognize that this website is Not our own and we must remain respectful to the hosts who grant us the priviledge of using this forum.

The moderators and owners of this site have the right to protect their property when it comes to sensitive issues in a foreign country.

Has anyone considered that these teens have not yet been given a fair trial? Shouldn't they be proven guilty before being executed?

@ Danmairen Couldn't agree with you more here Dan. I think we need to look at our wise friend, Justice Kennedy, on this one. Enjoy:
www.youtube.com/watch?v=Hyph_DZa_GQ

A few thoughts: The article says quite clearly that they confessed, making notions of 'innocent until proven guilty' a bit superfluous. Also, people writing in the forums on GoKunming don't usually issue final verdicts in Chinese courts.

Death penalty much preferred over lifetime of slave labor!!

dr. chibbles, fair enough! I guess I skimmed over it too fast!

Two TEENAGERS decided to murder people for money and they did it with extreme cruelty...
Do you think it is natural? Maybe as natural as cockroaches coming to your kitchen when you don't wash dishes for 4 days...
The illusion of "doing justice" is the best alibi for societies who don't want to admit that they should be the first to go to trial...

Actually, murder may not be the correct word. Homicide, is a broad covering the taking of a life with murder a subset of homicide. When the homicide involves robbery, Chinese law does not classify this kind of homicide as murder. In the West, the definition of murder tends to be broader than the Chinese definition.

I found it difficult to parse Chinese homicides, such as those described above into the Western equivalent of murder. Any comparison of Western and Chinese murder rates based on official statistics needs some SWAG to be accurate. Of course, my SWAG is better than your SWAG. :-)

From the little I know of Chinese law, the above killings would not be classified as murder due to main intent being robbery and the killings a secondary factor. So it is, under Chinese law it is, "Two teenagers decided to rob people for their money and also killed them."

If I am wrong, I would enjoy hearing from a competent authority.

Okay, I rarely comment, but wish to support the authorities in this matter. If the alleged murders are found guilty, as they have already confessed online and too authorities, then I believe they have the legitimate power to execute them. It is not an emotional reaction as someone stated, but a respect for the lives taken. It is life for life. That is the guiding principle. This is not hard to comprehend. The perpetrators sacrificed their own lives when they slew the innocent whom they rob of both money and life. This is so elementary it is hard for me to grasp how it can be missed. It is sad these young guys had no conscience and moral compass, but the authorities seek to protect society by enacting these measures. Don't forget about the cannibal who was shown leniency and let out after killing prior and then went on a decade long horrific adventure of slaying and eating others. If he had been executed after the first offense, then many would be still alive today. If any of you were being attacked, you'd fight to the death to survive even if it cost the life of another. Your actions would be justified because your life is of value and this is the same action the state is taking by protecting it's citizens from any who have killed and could potentially kill again. If you can protect yourself, the authorities can protect its citizens.

HowDon, interesting comment, so I wanna ask you if the principle life for file is so elementary how can you explain that most of the countries in the world abolished death penalty?

Misfit, To answer your question, I think because with that most western countries influenced by the western enlightenment rationalized away the death penalty as a deterrent that didn't work to curb murder and therefore saw the act as inhumane, but forgot the life that was lost in this thinking process and therefore devalued the life of the victim. I think there are additional influences in those decisions such as secularism, but I need to go to bed as work calls in the morning. I am sure my answer is not enough for this topic as it warrants more in depth analysis, but I still side with the state protecting it citizens.

Misfit, To answer your question, I think because with that most western countries influenced by the western enlightenment rationalized away the death penalty as a deterrent that didn't work to curb murder and therefore saw the act as inhumane, but forgot the life that was lost in this thinking process and therefore devalued the life of the victim. I think there are additional influences in those decisions such as secularism, but I need to go to bed as work calls in the morning. I am sure my answer is not enough for this topic as it warrants more in depth analysis, but I still side with the state protecting it citizens.

@dan
Normally I'm an ardent proponent of properly administered and executed capital punishment. The US system in general is a joke. In this case - I agree with you.

@Liumingke1234
I'm sure if you offered to pay for their incarceration expenses for life, the government might actually consider commuting their death sentence to life imprisonment.

However - wouldn't those funds be better spent compensating the victims families and loved ones, as best as possible. While the death penalty is arguably rather uncivilized - it definitely removes repeat offenders from society permanently.

But repeat offenders are, like everybody else, a product of society. They should not be removed permanently from society, but be given help so that they might, in time, be allowed back into society and live peacefully and constructively within it. Society has a responsibility to take care even of this people, and killing them would mean the utter failure in this regard.

This I say coming from a country where hardly anyone can ever be incarcerated for more than two decades, and I do think that is very good.

Both men have been sentenced to death and will forfeit all of there personal worth to the government:
www.globaltimes.cn/content/791028.shtml#.UcfAj1rN-4c

Thanks for the update.

forfeit all of their personal worth? how much did donnie brasco and scarface get from all their victims? 12 cell phones and some pocket change?

On death penalty issue alone.
Nobody has mentioned miscarriages of justice. And there are many reasons for this phenomenon, including forced confessions (not that that has ever happened).

These two chose to do what they did regardless of society. Virtually all people, raised in the same society, choose to live a decent life and help others rather than kill them. It saddens me also, but these two should get the death penalty.

Justice is an ideal, ultimately probably unattainable. Vengeance might be the best approximation of justice under some social conditions, but they are not the same thing. I find the knee-jerk identification of the two concepts in China (and in many other places) when considering murder to be unfortunate - a product of history, like everything else, and not some moral rule embedded in the structure of the universe. We don't have to pretend we're living in the woods, or under battlefield conditions.