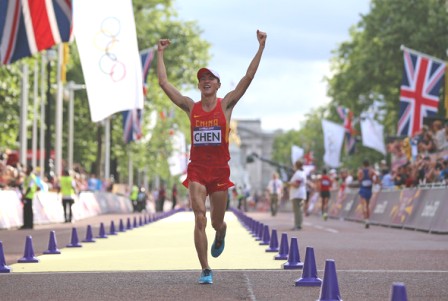 A Yunnan man has become the first person from the province to win a gold medal at the 2012 London Olympics. Chen Ding (陈定) from Baoshan county in western Yunnan won the 20 kilometer racewalking competition held Saturday on The Mall in London.

Chen set an Olympic record on his way to gold and finished with a time of 1:18:46. He beat a field of 55 other competitors, including heavily-favored athletes from Japan, Ireland and Colombia, many of whom were disqualified.

Racewalking, which has been an Olympic sport since 1904, requires competitors to always have one foot on the ground. If both feet leave the ground simultaneously a red card is issued. An athlete receiving three red cards in one race is automatically disqualified.

Sidelined by back and knee injuries while training in 2007, Chen slowly worked his way back into competitive shape. He set a Chinese record in the 20 kilometer racewalk earlier this year at the 2012 IAAF World Race Walking Cup.

Chen was joined on the medal podium in London by countryman Wang Zhen (王镇) who took bronze. The gold and bronze medals are the first ever for China in this event. The duo's performance added to China's leading medal count and provided the 20-year old Chen with a somewhat unexpected birthday present.