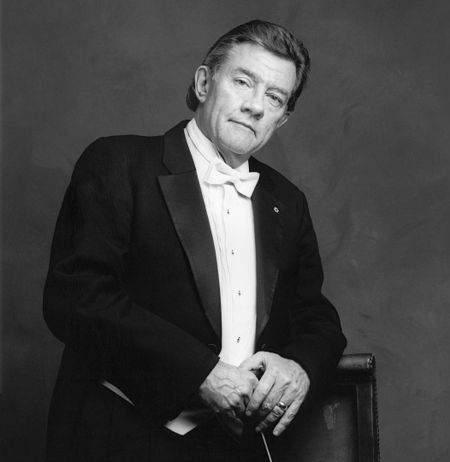 Canadian-born conductor Howard Dyck has been directing classical music and choral works for 40 years. His career has taken him to countless performances around the world, including a visit to Kunming in 1999.

This spring, Dyck returned to the Spring City and is currently instructing choral classes at Yunnan Arts University (formerly Yunnan Art Institute) at both the Chenggong and downtown campuses.

Before becoming a conductor, Dyck studied Choral, Orchestral and Opera Conducting at the Hochschule für Musik Detmold in Germany. He also worked for the Canadian Broadcasting Corporation for 32 years, hosting the radio programs Choral Concert and Saturday Afternoon at the Opera.

In addition to conducting and working on air, Dyck co-founded Consort Caritatis in 1994. The concert ensemble has raised more than US$250,000 through performances and CD sales and donated the proceeds to several international humanitarian causes.

Dyck will conduct the Kunming Nie Er Symphony Orchestra May 25, at 8pm at the Kunming Theater. The concert will begin with the world premier performance of East Meets West by Chinese-Canadian composer Chan Ka Nin. The debut will be followed by Rachmaninoff's First Piano Concerto with concert pianist Sun Jingya (孙静雅) and will end with Dvorak's New World Symphony.

GoKunming recently sat down with Dyck to discuss his career, his time in China and his upcoming concert:

GK: When did you begin conducting?

Dyck: Conducting was something I did simultaneously with my radio work. I began in 1972 with the Grand Philharmonic Choir in Waterloo, Canada and continued until I retired in 2010. While I was directing the choir I worked closely with the local professional orchestra as well.

GK: How did you first come to Kunming?

Dyck: A friend of mine in Canada organized an International Festival of the Arts in Sophia, Bulgaria in 1994 and asked me to conduct the choir and orchestra. I agreed and became involved in the festival myself. In 1999 the festival came to Kunming and I came along with it.

GK: What pieces did you conduct during that performance?

Dyck: Well, I was asked for a list of potential pieces and came up with a pretty extensive one. At the end I somewhat jokingly added Handel's Messiah, which I am very familiar with but didn't think had a chance of being selected.

To my surprise the organizers here in Kunming jumped on it. They didn't have a local choir to perform the choral arrangements so we arranged to bring 30 professional singers and soloists from Consort Caritatis over for the performance in Kunming.

The Kunming orchestra wasn't particularly good at that time and was divided into two groups, one for theatrical and one for symphonic performances. The two were combined sometime after 1999 and renamed the Nie Er Symphony Orchestra. Whatever their skill level, they pulled off the performance of the Messiah. They had passion and did a fine job.

After the concert several members of the orchestra came to me and said they were so moved by the music they had trouble playing because they were crying. I later learned that our concert was only the second performance of the Messiah ever in China.

GK: What do you remember most about Kunming in 1999?

Dyck: I remember hearing about a village of Miao people who lived outside of Kunming and had been taught extensive choral sections of the Messiah in the nineteenth century by English missionaries.

Several people from that village actually came to our dress rehearsal and I invited them on stage to join us in singing the Hallelujah Chorus. Not only did they know it, they could sing in four part harmony. I was stunned.

The next day CCTV took me, Consort Caritatis and the Miao singers to a studio where we recorded a rendition of the Hallelujah Chorus accompanied by a piano accordion! CCTV made a mini-documentary about it that was aired nationwide in China.

Dyck: It was. And just a few weeks ago, my wife Maggie and I got to travel to the Miao village and see them perform the same selections at a church service, again with an accordion. It was wonderful. They even asked me to conduct.

GK: So what brought you back to Kunming after nearly 15 years?

Dyck: The music department at Yunnan Arts University had been asking me to come back and work with them since 1999. Unfortunately I simply had no time with my radio and conducting commitments.

I'm now retired and when they contacted me again I agreed to come. I visited last year to work out the details with the music department and members of the staff would walk up to me humming bits of the Messiah. They remembered! 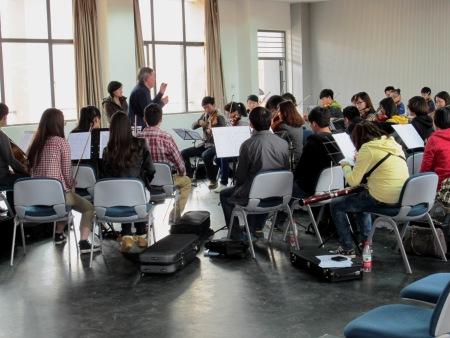 GK: You have been working with choirs here in Kunming, how is that going?

Dyck: I have been working in Chenggong with a choir class of mostly freshman and sophomores. We've been rehearsing Mozart's Requiem and the university orchestra is working at Beethoven's Symphony Number 1. We probably won't be up to performance standard by the end of June, but I think the learning experience is proving to be most worthwhile for the students.

I've also been holding twice weekly rehearsals with a choir on the old campus of Yunnan Arts University, working on Verdi's La Traviata. Originally I thought I was just to be a coach and rehearsal conductor, but now I've been invited to conduct two performances, each featuring a different lead soloist. The soloists are both excellent and we couldn't choose between them so instead the faculty agreed we should have two performances.

GK: When are those shows?

Dyck: Plans are for June 22 and 23 at Yunnan Arts University. They are both scheduled for 8pm and will be free of charge.

GK: Have you been able to see any performances during your time in Kunming?

Dyck: I heard the Nie Er Symphony perform viola concertos by Bartók and Walton with two viola soloists from Beijing. The performance was at the Kunming Theater and it was phenomenal. Not only was the orchestra very good, but the viola players were some of the best I've ever heard.

GK: The concert on May 25 will feature a solo pianist, have you worked with her before?

Dyck: We haven't even met yet. I'd love to meet her and see how she plays before we rehearse together with the orchestra. How a soloist performs affects the way the orchestra plays. In cases like this, I usually defer to the soloist and make adjustments with the symphony. Rachmaninoff is fiendishly challenging for any pianist and takes enormous strength and talent to perform. I have been told Miss Sun is more than up to the task.

GK: Have you found that working with Chinese singers and musicians is different from working with people in the West?

Dyck: My impression is that Chinese orchestras know the Russian repertoire very well. Composers like Prokofiev, Tchaikovsky and Rachmaninoff come to mind. They also know Beethoven but there doesn't seem to be much exposure to Mozart. Of course, they know Chinese composers that Westerners have heard very little about.

As far as working with the singers and musicians in Kunming is concerned, I've found that the language barrier isn't all that bad. Conducting is the art of the gesture and sometimes you don't need to speak. It has been a very good discipline for me and the musicians.

Tickets for the May 25 concert are available at the Kunming Theater box office and Paul's Shop. Seating options vary in price from 30 to 90 yuan.

Great story, GK. Thank you for bringing us information about some different types of events in Kunming. Funny how all those people who previously whined about the lack of news about such events haven't made a peep, huh? Guess its more fun to complain!

Thanks for the great interview. I'm delighted to hear about the, obviously, active classical music scene in Kunming. When I lived there, I'm ashamed to admit that I had no luck in finding concerts like those discussed in the interview. I always wondered what the students who bought all those instruments from the musical instruments stores lining one long street near downtown were doing with them. Now I know.