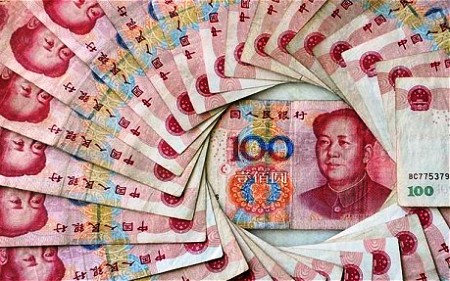 China's economy, while still increasing at a robust 8.1 percent annually, is slowing down after years of double digit growth. In Yunnan province however, gross domestic product (GDP) is continuing to surge, exceeding the average for the rest of the country by 2.8 percent.

According to a report by the Yunnan Bureau of Statistics, the province's economy grew by 10.8 percent in the first quarter of this year. Growth was paced by better-than-expected results from Yunnan's rural areas.

Despite the drought that has plagued Yunnan for three years, output in the agricultural sector rose by 3.5 percent compared to the first four months a year ago.

Growth of several of Yunnan's most important industries also helped to increase GDP. Mining, manufacturing and real estate development all posted significant gains. Collectively they accounted for 86.09 billion yuan (US$13.65 billion) in investments and expenditures.

Fixed assets, which are assets not easily converted to cash, such as land and equipment, saw investment growth of 27 percent. This was largely due to public and private sector investment in the province's flourishing real estate market.

Consumer spending was up significantly as well. Yunnan shoppers spent 76.722 billion yuan (US$ 12.2 billion) on consumer goods from January to March. Those expenditures mark an increase of 16 percent year-on-year.

The economy continued to expand despite negative numbers in total foreign trade. Yunnan's exports posted losses of 10.8 percent compared to the same time a year ago. The report blames the drop on nagging concerns over Europe's debt crisis and increasing international trade volatility.

Government expenditures also rose around the province. Spending on education, health care and social security together saw a year-on-year increase of 43.6 percent, or 64.57 billion yuan (US$ 10.25 billion).

"According to a report by the Yunnan Bureau of Statistics, the province's economy grew by 10.8 percent in the first quarter of this year."

Huh? That means Yunnan economy would expect to grow 40% in one year??? Something tells me the annual figure has been confused with the quarterly figure as this would be virtually unprecedented growth anywhere!

@ blobbles: The economy experienced growth of 10.8 percent when compared to the same time last year. The next three quarters could have growth or contraction so an overall yearly forecast of 40 percent growth is neither implied nor realistic. You are right, no economy expands that fast.

Ahhhhh, OK, so the sentence should read something like:

"According to a report by the Yunnan Bureau of Statistics, over the last year the province's economy grew by 10.8 percent by the end of the first quarter."

Otherwise its entirely confusing as the sentence clearly states a 10.8% growth rate for one quarter.

It was clear to me that this was a year on year growth. Because growth is always expressed in that way.

Sorry tigertiger I disagree - accuracy should never be diluted and/or replaced with esoteric phraseology. In any kind of reporting accuracy is king and the article clearly states "growth IN a quarter". It should be changed as it is incorrect. And growth is NOT always expressed in that way, if it was I wouldn't have found a number of articles stating a quarters growth through google (many currently on the UK's growth rate and from a little news outfits you may have heard of called Reuters/Bloomberg/The Guardian). Growth can be considered over any timespan, it is up to authors and interpreters of financial data to report it accurately. In economics growth is usually measured quarterly or annually and can be reported on in either manner.

I understood. I read economic journals. I wasn't confused.