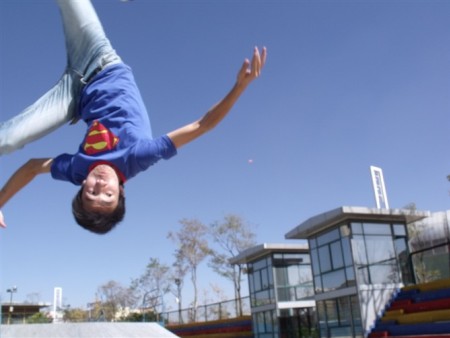 You've heard about people jumping out of buildings in times of recession – but did you know there are some people who do it for fun?

Welcome to the world of Parkour.

Parkour is all about transforming urban environments into a high-adrenaline playground. Whether it's climbing up vertical walls, or leaping from building to building, it's clear why this art form could become more and more popular with Chinese youth. It's a mixture of fun and escape.

Parkour is originally from France, and it was famously featured at the beginning of the James Bond movie Casino Royale.

Thanks in part to a young local man who goes by the name of Obi, Parkour is now taking off in Kunming. Click here to check out his Youku video channel. 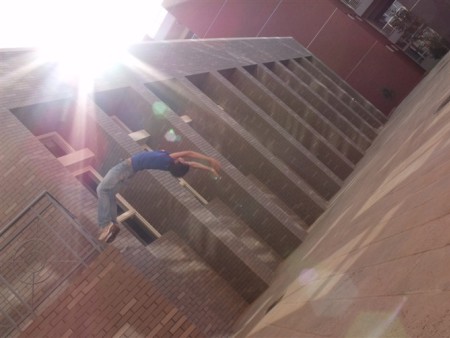 GoKunming: How did you first hear about Parkour?

Obi: I heard about Parkour through the internet, it was 2007, and not many people were doing it in China. One of my friends showed me some Parkour videos. I thought it was so exciting and I immediately fell in love with Parkour.

GK: How long have you been doing it?

GK: Where do you go to do Parkour?

Obi: When I first started I just did it in a park near my home. Later, I found a lot of good places to do Parkour, such as gyms, schools, places near the city center and eventually almost anywhere. 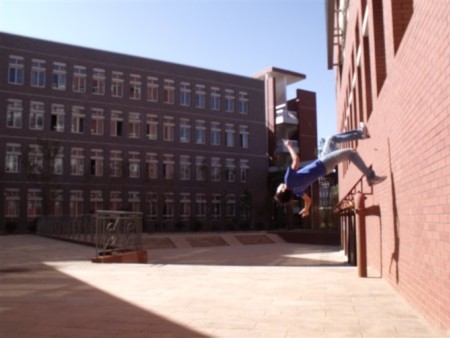 Obi: When I began, I would just do it on my own. Soon after that, I found some people in Kunming doing Parkour and people who wanted try it. We also connected with more people via the internet. In 2008, we established the first Parkour team in Kunming called Dangxin Zhuiluo (当心坠落).

GK: Are there many Parkour artists in Kunming?

Obi: Not so many, maybe only about ten — but we now have a lot of students wanting to learn.

GK: How is Parkour different in China from the rest of the world?

Obi: The main difference is that Parkour is still just starting out in China and a lot of Chinese people don't even know what it is. Chinese kids have a lot of pressure from school and family, so they don't really get the opportunity to try something like Parkour. 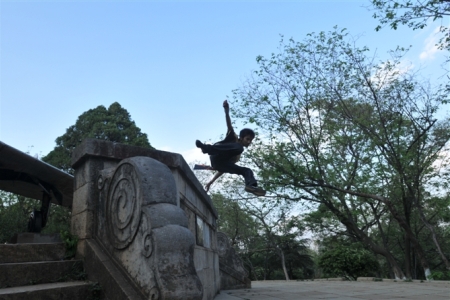 GK: Are there any restrictions for doing Parkour in Kunming?

Obi: When we were starting out, yes there were lots, police and the elderly always told us 'don't do it', some people even thought we were thieves...so we had to do a lot of explaining! But now the situation is getting better because people are more aware of Parkour.

GK: To be good at Parkour what does one need?

Obi: You need to have a fit body and a very strong mind, and most importantly you need friends to do it with. Without that exchange, doing Parkour will be very difficult.

GK: So how does it feel when you are doing it?

Obi: I feel free! I feel like nothing can stop me. Parkour will always be my escape from the pressures of life and that's really what most attracts me to Parkour. When I learn a new flip, or a jump, or a vault, it makes me feel awesome! I love that feeling.

GK: Do you worry about injuries?

Obi: Everyone worries about that. But that's also one of Parkour's charms — you have no idea what's going to happen next. Through hard training you can become very agile. Then when something bad happens to you, you make a good move to keep you safe. If you are experienced at Parkour, then the risk of getting injured is greatly reduced.

GK: Have you been injured before?

Obi: So many times I have lost count! The worst injury was to my knee. I injured one of the ligaments in my knee in 2009. I didn't know how serious it was so I kept doing on. After that, I hurt the other ligament in my knee in 2010. The doctor told me I might not even be able to walk like other people anymore. 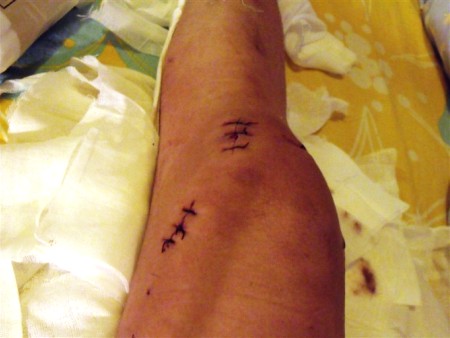 Some injuries are worse than others

GK: How was your recovery? Did you ever think that you might not be able to do Parkour anymore?

Obi: So far so good. The doctor told me initially that it would be impossible to do Parkour again — and that I should rest in bed for up to one year! I was able to prove the doctor wrong, by leaving my bed and wheel chair within three months. When I went back to hospital half a year later the doctor told me I was a miracle. I then just kept training and got my knee strong again. I knew that I probably shouldn't do Parkour anymore, so I was very careful. I thought to myself that getting injured is not a reason to give up. Now it just separates me a bit from other people...and it gives me a good story to tell!

GK: Since your injury then there are some limits as to what you can and can't do now?

Obi: After my injury it made it difficult to do Parkour. It's my left knee, so now I only land with my right leg. I have stopped doing side flips, it's too dangerous for my knee. Now I have my own style that is different to others.

GK: What advice would you give to people wanting to learn Parkour?

Obi: Just keep safe. Find a professional teacher,and don't give up on Parkour. You know, understand "No pain, no gain" and all that.

GK: What's your plan for your Parkour in the future ?

Obi: For the next five years, I just want to keep training, getting better and stronger at it. I also want to try to make more Chinese people aware of it...and hopefully convince them to try it! I have a plan to eventually build a Parkour center in Hawaii, my dreamland, with one of my best friends.

always be committed to your dream of flying, unveiling the heart of freedom.
really cool:)