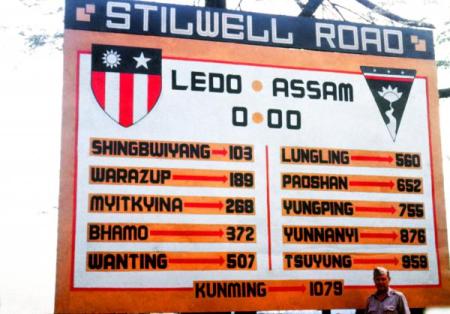 A growing number of influential voices in India are pressing the country's government to revive the Stilwell Road, a World War II-era supply route that once connected northeast India with Kunming through northern Burma, with the goal of increasing India's poor and restive northeast region's business ties with Southeast Asia and China.

The Times of India is reporting that Indian Chamber of Commerce chairman M K Saharia promoted the road's reopening yesterday at a conference held in the city of Guwahati in the northeast Indian state of Assam aimed at promoting regional trade.

Saharia said that a resuscitated Stilwell Road would be the most commercially viable road link with Myanmar, a country where China's influence has grown at a much faster pace than India's in recent years. His push comes just weeks after a retired Governor General of Arunachal Pradesh – also in northeast India – pushed for the road's reopening at a plenary session of the North East Council held in New Delhi.

The 1,700-kilometer (1,000-mile) road, named after US General "Vinegar Joe" Stilwell, who oversaw its construction in 1944, served as a crucial Allied supply route to China in World War II. It connected Kunming with the city of Ledo in Assam, with most of the road passing through northern Myanmar.

India began to rebuild its 61-kilometer segment of the road in April 2007, but then scrapped the project in August 2009, presumably out of security and drug trafficking concerns.

In addition to potentially increasing India's sway in Myanmar and elsewhere in Southeast Asia, a functioning Stilwell Road would create an attractive new channel for goods to flow between India and China and would significantly raise Kunming's regional profile.

Goods hauled between the two countries via the renovated road would take two days to make the trip. Currently, the only transport options are costly air freight or sea routes that pass south of Singapore and through the US-patrolled Malacca Strait. The road's reopening would cut the trip between China and India by 5,000 kilometers.

history about the road and the Hump

As an American married to an Indian and living in Kunming, I'd say "it's high time to rebuild the Stilwell Road!".

While Southeast Asia flourishes due, in large part, to free trade with China and open overland trade, India (while having many goods and services to offer China in return) is still trying to decide if it will play (by the time India decides, it may be too late... others will have benefited). With the 2nd largest economy in the world at your doorstep, an isolationist mentality is not going to help India (at a time when it's own economy is also starting to take off and has a lot to offer).

Kunming is becoming a hub for trade with Southeast Asia and potentially with South Asia as well. Southeast Asia's trade with China has been flourishing in recent years, in large part due to more open borders and road links... with plans to build the bullet-train from Kunming to Singapore, this will only improve.

Kunming's new airport (the 4th largest airport in China) is only 1 hour flight away from India's closest Int'l airport at Guwahati (in NE India), but no flight exists yet... why not? High time for India to get on-board and start letting it's citizens enjoy the prosperity that is coming to Asia... and the Stilwell Road will be mutually beneficial as two of Asia's economic powerhouses open it to trade.