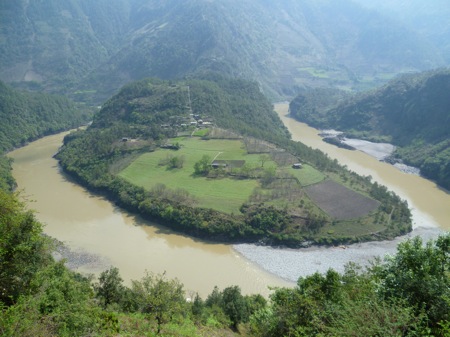 The first bend of the Nujiang

This is the second in a three-part account of GoKunming's recent bicycle touring trip in the Nujiang valley area. For background about the region and the trip, please see the first post, which covered Bingzhongluo and the Tibet border. For more information about getting to and from the Nujiang and other logistical issues, please stay tuned for the final post.

In late morning we take a last photo of the church we've been visiting, strap panniers onto the bikes and depart for a quick 40-kilometer shot down the Nujiang, as the upper portion of the Salween River is known in China. Our destination is Gongshan (贡山), the next major settlement down the valley.

On the way to Gongshan we stop for some snapshots of what is called the first bend of the Nujiang (怒江第一湾). We suspect this probably isn't the first major bend the river has gone around during its journey from farther north, but it's an impressive sight nonetheless. 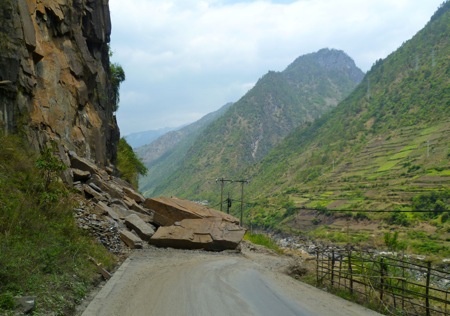 The road surface south of Bingzhongluo is generally well-maintained and good for bicycle touring. But the hillsides are steep and road maintenance workers wage perpetual war against landslides and rockslides. Occasionally a giant slab of rock blocks part or all of the road, waiting its turn to be dynamited and carted away. 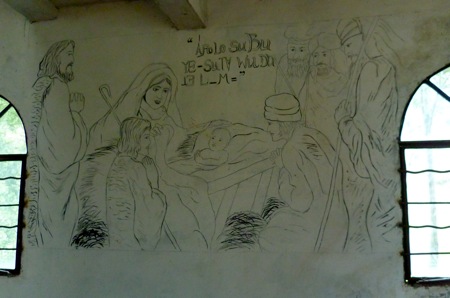 A nativity mural at the Christian Zion Church in Gongshan. The term "YE-Su" written on the wall is similar to the romanization of the Mandarin word for Jesus

Gongshan clings to a hillside above the river. It is filled with concrete box buildings and is not a terribly pretty city. But while we're there we do have the opportunity to see two more churches, the Christian Zion Church (基督教锡安堂) and the Jesus Sacred Heart Church (耶稣聖心堂).

We also pause at Gongshan's northern outskirts to examine the turnoff for the Dulong (Derung) river valley to the west. The Dulong valley is famous for its eponymous ethnic group, the Dulong people (独龙族) whose women's faces were at one time tattooed as protection against abduction by raiders from Tibet. Most of those generations have already died out and younger women today who have facial markings have received them for the benefit of the area's fledgling tourism industry.

The Dulong valley is among the most remote and unvisited places in Yunnan. But it could lose some of this remoteness as early as 2013 when, according to a sign posted at the turnoff, a new road and tunnel from Gongshan is scheduled to be completed.

Gongshan to Fugong
The following day, our third day of riding, we skip breakfast and hit the road early. We've got 100 kilometers of rolling road to cover to the next city, Fugong (福贡), which will also be our stopping point for the night. By this point in the ride the novelty of the giant cliffs rising around us has ebbed, but we still find plenty of sights to amaze us today. 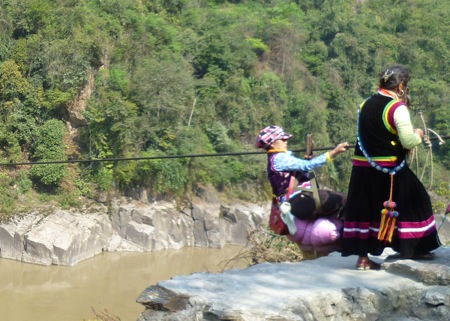 This is the stretch of river where we get some close views of the Nujiang's famous cable river crossings in use. At many points up and down the valley there are two steel cables strung across the river and sloping in opposite directions, each to cross over to a different side. In Chinese these are often called "sliding ropes" (溜索).

Locals bring along their own simple harnesses with wheels that lock onto the cable. After attaching this device to the cable and themselves, they zip off across the river, sometimes with big bundles of goods purchased at the market hanging from their bodies. One can often trace a path leading from the cables' far landing points to the dot-like houses of some tiny settlement high up on the valley wall. 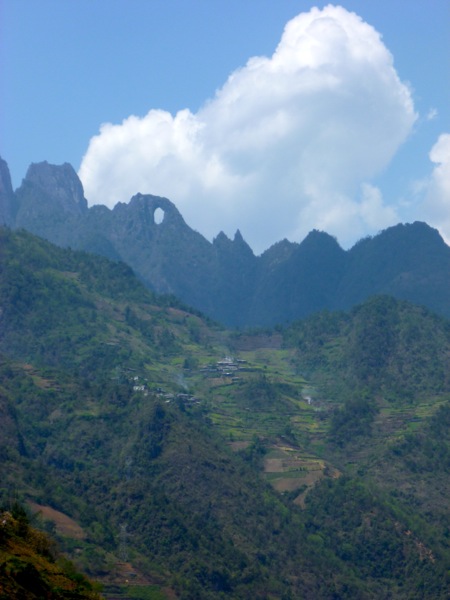 Another quite impressive sight visible from the road is the stone moon (石月亮), which lies almost halfway between Gongshan and Fugong. Stone is a misleading name: it is actually a huge round hole going straight through the middle of a peak that rises across the Nujiang from a village called Lishadi (利沙底).

In Fugong we stay at the first decent hotel of the trip: the newly-built Fuhua Hotel is no-frills but clean and comfortable – neither of which words we would use to describe the previous two hotels in Bingzhongluo and Gongshan. It reinforces our impression that when traveling in China, it's frequently best to skip the advice of a guidebook and simply aim for hotels that have been recently built or renovated. 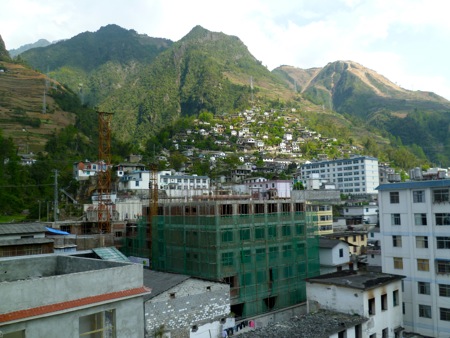 We also stumble upon a restaurant with a bit of atmosphere and local color called Lisu Renjia. The restaurant offers a Lisu dish called shouzhua fan (手抓饭), which is a big spread of meat, vegetables and dipping sauces intended to be eaten with one's hands. It's too much food for just the two of us, so we don't order it – but we do enjoy the restaurant's gardens and outdoor seating.

As the sun dips behind the mountains we begin to think about the next stage of our trip. Tomorrow we continue south before cutting west into the Gaoligong mountains and toward the Myanmar border.

this is a beautiful and pure tour in Nujiang gorge, we have arranged two American people to trip to Nujiang, gongshan, pls click here to enjoy our tour pictures and experience. www.echinaromance.com/routes/ecr0225.htm