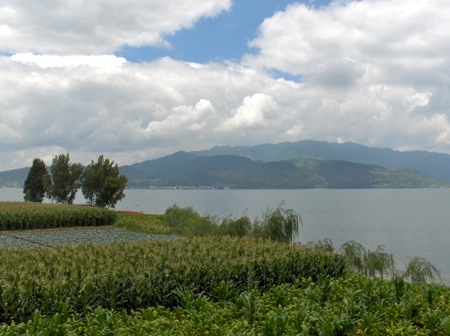 When the Kunming government unveiled plans in 2003 to build a mammoth new urban area in Chenggong County, few could have imagined that the project would now be posing a threat to water quality in Fuxian Lake, which lies about 50 kilometers to Kunming's southeast.

After all, the Chenggong New Area development is situated near the eastern shore of Dianchi Lake, which is part of the Yangtze River watershed. Scenic Fuxian Lake, on the other hand, is separated from Kunming by a ridge of mountains and drains into the Pearl River basin. Runoff from Chenggong is therefore incapable of polluting Fuxian Lake.

Instead, the problem is the large number of farmers that have been displaced from Chenggong in recent years to make way for apartment blocks, government buildings and new university campuses, according to a Yunnan Net report. These displaced farmers have resettled in the Fuxian Lake basin, particularly around the city of Chengjiang at the lake's northern end, and begun farming there, increasing fertilizer and pesticide runoffs.

According to "incomplete" government statistics, by January of 2010 there were at least 2,181 displaced Chenggong households living in the Chengjiang area and farming 2,360 hectares of leased land. A large portion of these are flower growers, who produce year-round in greenhouses and use large amounts of chemical fertilizers and pesticides.

Yunnan Net interviewed one flower grower named Zhang Huiqiang who was displaced from Chenggong's Jinmapu village in 2009 and now has a 0.7-hectare growing operation near Fuxian's northern shore. "This family has been growing flowers for generations," said Zhang. "We don't know what else to do. Besides, the profits have been quite good lately and we can earn up to 100,000 yuan (US$15,150) a year."

Fuxian Lake remains one of China's cleanest large lakes and is a popular destination for weekend visitors from Kunming. Along with northern Yunnan's Lugu Lake it is one of only two lakes in the province to have a class I water quality rating, compared to a lowest-possible class V in the main body of Dianchi.

But a government report released last year about Fuxian Lake warned that its water quality has been steadily deteriorating over the past decade and could soon slip to a rating of class II.

Terrifically interesting, spot-on, very well presented, and hugely important. How often do you get to see a catastrophe in the bud? Though this one is preventable, unlike Dianchi which was caused by a national madmess (see Judith Thompson, "Mao's War Against Nature") which rolled on like a juggernaut. Preventable — that's the main thing, and the fact that people have even noticed this phenomenon is something that is a cause for hope. As for pesticides, I sat next to a Dutch flower grower at the French Cafe one afternoon who went on and on about the need for constant application of pesticides in order to keep nematodes from destroying the flower crop. Is the government discussing alternatives to flower growing for these farmers? Is the idea of organic farming going to take hold at some point? Are the Dutch going to help Yunnan keep Fuxian from becoming Dianchi?

Displacing farmers to make way for suburban developments around China may have a lot to do with the high price of food lately.

the assholes are shitting in to the clean waters

Whatever they say, the dutch are not here for altruistic reasons: cheap labour, low operating costs. If the government allow them to pollute they will pollute.