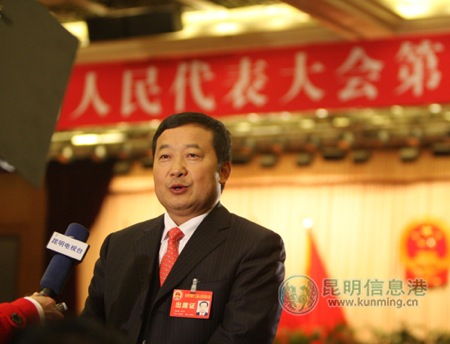 The mayor's re-selection and the broad themes of the "12th five-year guidelines" both hint that Kunming will try to build upon current momentum in economic and infrastructure development over coming years, but with a stronger focus on sustainability, social security and education.

The guidelines voted in at the first meeting of the 13th Kunming Municipal People's Congress will steer decision-making from now through 2015, mirroring the national system of five-year plans.

A native of Yunnan's Zhaotong Prefecture, 52-year-old Zhang first joined the Kunming government in May of 2007 after serving as the mayor of Lijiang.

Before Zhang took office, the Kunming government's credibility had been tarnished by former deputy mayor Hu Xing's failed attempt to flee China in January of that year. Before fleeing, Hu was being investigated for taking more than 40 million yuan (US$5.3 million) in bribes while serving as deputy director of Yunnan's Transportation Bureau and Kunming deputy mayor from 1995 to 2006—a legacy visible in current attempts to improve the insufficient traffic infrastructure.

Zhang became mayor in November of 2007, and Jiangsu native Qiu He (仇和) was selected the following month to serve as Kunming Party Secretary, the only position higher than mayor. Distancing themselves from previous Kunming governments, Zhang and Qiu have promoted their administration as one of transparency and accessibility.

The pair have overseen a period of transformation for Kunming, including red-hot GDP growth, large-scale demolition and rebuilding of residential areas, the construction of a new second ring road, the start of a new metro system and the as-yet-unfinished construction of a mammoth new international airport.

In an interview with Kunming Information Hub, Zhang said that he was committed to carrying on the strong economic growth of the last several years by accomplishing the laundry list of agricultural, industrial, trade and investment goals set forth in the new five-year plan.

"Our goals are clear," Zhang said. "The critical issue is managing to implement them." He went on to say that if the goals of the plan were to come about, the government could not engage in massaging numbers or "performance engineering," but instead needed to focus on actually accomplishing tasks.

But Zhang did not focus solely on economic development. His general tone echoed a five-year plan that commits billions of yuan to educational programs, social security, and ethnic minority programs, as well as planning for further cleanup of Dianchi Lake and new forest conservation programs.

"Out of everything, people's livelihoods are the most important," said Zhang. "Livelihoods are issues of great concern to modern societies, and the government can do practical things to help common people."

The national five-year development plan approved by Beijing in October of last year also contains a strengthened focus on social welfare and the environment.

If this news item is copied from somewhere else, this fact should be noted in the first paragraph. Simply giving a link is not sufficient.

I read a similar news item on Monday, in "Yunnan Xinxi Bao", I think.

One thing struck me in that report. In his bio at the top, his ethnicity was listed as "Han."

Why does it need to be clarified that he is Han?

Its the norm in China when officials are being introduced or presented for a position that the media give all information, name, ethnic group, sex (especially if its a female), place of birth etc

Odd, my girlfriend's ballot must have gotten lost in the mail.