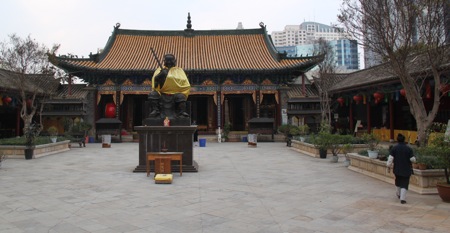 Editor's note: Kunming resident Matt Lewis is an avid cyclist and explorer of the city. He filed this report with GoKunming after a recent visit to Zhenqing Culture Square. If you would like to contribute to GoKunming please feel free to contact us.

When walking amidst downtown Kunming's modern office towers, traffic gridlock and general hustle and bustle, it is easy to feel the urge to escape to somewhere peaceful and calm. Zhenqing Culture Square (真庆文化广场) offers exactly such an urban sanctuary.

Located on the northeast corner of Tuodong Lu's intersection with Baita Lu, this complex of Yuan, Ming, and Qing Dynasty structures showcases 600 years of Kunming's architectural history. It also rewards visitors with the sort of serenity and sense of China's history that has come to be in short supply in Kunming as much of the city's old quarters are razed to the ground. And thanks to the efforts of the Kunming government and private donors, it's free. 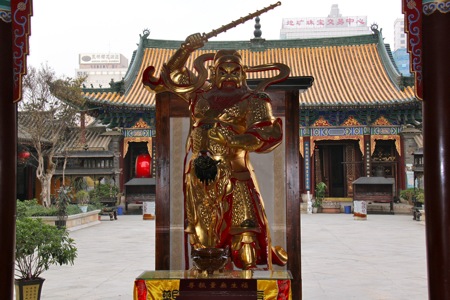 Entering from Tuodong Road, one passes through Shanmen (mountain gate) out of the noise of the street and into the pleasant interior of the complex.

Directly ahead, Ziwei Palace houses a shrine to the Daoist deity Ziwei Dadi (紫微大帝). This unusually-shaped structure has a single-eaved construction with a hip and gable roof: at the ends the eaves split into two ridges and turn upward, housing a range of beast-like figures underneath.

Continuing north through the complex brings one to the Laojun Palace (老君殿). This Yuan Dynasty-style Daoist structure contains a statue of Laozi, the father of Daoism (or Taoism), whose book Dao De Jing (道德经) greatly influenced the course of Chinese culture.

Directly east from the Ziwei Palace, one finds the Dulei Mansion (都雷府). Originally built in 1425 and housing the Thunder God and Fire God Palaces, the Dulei Mansion also contains the Qingfeng Pavilion (清风亭), which was added in 1816 during the Qing dynasty. The exquisitely carved Qingfeng Pavillion was built to promote the idea that "wishing on heaven gives birth to good people, and good people often carry good deeds."

The Thunder God Palace (雷神殿) honors the deity who beats heaven's drum, sending thunderclaps to earth and controlling fate, meting out justice, and telling good from evil—among other divine responsibilities. Just north and through a charming garden, the Fire God Palace (火神殿) is also important because the Fire God is charged with safeguarding people's spirits. 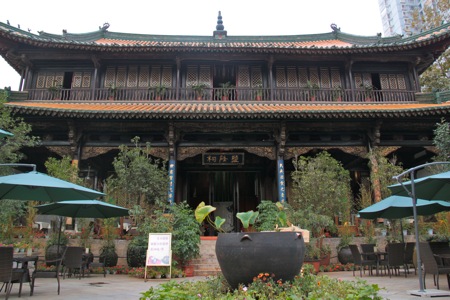 At the northern end of the Zhenqing Guan complex stands the impressive Yanlong Ancestral Hall (盐隆祠, or something like Salt Prosperity Ancestral Hall), with its yellow and green glazed tile roof. It was constructed by Kunming's salt dealers in 1881 and served as their meeting place. The salt merchants' businesses were at the time clustered around Tuodong Lu to such an extent that it was known as "salt merchant street" (盐行街). 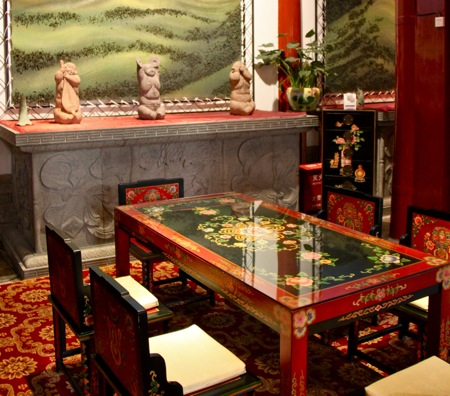 Inside the Lanmao tea rooms

Nowadays Yanlong Hall houses an upscale restaurant serving pan-Chinese cuisine. The adjacent Lanmao teahouse was one of the high points of our visit. The owner was present to tell us about the attractive furniture contained therein, which he has collected from around China. We also found the tea selection to be excellent and the staff knowledgeable and friendly. Sipping some tea at the tea house—which we were also pleasantly surprised to find offers coffee, wine and free WiFi—completed our feeling of tranquility. 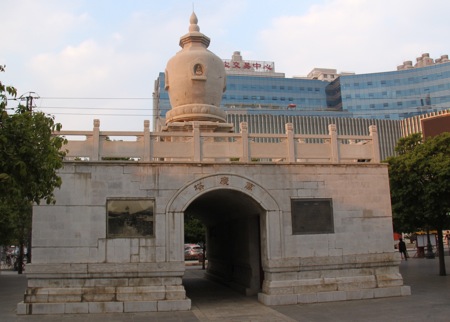 The final structure to check out is Wanqing Pagoda (万庆塔), which stands in the northwest part of the complex a little separate from the main cluster of buildings. It is a copy of the White Pagoda (白塔), which was built in the Yuan Dynasty as part of the Wanqing Temple. The temple was then destroyed during the Ming dynasty, but the Pagoda remained until 1913 when it was pulled down in order to widen its namesake, Baita Lu.

The current incarnation was then reconstructed nearby in the original Tibetan Buddhist style. The base of the Pagoda contains a small walkway and it is said passing through this tunnel is way of paying tribute to Buddha.

Getting there
This complex is a little-known gem and well worth the visit. Getting there is easy: cab fares are cheap from within the city centre, or visitors can alternatively take bus number 1 from Wenlin Jie, or buses 61 or A1 from Jinma Biji Fang. For any of those buses, get off at the Baita Lukou (白塔路口[世博大厦]) stop, diagonally opposite the Zhenqing Guan complex.

Thanks for the article, Matt and GoKunming folks. I'll check this out this Saturday, hopefully.

An Auguste Francois photo from the turn-of-the-century can give you an idea of what the Baita pagoda (and road) looked like:

Excellent article. Now, would someone tell me the Chinese names of these references - Tuodong Lu's intersection with Baita Lu. Will be in Kunming in a month, so would like to bump around when I get there. With just 2 days there (on way to Yuanyang), I think this is a good spot (some major spots I have visited some years ago). Knowing ahead of time saves time. Thanks.