Officials: New Kunming airport to be operational by the end of 2011 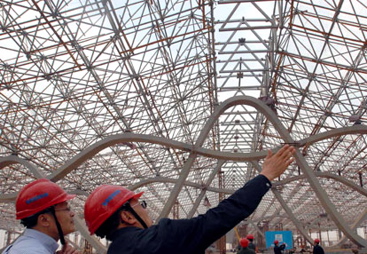 Officials overseeing construction of the new Kunming airport met with representatives from international airlines on Tuesday to reassure them that the airport's first phase will be operational by the end of 2011.

Representatives from 15 international airlines, including those based in Europe, the United States, Southeast Asia and South Korea visited the airport site to gauge its progress and begin considering Kunming routes.

The representatives were shown that the terminal building's steel skeleton is complete and workers have begun installing the roof and windows. Between now and June of next year, the terminal building and two runways will be completed along with the requisite mechanical, electrical, and computer systems.

If work is completed according to schedule, the airport will undergo a testing phase before opening late next year.

Located in the 160-square kilometer airport economic zone about 30 kilometers northeast of downtown Kunming, the airport is expected to become one of the main international hubs in China and serve destinations around the world.

It will be linked to Kunming by a new highway, currently under construction, and Kunming's light rail network, which could be completed as soon as 2015.

The anticipated completion of the new airport can't come soon enough, as the lone runway at Kunming's current Wujiaba Airport has recently begun showing major signs of stress due to a low water table and around 500 daily flights.

So what is the current predicted opening date?

Next month, in theory...