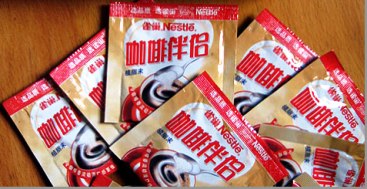 It may be 2009, but it appears that in some sectors of corporate Yunnan, other companies' intellectual property rights mean very little.

Yunnan-based coffee producer Hogood Coffee (云南德宏后谷咖啡有限公司) is playing the victim after government employees confiscated Hogood non-dairy creamer which was illegally using the "Coffee-Mate" (咖啡伴侣) name, which in China is a registered trademark of multinational food and beverage giant Nestlé.

On September 3, around 12,000 bags of Hogood-produced non-dairy creamer packaged under the name "Coffee-Mate" were seized by Industrial and Commercial Bureau employees in the Panlong district. Panlong officials confirmed the next day that the confiscation was a response to a complaint filed by Nestlé.

However, on September 15 a Nestlé China public relations manager reportedly claimed that Nestlé had filed no such complaint. The source of the complaint is currently under investigation by the Panlong government.

Hogood CEO Xiong Xiangru (熊相入) told reporters after the confiscation that the company had no idea that Coffee-Mate was a trademark – despite it being clearly marked as such on all Nestlé Coffee-Mate products.

Xiong's denial seems more implausible considering that Hogood has been a supplier of beans to Nestlé, which it grows on farms in Dehong in southern Yunnan.

The Yunnan Coffee Industry association is standing behind Hogood, insisting that Nestlé should not continue to "monopolize" the Coffee-Mate trademark and that Nestlé should let Chinese companies use the name on their own products.

Yunnan Coffee Industry Association vice secretary-general Hu Lu (胡路) put the following argument forward for why Nestlé should rescind the trademark that it has successfully built up in China and throughout the world:

At the same time, many people in the industry as well as consumers commonly use "Coffee-Mate" to refer to coffee flavor additives. If the national Industrial and Commercial Bureau allows Nestlé to monopolize this term, it will obstruct the coffee industry from legitimately and reasonably using this name, and will lead to some consumers being dissatisfied.

Other Chinese coffee producers have been fined for violating the Coffee-Mate trademark in the past, according to the report.

Acknowledging that Nestlé was one of the main driving forces behind the development of China's coffee market, Hogood CEO Xiong pleaded to "big brother" Nestlé to rescind its Coffee-Mate trademark in order to bring "fair competition" to the Chinese coffee market.

The main questions that this particular episode of intellectual property rights violation raises are:

1. Should Nestlé or other companies with trademarks that have entered everyday parlance as a term representative of a certain type of product (think Coke, Hoover, Xerox) be forced to give up their trademarks because they've been marketed successfully?

2. If Nestlé were to bow to the weak logic of the above arguments and revoke its Coffee-Mate trademark in China, what would prevent the trademark being snapped up by a Chinese company who would prevent other companies from using it in China?

3. Is it possible that a company calling itself "Hogood" in English is unwilling to invest the necessary resources into the development of its own corporate identity and product branding, preferring rather to whine about "fair competition" after blatantly violating a registered trademark almost eight years after China's accession to the World Trade Organization?

The argument is not at all flimsy if in fact the term 加菲伴侣 has in fact become colloquial and used to refer to all coffee flavour additives. It's something called a genericized trademark. Look it up.

sounds like there's a difference of opinion on this subject across different jurisdictions - the wikipedia article contrasts the US and Germany. so, a key question is the view the Chinese legal system takes. any Chinese lawyers out there?

this must be a concern for any corporation with a major brand, but especially so if the legal environment involved has a protectionist streak.

If you develop a product and brand name that dominates the market to the extent that it b/c a generic term for sth, you should not be penalized for that, and you should definitely retain the rights to your trademark. That's why royalties are paid for public singing of the song "Happy Birthday to You" even though it's b/c so common as to be the standard, at least in countries where intellectual property rights are honored.

Chinese steal everything, lie about everything, and want the rest of the world to give them everything. They produce poor quality products, dangerous products, and are generally some of the most irresponsible people on the world scene. Fine them, revoke their licenses, do whatever it takes. Kick them out of the WTO. They are not compliant, never intended to be, and never will be. Flush China and do the world a favor!

I agree with smart observer....

The Chinese way of doing business is totally different than WTO standards, this is one reason Canada is hesitant in selling a huge share of an oil giant NEXEN to China....if you read between the lines Canada's government says the same as above although in a diplomatic tone.

most of the time this happens. Now everyone doing a violation of the trademark. That's why www.trademarkterminal.com/ always suggests every business owner to register a trademark so that no one can use your business name.

The last post proves that Spam is alive and well and more than just a registered trademark.

Yes, Spam is even Covid proof.
Still amasing that Spam reacts to a more than 10 year old article ;-)

What are some American good food ideas for children who are lactose intolerant and have food allergies? I am moving in with my husband in New York and so don't want to disturb the diet routines of my daughter whom I have raised in Italy.