The 15,000 kilometer proposed transport corridor would pass through 17 countries – in China it would pass through Guangdong, Guangxi and Yunnan before entering Myanmar and passing through Bangladesh, India, Pakistan, Iran and Turkey before continuing into Europe.

Qin said the rail and road network would stimulate trade and by providing an alternate route to Europe would also promote China's energy and economic security.

Qin was in Beijing with other Yunnan officials for meetings with the central government to discuss a proposal to help Myanmar build more than 300 kilometers of road and rail to link Yunnan's rail network with South Asia's highway network.

If built, the proposed land bridge would join the two existing transport routes across the Eurasian continent - one spanning 13,000 kilometers from Rotterdam to eastern Russia and the other covering 10,900 kilometers connecting Rotterdam with Lianyungang in eastern China's Jiangsu province. 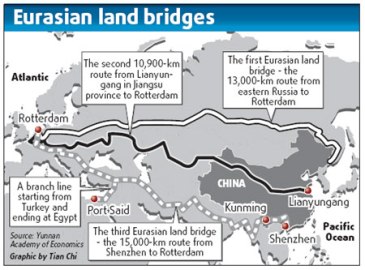 Qin said that a branch line for the third land bridge extending from Turkey through Syria and Palestine into Egypt would also facilitate the transport of goods manufactured in Guangdong's Pearl River Delta to African markets by cutting 6,000 kilometers off of the Guangdong-Egypt sea journey.

Scholars first raised the idea of a third land bridge two years ago, but no progress has been made - despite only needing to add approximately 1,000 kilometers of new highways and railways to existing transport infrastructure.

thats interesting. I wonder if they'll lay some data cables at the same time. Right now all data comes in and out of China via Tianjin, Guangzhou and Shanghai. Therefore to get to Europe from Yunnan it has to go across china, across the pacific, across the US and then across the atlantic making it almost unusable. If they had data pipes going West on the proposed road/rail routes that could speed things up significantly.